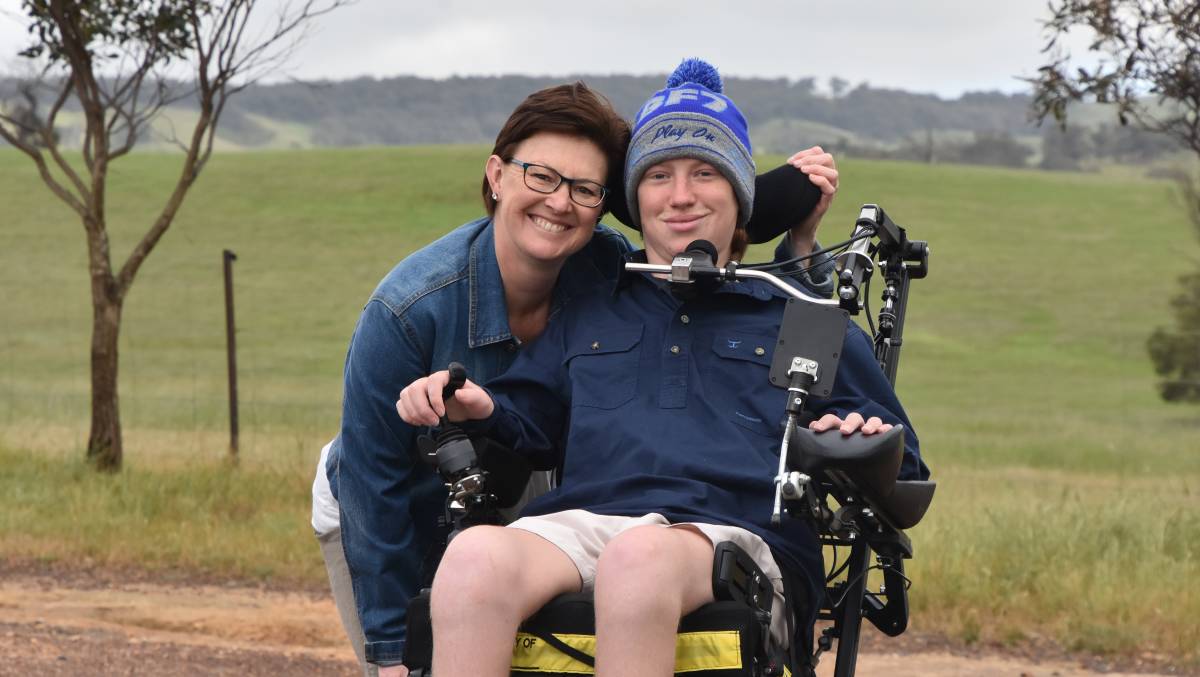 BRAVE: Willowmavin boy Harvey McKeever, 16, pictured with his mum Renae, became a quadriplegic when he fell of his motorbike earlier this year.

Farmers have thrown their support behind a paralyzed 16-year-old boy.

Sixteen-year-old Harvey McKeever remembers the moment his mum almost "wrote off" the family ute after he fell off a motorbike on the family's Willowmavin farm in February.

"As soon as she saw me, she jumped out of the driver's seat and left it in drive and it just kept rolling," Harvey, who was in the Royal Children's Hospital during the interview, said.

His mother, Renae, has a different recollection of the events which unfolded just weeks out from Harvey's 16th birthday, and disputes whether she left the car in gear.

"Until he spoke, I thought I'd seen the end of him," she said.

It was a summer day just like any other when Harvey was out riding his motorbike, self-described as his "home away from home", when the accident occurred.

Hours earlier Ms McKeever had told her son to don the appropriate personal protective equipment, including a helmet, which she thinks probably saved his life.

"The thing doctors have made very clear is that spinal cord injuries are very individual to each patient and two patients could have the same injury but recover quite differently," she said.

Harvey was out riding his motorbike when he attempted a jump, causing him to fall off his bike and resulting in a broken fourth cervical vertebra.

Specialists are unsure what movement Harvey will regain in his body and believe he will be using a wheelchair, operated by small finger movements, for the foreseeable future.

It comes as a group of agents and farmers have thrown their support behind the family of four and are set to raise money for Harvey's recovery later this month.

His parents and younger sister, Seren, 13, remain hopeful and Harvey has his sights set on an all-terrain buggy which he says will help him round up the cattle and sheep on his parents' and grandparents' neighbouring farms.

"I'd love to get off my arse and go for a walk," a resilient Harvey said.

Harvey is nearing the end of a two-week intensive rehabilitation stint in the Royal Children's Hospital, and doctors hope community-based rehabilitation will prevent the family from having to travel to Melbourne three times a week - a two-hour return trip often exacerbated by traffic.

While Harvey said his stay in hospital had driven him "mental", signs of his progress following the accident 10 months ago are promising.

Part of his in-patient rehabilitation included using a functional electrical stimulation bike, which is used to help keep muscle tone in his arms, "if they do wake up", he said.

"It does more than just muscle work, it's for blood flow, blood pressure, oxygen and so much more," Ms McKeever said.

The bike costs $60,000 and doctors say the piece of equipment is instrumental in his recovery.

"We have to hold onto that hope and push forward," she said.

The cost of recovery is set to be mostly covered under the National Disability Insurance Scheme, but the family has still been required to undergo home renovations in the meantime and purchase a wheelchair-suitable vehicle to transport Harvey to medical appointments.

Harvey said the wheelchair he uses is not suitable for the hilly terrain on the family's farms, and hopes to one day purchase a modified Polaris or Can-Am off-road buggy to move around the farm.

His injury and inspirational attitude in the wake of his accident has prompted agents at Pakenham's Victorian Livestock Exchange to hold a special sale fundraiser for the aspiring diesel mechanic.

Ten cattle have been donated by farmers, and agents will sell the cattle at the VLE's fortnightly store sale on November 25 with proceeds to help with Harvey's recovery.

One of the event's organisers, Lisa Newnham, Alex Scott & Staff Pakenham, said it was not too late for farmers to get behind the cause and put a beast up for auction.