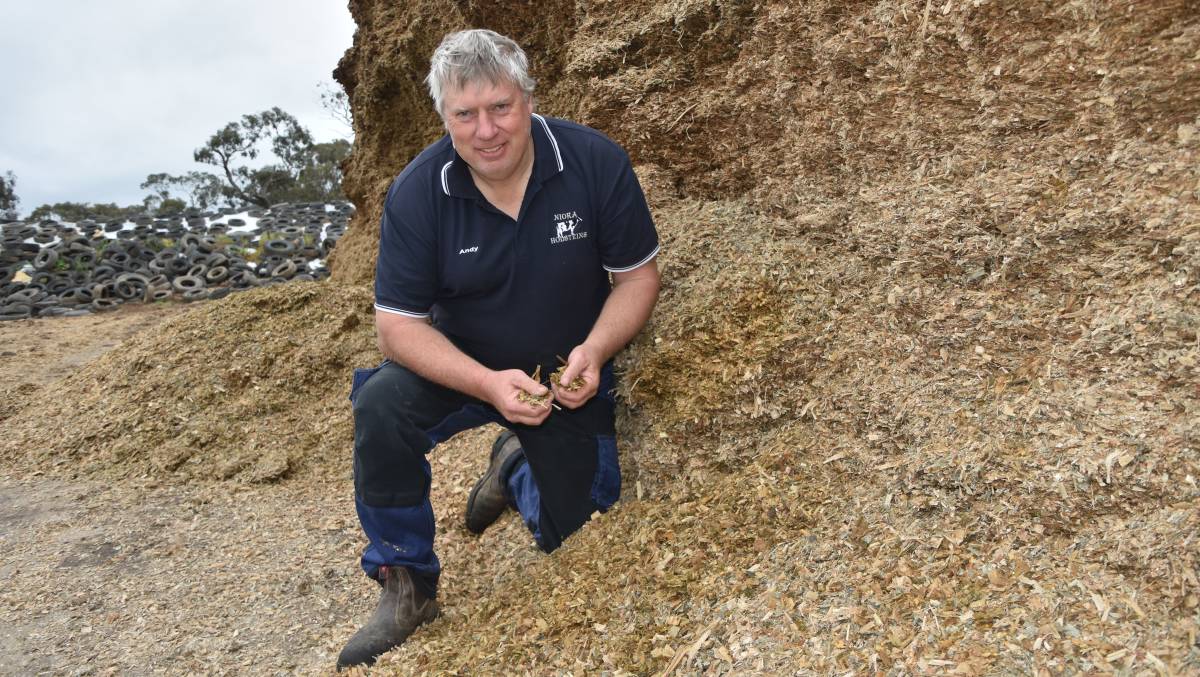 MANY OPPORTUNITIES: Tongala dairy farmer and Murray Dairy chair Andrew Tyler with some of his maize silage on his northern Victoria dairy farm.

Chemicals and fertilisers are on the rise due to a number of reasons.

Last financial year was one of Victorian dairy farmers' most profitable in more than a decade, despite trade tensions between Australia and China believed to be causing an increase in input costs of fertiliser and chemicals.

Better seasonal conditions and reduced irrigation costs aided farmers in the north of the state to record their best financial return in 15 years, Agriculture Victoria and Dairy Australia's 2020-21 Dairy Farm Monitor report has revealed, while farm profits in the south-west slipped last financial year because of big land value increases.

Tongala dairy farmer and Murray Dairy chair Andrew Tyler said one of the big advantages for the industry in northern Victoria was some of the widespread rain which had filled water catchments across the region.

"Storages in the Goulburn system are probably as healthy as they have been for seven years," Mr Tyler said.

"We've found that the allocation market has eased off and that's good news because water is one of our biggest inputs."

However, the cost of cheaper water and its abundant availability in 2021 is somewhat subsidising the increasing costs of two other key inputs for dairy farmers - fertilsers and chemicals such as glyphosate.

The average cost of glyphosate has jumped to $11 a kilogram, up from $5 a kilogram two years ago, analysts say, and dairy farmers fear the cost of increasing inputs may not be short lived.

Likewise, urea costs are at extreme levels and this week hit a 13-year high, according to Thomas Elder Markets, which said it currently cost 2.2 tonnes of wheat to purchase one tonne of urea.

"It's certainly impacting our margins but the big picture is still pretty positive and optimistic."

According to Mr Tyler, the total input cost per hectare, excluding water, to plant corn or maize silage is around $1850, compared to last year at $1570/ha.

"When we roll into 2022 and we start looking at sowing paddocks, we'll have a bit of room to lower our inputs," Mr Tyler said.

"I think most farmers will look at sowing with less kilograms of fertiliser per hectare and spend a similar amount or a bit more on fertiliser but at the same time lowering the sowing rate."

According to the 2020-21 Dairy Farm Monitor report, farmers in northern Victoria experienced a massive 44pc increase in EBIT to $1.76 a kilogram milk solids.

A driving factor of the soaring profit was a significant 27pc drop in purchased feed costs, along with milk production which remained stable on a per cow basis.

Mr Tyler, who milks about 900 Holsteins and irrigates just under 400ha, said he was "juggling the inputs".

"When a challenge like this comes you look at other opportunities and we've certainly spread a lot more cow manure on our cropping country," he said.

"With our own spreading of dry manure and also out of effluent dams and the water costs coming off a bit, we're looking at getting silage in the stack at basically the same price as last season."

The dairy report found most Victorian dairy farmers recorded a profit last financial year, with 75 of the 80 farms returning a positive EBIT despite a lower milk price.

Thomas Elders Markets commodity markets manager Matt Dalgleish said the rising costs of fertilsers such as phosphate was the result of a combination of supply chain hurdles, trade tensions and environmental dilemmas.

"In recent months we've had Cyclone Ida in the southern parts of America which caused damage to infrastructure that was relevant to export fertilisers from that part of the world," Mr Dalgleish said.

"Then on the heels of that we've had surging gas prices in Europe and gas is a massive input cost to fert which has added an extra cost to produce it.

"Then just late last week there was a directive made by China to its state-owned enterprises that they were not to export any phosphate until June next year which has pushed pricing to a whole new level."

State-owned enterprises in the province are responsible for about 30pc of all phosphate exported from the region.

He said supply chain limitations, including getting access to shipping containers, had also been a factor in the rising costs of chemicals.

"In terms of glyphosate it's not the biggest input but for dairy farmers who do a summer and autumn spray at three litres a hectare over the next six months, it adds only an extra $10/ha to their pasture program," Mr Nagle said.

"It's not a lot but the more significant factor will be those farmers who don't secure glyphosate supply may find it difficult to find in the autumn."