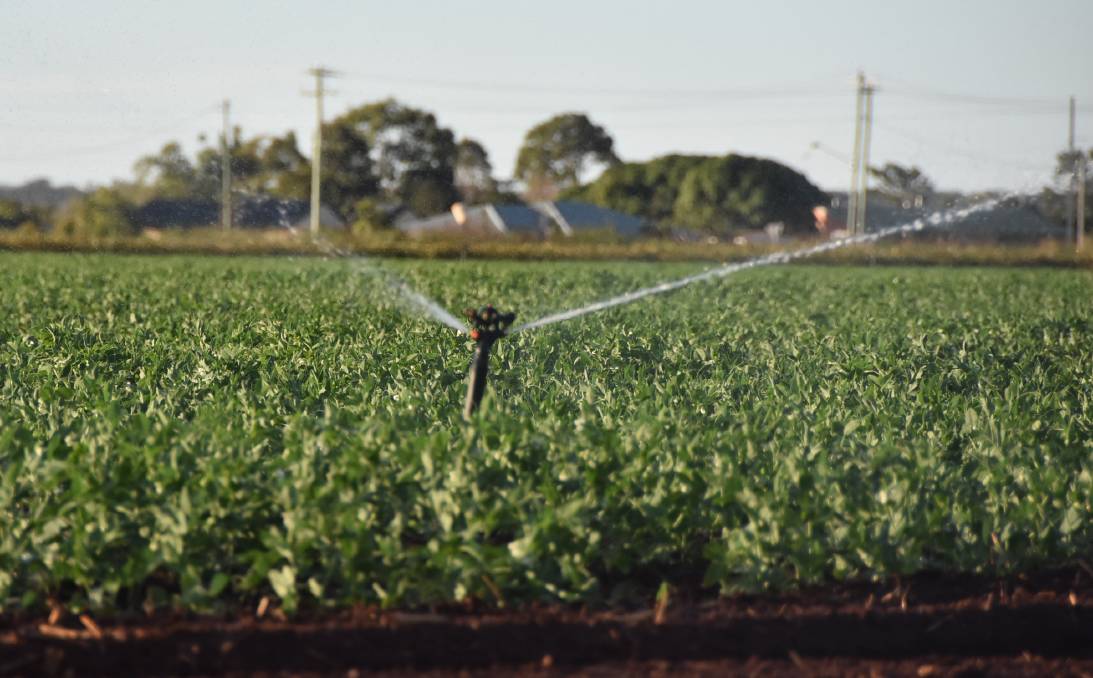 TOUGH: Farmers within 100km of Melbourne face tight controls on building homes on their land.

Many hundreds of Victorian farmers will be caught by proposed controls on building homes on their land.

Many hundreds of Victorian farmers will be surprised by proposed new controls on building new homes on their land.

The legal change is a feature of new proposed new planning laws in a 100km radius of Melbourne.

The zone reaches beyond and includes Warragul, Seymour, Yea, Kyneton, Winchelsea, Daylesford to the outskirts of Ballarat.

Under Victorian planning, farmers on more than 40ha of land have an as-of-right to build a home on their property.

Under these proposed laws, that right to build a new home, or possibly replace the existing farmhouse, would be removed for farmers within 100km of Melbourne.

Those farmers looking to cash in the growing shift from city to country through subdivisions would find it much more difficult as well.

One farmer has already slammed the plan as "city control by stealth".

The farmer, who did not to be named, owns a large property within the 100km zone and said he knew nothing and believed few others would either.

He said the fact people had to read to almost half-way in an often technical 100-page document to learn of the farm building ban "meant it wasn't supposed to be found before it became law".

Victorian Farmers' Federation land management chair Gerald Leach encouraged more farmers to read the document and then comment on it if they were concerned.

"The objective is to stop people cutting up farm land but there is always a problem when you set boundaries like this," Mr Leach said.

The little known "Planning for Melbourne's Green Wedges and Agricultural Land" is still out for comment until February 5 at the Environment, Land, Water and Planning Department.

The new planning zone takes in some of Victoria's most productive farm land - with an economic output of $5.79 billion in 2018.

Farms within the 100km radius produce around 10 per cent of Victoria's gross value of agricultural production.

The 100km ring around Melbourne includes many hundreds of farms. Map: Environment, Land, Water and Planning. 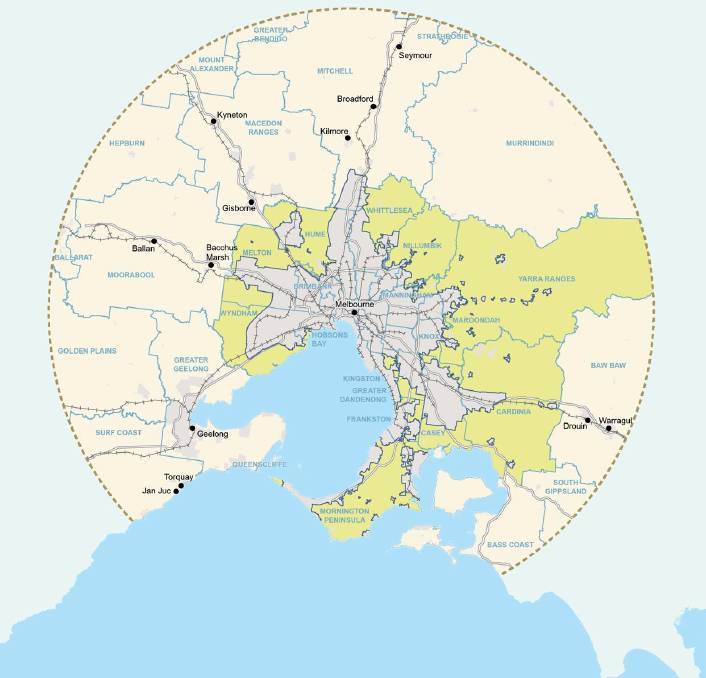 FROM ABOVE: A much wider ring around Melbourne will captures hundreds more farmers under proposed new planning controls. Map by the Victorian government.

Government planners want to cater for the non-stop growth of Melbourne, forecast to reach a population of eight million and become Australia's biggest city in the next 30 years.

A 50km planning zone was introduced around Melbourne by the Hamer Liberal Government in the 1960s.

Now, the Victorian Government says, that zone needs to reach out to 100km.

"We need to ensure our green wedges and our agricultural areas, are used in ways that that keep Melbourne liveable over the next 30 years as its population grows to eight million," the planning paper says.

The new zone would encompass a further 16 municipalities either wholly or partially.

In the preamble to the document, Planning Minister Richard Wynne states: "The harder we've looked at the issue the more certain we've become of the fact that our green wedges and agricultural areas are the reason why Melbourne is the best part of the best place in the world."

Planner say existing policy and planning measures are no longer effective to control:

There is much discussion about the need to protect the right to farm but the overriding objective is to "achieve greater certainty and consistency of planning and decision-making across the study area to realise a sustainable future for our growing city and state".

Currently, Victoria does not have separate legislation that specifically protects farming activities.

Existing planning laws "have not prevented the loss of productive agricultural land to urban uses over time".

"Proposals to establish dwellings and other incompatible land uses in agricultural areas have been considered in a piecemeal and ad hoc manner, and are often decided in favour of individual outcomes over regional and/or community benefits," the document states.

"To protect Melbourne's remaining agricultural land, a proposed option is to introduce new legislation that strengthens the right to farm.

"Such legislation would ensure that farming activities are protected from encroachment by sensitive uses and delineate that primary responsibility for mitigating impacts of lawful agricultural operations (e.g. dust, noise and odour) rests with the 'agent of change' - the person or organisation who introduces a new use or development into an existing environment."

Right to farm laws would also mean new or existing farms wanting to establish or expand "will be responsible for attenuating any effects caused by that change on nearby sensitive uses".

"Over past decades, Melbourne's green wedge and peri-urban areas have accommodated high levels of residential development. Although state policy seeks to limit new 'lifestyle' housing developments in rural areas, in practice many new dwellings constructed in rural areas do not have a farming purpose."

Planners said there are currently no planning controls in the Farming Zone and Rural Activity Zone that prevent the subdivision of agricultural land into smaller lots for an existing dwelling.

"The options proposed in this paper would bring the subdivision provisions in the Farming Zone and Rural Activity Zone in line with those in the green wedge zones and prevent small lot excisions in peri-urban areas.

"In the Farming Zone, a dwelling is an 'as of right' use if the land meets the minimum lot size requirement of 40ha and the dwelling is the only dwelling on the lot.

The document said community feedback claimed decisions by councils, at times against the professional advice of their officers - have often favoured the approval of dwellings in rural areas.

Between 2011 and 2018, about eight out of every 10 dwelling applications lodged were approved, with almost 4500 permits approved for dwellings in rural zones within 100km of Melbourne.

This change would remove dwelling as an as-of-right use in the Farming Zone within 100km of Melbourne.

Once the farmer was forced to apply for a permit, the council or "responsible authority" would have to consider:

Whether the dwelling will result in the loss or fragmentation of productive agricultural land.

In a written response to Australian Community Media, the Environment, Land, Water and Planning Department said the importance of land on the green wedge and agricultural land would only increase in the future as climate change impacts where crops are grown and land close to Melbourne is relied upon more to grow food.

The change would not prevent farmers from building a new home on their property but they would be required to secure a planning permit.

The discussion paper canvasses a proposal that would require a new dwelling in a farm zone within 100 kilometres of Melbourne's CBD to have a permit.

Currently dwellings in the Farm Zone does not require a permit if there is only one dwelling on the lot and more than 40 hectares or larger than the specified area within the zoning rules.

The discussion paper is open for public consultation at https://engage.vic.gov.au/gwal.