A look at how smaller dairy processors are coping in the wake of new restrictions. 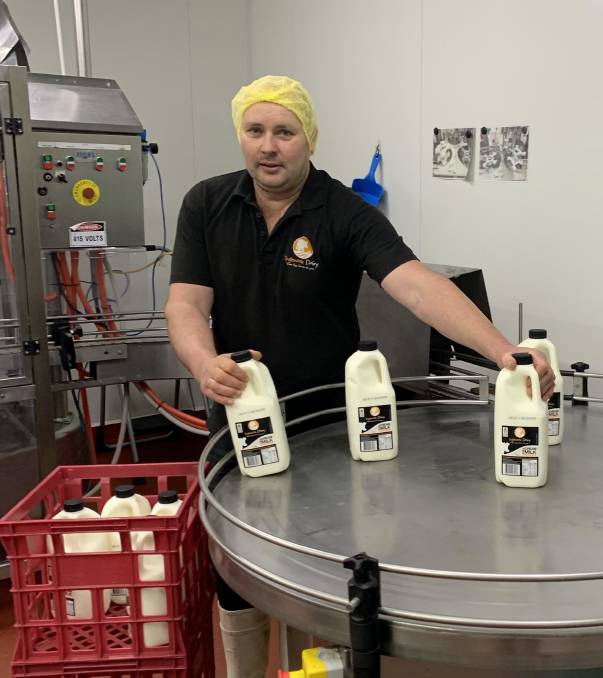 EVALUATING: Inglenook Dairy managing director Troy Peterken says the pandemic has changed how his business sells milk, as retail demand for his product continues to grow.

Product orders were being cancelled left, right and centre and milk was being returned to the processing factory at Dunnstown as cafes were forced to close.

A silver lining during the pandemic for smaller, hands-on operators like Mr Peterken's dairy brand has been the opportunity to re-evaluate its customer base, and to better connect with core consumers.

"When we were locked down, we realised the retail market made up only 20pc of our business so we took the initiative of focusing on the sector which at the time was experiencing panic buying," he said.

"Our customer base did a complete flip and that was due to a lot of work at our end making sure shelves were stocked in both local stores and major supermarkets."

During the series of early lockdowns, Mr Peterken would drive from store to store with a truckload of milk, a laptop and a mobile printer, noting how low their stock was and offering supermarkets a chance to restock.

"I'd find a manager and ask them to punch in an order while I had milk out the front in the truck," he said.

"I waited for the order to come through, print it out and load their shelves... they must have thought I was a serial stalker."

An advantage for smaller processors like Inglenook Dairy is the fact the brand has fewer hurdles to jump over to fill orders, leading to quicker turnaround.

"People might not have tried our milk before the pandemic, but because we were able to meet demand during that panic-buying phase, we've noticed people are buying more of our milk now," he said.

"Because we could replenish our milk, and people were happy to pay more because it was on the shelves, people have really got behind our brand."

Turning direct to the consumer

Inglenook's grassroots story is not dissimilar to what another dairy processor at the opposite end of the state experienced this week when it had a series of large-volume cancellations due to the most recent lockdown.

Gippsland Jersey director Sallie Jones said the cancelled orders equated to 13 pallets of milk, or 9200 litres, which needed a home and had a fast-approaching expiry date.

At the same time, the major supermarkets - who would normally absorb some of the milk from smaller stockists - had reduced their orders, adding to woes of the Lakes Entrance-based company.

So, who better to turn to than their army of social media followers.

"We pre-sold all of that milk and we had 18 hours to organise ourselves and we made it happen," she said.

"The power of social media totally saved our bacon."

Three pop-up sites at Pakenham, Narre Warren and Glen Waverley were established where boxes of milk were sold for under wholesale price, causing traffic delays at the first two sites due to Gippsland Jersey's popularity and the commitment of their followers to support the brand.