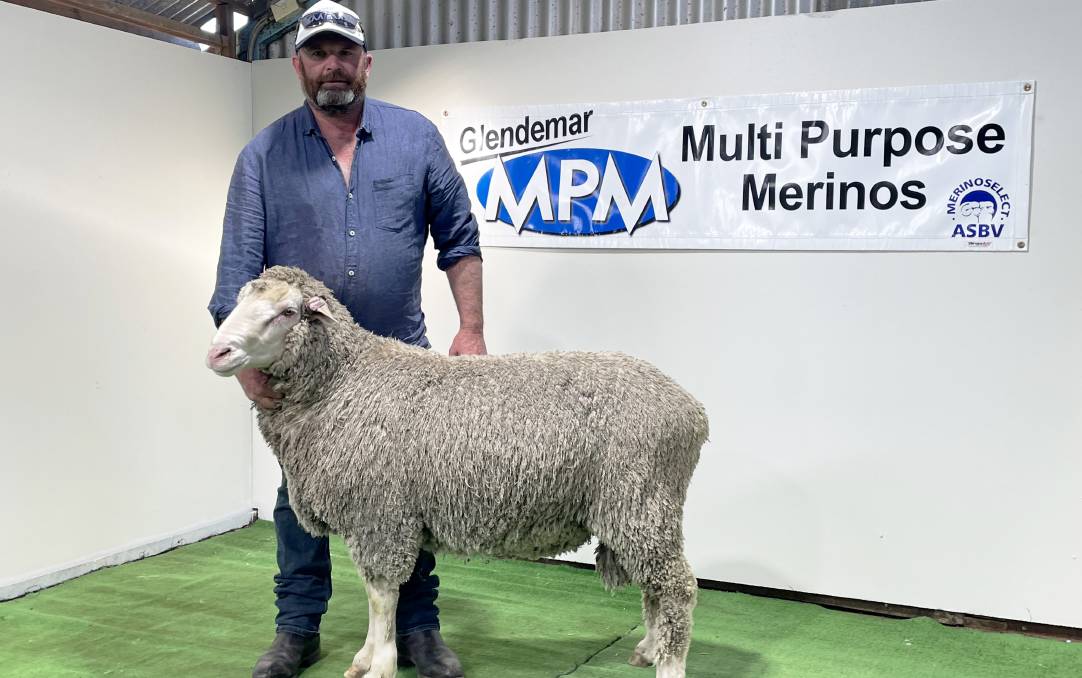 A TOTAL clearance at the Glendemar Multi-Purpose Merino stud, Kanya, has justified the direction the operation is taking, according to its stud co-principal Ben Duxson.

"I couldn't ask for anything more," Mr Duxson said.

"Long-term and new clients are backing the Australian Sheep Breeding Values and the type of animals we are producing.

"They are looking for the balance of the ASBVs, the early growth, muscle, fat and wool weight."

He said that was combined with high lambing percentages, turning off high numbers of stock.

"Clients then always have something to sell, whether it be ewes or wethers, into the booming meat market," he said.

He described the top-priced animal - Lot 44 - as a "pretty handy ram all around".

The ram was in the top five in the sale for growth, muscle and staple length.

"He was in the top 30pc for wool and he is a double-copy P, so he's going to another MPM stud, and they are having great sales," Mr Duxson said.

"He will go up there and breed great rams for Outback.

"Being a double copy of poll, it's important we keep the gene moving through him - he has got more chance of throwing more polls than horns."

He said the ram had been used at Glendemar.

"We are still in transition to getting the horns off, and getting more polls for ease of care, animal welfare and management," he said.

He said Glendemar had sold to Outback previously.

"Richie only purchased the stud in the last three years - previously, it was owned by Peter McKidd, who was a 30-year client of ours," he said.

"He started his breeding operation off our bloodlines.

"There are people out there looking for the MPM, to get those weaning percentages as well.

"It shows people are making money out of them."

He said he expected the whole ram selling season to show a trend to chase ASBVs.

"It's become stronger and stronger in the industry; that's what the buyers want, to breed with ASBVs," he said.

"They have got the new type of sheep, the non-mulesed ones that have the figures," Mr Drum said.

He said the interest on AuctionsPlus was "huge".