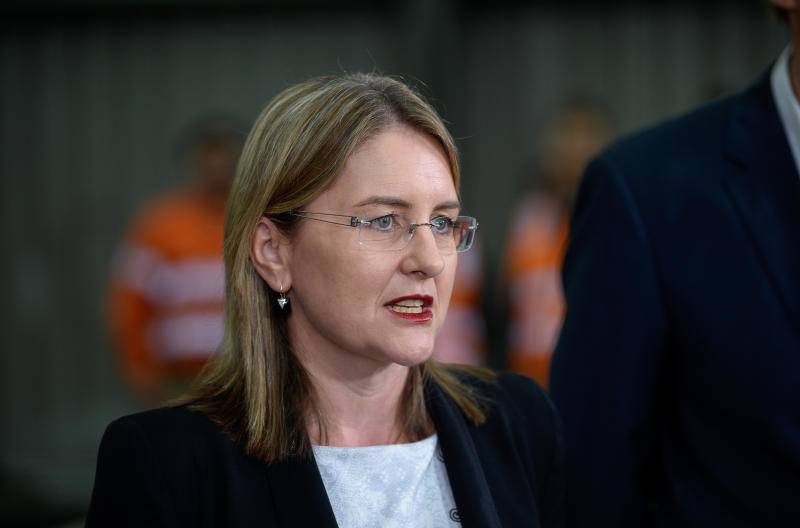 Trust us to get Murray Basin Rail right this time, says Allan.

The original business case for the Murray Basin Rail Project was "deeply flawed" and considerably underestimated the cost of the works, according to the state government minister in charge of the program.

The revised business case sees the state government tipping in $48.8 million, while seeking $195.2 million from the Commonwealth to complete the work.

But it also recommends the Sea Lake and Manangatang lines remain broad gauge.

Ms Allan said it was neccesary to revisit the business case, as the original plans for the network upgrade were drawn up eight years ago.

"The original business case significantly underscoped the program of works and the budget needed to deliver them," Ms Allan said.

"The original business case was significantly flawed, it had significant deficiencies."

She agreed the original busines case was only a "desktop exercise.

"It was in a very different position to where we are now, with subsequent investments in both rail freight and passenger networks, in this part of the state.

"We have to plan for the future and the revised business case looks at where the network stands today and where the growth in freight and passenger networks will be, into the future."

Ms Allan said the new business case also considered congestion issues, around Ballarat, which could potentially be a significant constraint on future growth.

It also took into account advice and feedback from industry, as to what was required.

"The revised business case recommends a package of works, which we are recommending to the commonwealth.

"We should do this now, while we are contemplating what else the network may need, into the future."

Ms Allan said she was not in a position to commit to whether the MRBP would be completed, as originally planned.

"Let's get this work going, let's not get into this 'all or nothing' kind of contest, when nothing will eventuate."

In the revised business case, the authors argue "further standardisation of the network cannot be justified, on a value for money basis.

The government released the revised business case for the completion of the $440 million project, which stalled more than a year ago, after it ran out of money.

The business case opts for the fourth option, contained in the original scope for the project.

That option recommends: "optimising the capacity and performance of the current 2019 network, particularly the Yelta line, but without converting the remaining broad gauge lines to standard gauge.

But it also recommends continuing to route trains through Ararat for standard gauge services, and Ballarat for broad gauge, be maintained.

Ms Allan was asked why the state government had not released the business case to industry, although it had passed it on to the federal government.

She said the federal government didn't need to release the revised business case, in order to make funding decisions, either.

"We've been in discussions with the federal government for some time now," she said.

"This was the only project on the priority list we submitted, in order to assist the federal government's deliberations.

"They have had this business case, themselves, since May.

"Putting that aside, we want to get a big package of works progressed in addressing the upgrading of the rail freight network, in the Murray Basin region."

Ms Allan said the project was ready to go and would provide 500 jobs.

"The federal government needs to indicate sooner, rather than later, its support for this package, otherwise these jobs will not be supported, and we will not be able to get work started, ahead of the 2021 grain season."

Asked if the industry could trust the government to deliver the revised package of works, Ms Allan said it had take the best advice of its rail project engineers.

"They have gone out and walked the line, and told us this is the package of works, which will continue the forerard momentum, of investing in the rail freight network," she said.

"Lets not have arguments about the past, let's get on and deliver, what we can deliver, right now."

The Department of Transport was accountable for developing the business case review, while Rail Projects Victoria was identified as the agency, which would deliver the works.

"It is important to remember that the Federal Liberal and Nationals Government has already committed more than $240 million to this Victorian owned and operated asset," Mr McCormack said.

"It is also important to remember that the Victorian government was responsible for delivering this project and actively chose to lay 100-year-old steel as part of its "upgrade".

"I look forward to hearing the views of industry and communities on the proposal and document released by the Victorian government."

The Victorian Farmers Federation said it was extremely disappointed with the revised business case.

It called for the entire business case to be released, to enable farmers and industry to fully understand the future of the project.

VFF Grains Group president Ashley Fraser said whilst action and some commitment to the MBRP was welcome, it could not support the project until it saw every detail and a future vision for the promised regional freight rail network.

"Until we see the full revised business case for the Murray Basin Rail Project and have an understanding of the plan to deliver the project as promised, we cannot support this," Mr Fraser said.

"A fit-for-purpose rail freight network must provide an opportunity for competition amongst train providers, storage facilities, access to all ports and access to the national rail network.

"A commitment was made to build the Murray Basin Rail Project five years ago, including the standardisation of the Sea Lake and Manangatang lines."

He said not converting the lines to standard gauge, would cut them off from the Inland Rail network.

"Ultimately this means double handling of freight which results in added costs for farmers, especially in the important grain growing regions in Victoria's north west," he said.

"The original vision was for a modern, efficient regional rail freight network.

"While the execution to achieve this vision may have been flawed, the intention was right.

"It's incredibly frustrating that Metro projects seem to be topped up as costs blow out, but this vital country project is being ignored."