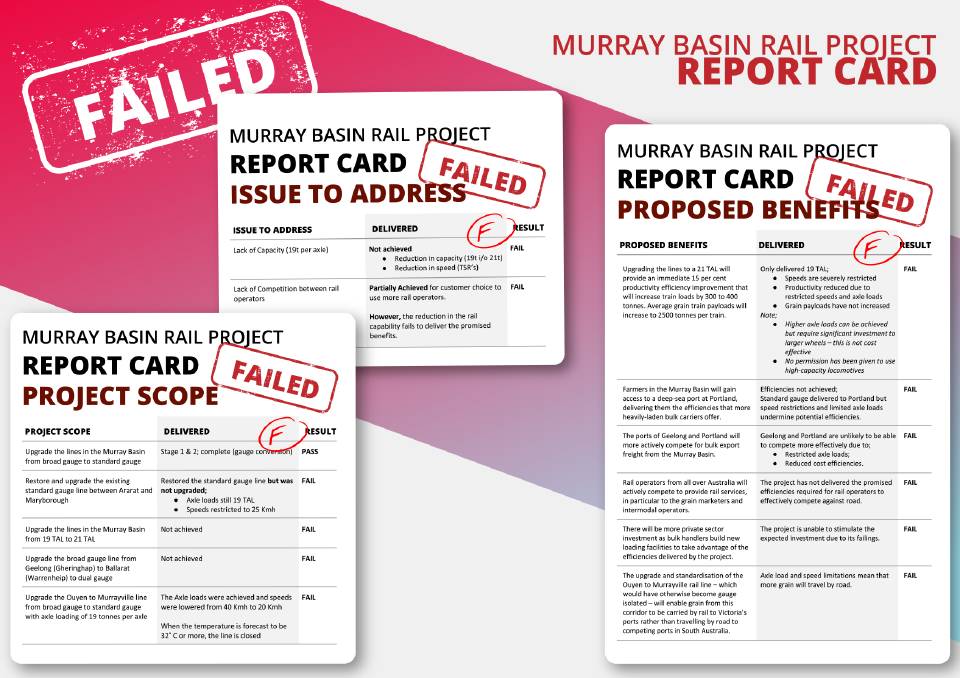 RAIL FAIL: The Rail Freight Alliance, which is made up of Victorian local authority representatives, has scored the progress of the Murray Basin Rail Project.

PN chief executive Dean Dalla Valle says rail track, dating from 1912, was repurposed, before being laid on new concrete sleepers and ballast, between Maryborough and Ararat.

"Unfortunately, to date, execution of the Murray Basin Rail Project has been poor - government runs the risk of taking its eyes off the prize," Mr Dalla Valle said.

"The end goals of the project could be lost, notably being able to run heavier freight trains at 21-tonne wheel axle weights, up from 19-tonnes.

"Bigger axle weights mean a bigger' bang for your buck' in terms of hauling bulk goods and commodities to port."

He said he was concerned to hear reports about the repurposing of track.

"This defeats one of the key objectives of the project to increase rail freight productivity, via increased axle weights," Mr Dalla Valle said. 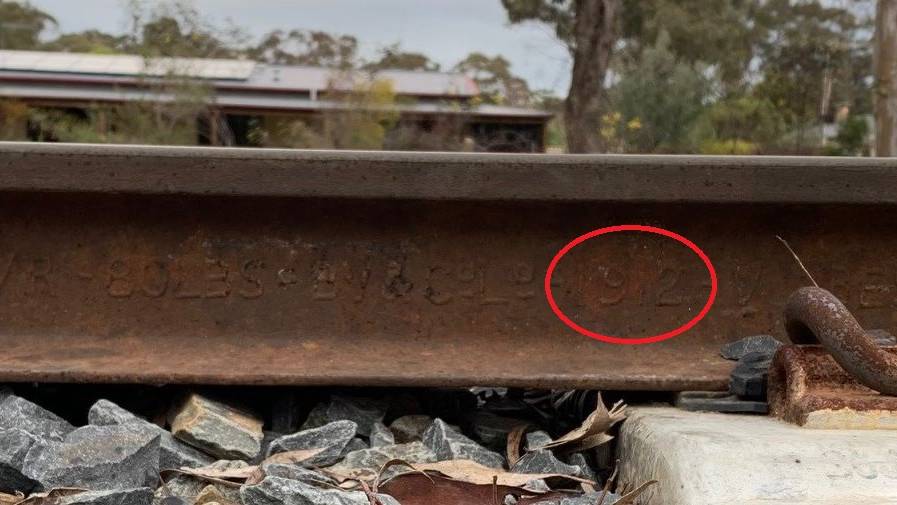 OLD STEEL RAIL: Steel, dated from 1912, has been used on sections of the Murray Basin Rail Project.

The MRBP aims to standardise rail freight lines servicing the Murray Basin region and increase axle loadings on those lines from 19 to 21 tonnes.

The state government recently announced the remaining $23m, of the $440m set aside for the project, would go on urgent repairs to the Manangatang line and a new business case.

Mr Dalla Valle said he was also concerned about the lack of staging areas for standard-gauge freight trains at Maryborough.

"Being able to stage, essentially stagger or sequence, the run of freight trains into port provides enhanced flexibility of services.

"Staging areas help to unclog the network; they act as a pressure valve."

But he said with a renewed focus and precision of execution by government, he was confident many of the problems could be resolved.

"If additional government funding is required to fix this vital regional supply chain, then so be it," Mr Dalla Valle said.

"The cost of having this project not meet its planned potential is a cost this country can ill afford."

Rail experts said it was not uncommon for track to be reused, or "cascaded," by being moved from one line to another.

But they said there could be concerns with the weight-bearing ability of the older tracks, as it would have lower strength than steel produced today.

A century ago, steel used to have a lower carbon content, and was less refined, meaning it could contain more impurities.

"What's underneath the rail is very good," Mr Hearsch said.

"The whole line has been virtually rebuilt, the formation has been replaced, and it has 100 per cent new sleepers and ballast.

"It should, in theory, be the best line in the state."

But he said the condition of the rail might be one area where there was a question over train speeds.

"Apart from line of sight issues (approaching rail crossings), there is no reason why there should be speed restrictions on a line that's been rebuilt."

"They are moving about as slow as the trains," Mr Tuohey said.

"Nothing has been done since before harvest last year; there's been no action."

The Rail Freight Alliance, representing Victorian councils, has written a report card on the government's delivery of the project.

Chairman, Councillor Glenn Milne said scope, issues to be addressed and proposed benefits of the project, had been rated by RFA, in consultation with industry experts.

"Industry has invested millions of dollars in new locomotives, rolling stock conversion to standard gauge and warehousing and the silence from the Victorian government on the future of this project is deafening," Cr Milne said.

"Companies have new locomotives sitting there, that can't be used, as the track isn't heavy enough to take them.

"They are using five locomotives when they could use two, which would be far cleaner, stronger and more fuel-efficient."

Industry had said the capacity of the lines had been reduced as the increased tonnage had not been achieved, while line speeds were significantly slower.

"What we know is there is less capacity on the track now than before the project started," Cr Milne said.

"It's costing them five dollars more a tonne, than if they hadn't touched the lines."

Reliable and swift transport was a crucial element in companies relocating to north-west Victoria and the Mildura area.

"Companies have invested in Victoria because they know they can get goods to market," Cr Milne said.

Other countries had issues with security and transport connection, something which was not the case in Victoria.

"We are getting to the point we're we are losing our advantage, and the government needs to wake up to itself," Cr Milne said.

He said there were also concerns about capacity, for the coming season.

"Carriers have told us if there is a bumper crop, and in some parts of Victoria they are looking at good crops, there will be a shortage of transport.

"If that happens, some of the crops will have to be dropped on the ground."

He said restricting speeds to 15-30 kilometres an hour was a "third world performance."

"It's terrible - it's worse than embarrassing," Cr Milne said.

"All we have asked for was the line to be fixed, the government agreed, but we have a railway line that wouldn't even cut it in the 19th century.

"All we want is we want it fixed, we don't want to lay into the government, but they took it on, and they have messed it up.

The road and rail system was not up to scratch, causing massive problems in getting goods to market.

"There's huge growth in product that's coming out of Mildura, but you haven't got the transport capacity to handle it," Cr Milne said.

"It's not an attack on a political party; it's a project that hasn't been up to scratch, no matter who's been in charge."

Victorian Farmers Federation Grains Group president Ashley Fraser said there had been enough talk, and it was now time to complete the project.

"The government is on record as saying it is the only government capable of delivering this project," Mr Fraser said.

"Now they are saying they will need federal government assistance and the business case needs updating, so let's get onto it."

Mr Fraser said there seemed to be plenty of money for level crossings in Melbourne, or recladding dangerous buildings in the city.

"At the end of the day, the rail network is a critical piece of infrastructure.

"We need it right for everything to grow and flourish.

"We want a commitment to the project and firm timelines."

Meanwhile, the government says its confident work on the Manangatang line will be completed in time for harvest.

The replacement of sleepers on more than 90 kilometres of track, between Lalbert, north of Quambatook and Manangatang began in early August.

Ballast shoulders were also being reinforced, to improve lateral stability.

The work was expected to be finished in late October, in time for harvest.

A government spokesman said the MRBP was about enhancing access and competition for Victoria's freight network and it's already delivering better, more efficient freight services.

"We'll continue working with the Australian Government, and will engage with the freight industry, to progress the next steps of the project," he said.

A V/Line spokesman said there were currently seven temporary speed restrictions (TSR's) in place, between Maryborough and Avoca and Avoca and Ararat.

They were mainly due to "line of sight restrictions" at a number of level crossings.

"As with any rail line, there are operational conditions that will remain in place requiring speed limits at certain points along the route like level crossings and curved track to ensure safety," the spokesman said.

"V/Line will continue to work to increase the track speeds to a minimum of 40kmh where it is safe to do so in the coming months.

"TSRs relating to drainage at three more locations will be removed in full in November."

Of the 80 level crossings in the 87km between Ararat and Maryborough; 37 had been removed or now had flashing lights, boom barriers and bells installed.

"There are no temporary speed restrictions in place due to rail condition or its age," the spokesman said.

"The rail is ultrasonically tested every 24 months and was tested for the reinstatement services."

Trains with a Tonne Axle Load of 21 tonnes (TAL) could currently run on the Mildura-Maryborough-Ararat rail line, providing they met network operating requirements, which included the correct diameter of wheels.

Federal Transport Minister Michael McCormack said he was still working closely with the Victorian government, to understand how best to address the current situation and potential next steps to progress the project.

"This will inform any future funding decisions," Mr McCormack said.