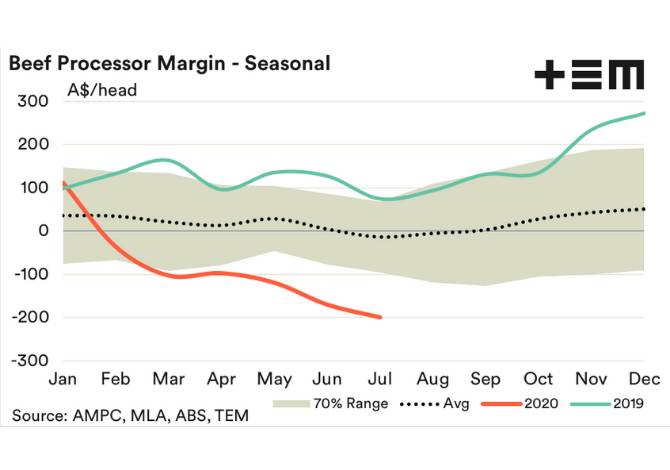 SLIDE: Below average margins are outside the 70pc of a decade. Supplied by Thomas Elder Markets.

JBS has closed its Brooklyn meat processing plant indefinitely after recording new coronavirus cases this week but the pandemic's disruption might be little more than the final straw for the abattoir.

JBS has closed its Brooklyn meat processing plant indefinitely after recording new coronavirus cases this week but the pandemic's disruption might be little more than the final straw for the abattoir.

In a statement, JBS Australia said it started the process of closing its meat processing facility in Brooklyn on Monday for an "indefinite period".

"The decision was reached following extensive consultations with the Department of Health and Human Services (DHHS) in Victoria," the statement said.

"The persistence of community transmission of COVID-19 in Victoria and the directives from DHHS have meant it is impossible to operate JBS Brooklyn in the current COVID environment.

"JBS Brooklyn's beef and lamb processing workforce will be stood down for the period of time it takes for the Victorian Government and the Department of Health and Human Services to contain the community outbreak of the coronavirus."

JBS confirmed more of its employees had tested positive to the virus this week but insiders told Stock & Land that commercial imperatives had played a big part in the decision. 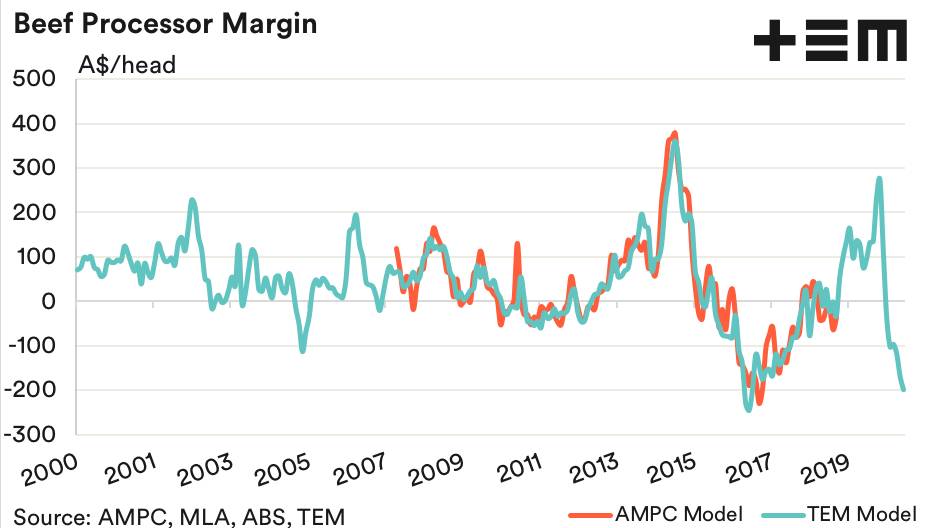 JBS' Brooklyn site is a multi-species plant that employs a workforce of 1100 people and is likely the biggest abattoir in the state.

Based on modelling, Victorian beef processors were likely making losses on every head of cattle since about February, he said, which would only be exacerbated by the 33 per cent reduction in production mandated by coronavirus restrictions.

"From a business perspective, if they've got alternatives to send product to, and JBS does have more than one facility, they can probably consolidate and just focus on those until they can get back to full production," Mr Dalgleish said.

Despite last week warning that major processors might close in response to the restrictions, the Australian Meat Industry Council would not comment on the impact the closure would have on the industry or whether other processors were planning shut downs.

And the restrictions on processors have effectively tightened further.

It had been understood that the one-third reduction in production applied to peak volumes but premier Daniel Andrews since said it was based on "their operations last month, or based on their staff numbers over a three-month continuous period at some other time in the year".

Processing volumes have been down this year and Mr Dalgleish said it meant the restrictions would bite hard if they carried into spring.

"I'm just talking roughly but you'd probably be talking going down by 60-odd per cent rather than 33pc, I think," he said.

Lamb processing had an even more pronounced spring flush than cattle, which would make lamb prices most vulnerable if the restrictions continued into October, Mr Dalgleish said.

He still expected Australian livestock markets to avoid the 20pc crash in prices experienced in the United States unless interstate abattoirs were no longer able to make up for the lost Victorian capacity.

"It's not ideal but people can probably can hold onto cattle for a bit longer," he said.

"You can with lambs, too, but once they cut their teeth and turn into hoggets, you've got a price impact straight away and, if you can't turn them off, they'll end up becoming mutton.

"So there will be impacts felt to the producer level if that was the case, which is what we're all trying to avoid."