PANIC BUYING: Well-known Melbourne butcher, Peter Bouchier, says panic buying of meat has been "horrendous," and there's no need for it.

Restrictions on operating hours at Victoria's abattoirs have led to panic-buying of meat.

Victoria's abattoirs and meat processing plants will have to scale back to two-thirds of production, under stringent new state government coronavirus regulations.

Woolworths reported a surge in demand for meat, over the weekend, which had an impact on stock availability.

A spokesman said the supermarket introduced product limits on Sunday and had ramped up production.

The spokesman said the flow of stock into Melbourne stores had been good, over the past 24 hours.

"We're working through the implications of the Victorian Government's announcements with our key suppliers," the spokesman said.

"We're confident we'll be able to maintain a good supply of fresh meat for our Victorian customers.

"We'll monitor the impact closely as the new restrictions come into effect later this week."

Meatworks to operate at reduced capacity in Warrnambool: 340 jobs to go

Woolworth's key abattoir providers are based in regional Victoria, while the company's main meat production partner in Melbourne operated a state-of-the-art facility, with automated technology.

A Coles spokesman said increased demand in recent days had reduced availability for some meat products, in its Victorian stores.

"We are proactively working with our meat suppliers to ensure we can provide a broad range of products for all customers, and stock continues to be delivered daily to all of our stores," the spokesman said.

"To help us manage demand, we have also implemented a temporary two-pack limit on purchases of chicken breast, chicken thighs and mince in our Victorian and NSW border stores.

"We will continue to monitor stock levels and we thank customers for purchasing only what they need." 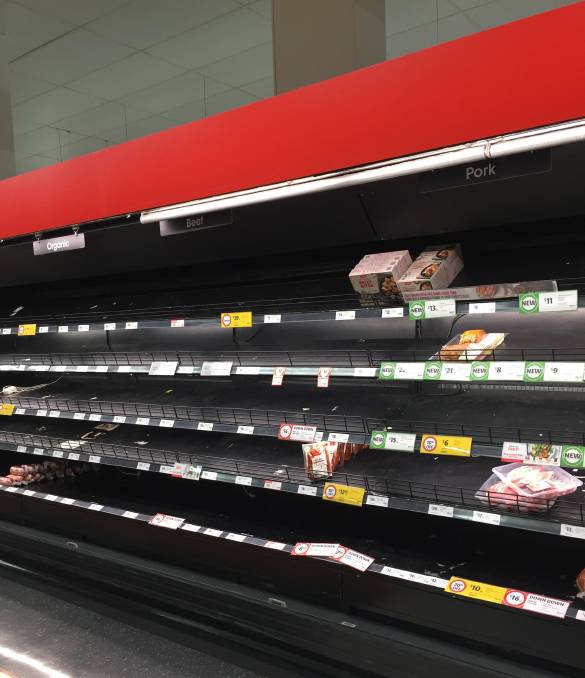 Peter Bouchier, who has butchers shops in Toorak, the city and Malvern, said panic buying of meat had been "terrible.

"The panic buying has been horrendous," Mr Bouchier said.

"On Saturday, Sunday and into Monday it's been out of control.

"It's a shame really, because if they would all take a chill pill and a deep breath, then everyone would be alright."

Some customers had spent between $500 and $600, fearing meat would be in short supply.

"It puts pressure on the staff, wears everyone out and brings out the worst, in some people," he said.

Mr Bouchier said it appeared customers didn't seem to understand the meat needed to be processed.

'You don't just rip it out of a box and put it on display - we are not dealing with a lump of four by two."

He said the first stage of restrictions, in April, saw panic buying eventually peter out and he was hopeful the same would happen, this time.

Mr Bouchier said he had few concerns about supply, as he had long-term contacts in the processing sector.

But he said he hoped the major processors would continue to supply smaller butcher's shops, and not just the supermarkets.

"Over the next few days, if panic buying keeps going, you will notice a bit of a slow up, but meat is not going to run out."

He said some lines may not be available, and oven-ready meals might become scarce, due to the added demand for fresh meat.

"A lot of time goes into value-added lines - when you have 20 people looking at you, waiting to be served, you can't spend 20 minutes cutting up the capsicum."

Online sales had rocketed and Mr Bouchier said he'd only opened up his site for 50 minutes, on Monday, due to the demand.

Gary Hardwick, Hardwick's Kyneton, said while the regulations would make things difficult, they came at a time when production was at a low ebb.

Average weekly cattle slaughter for Victoria is running 5% below the 5 year avg trend this season. NSW and QLD are running at even lower levels. There is some spare processing capacity in the northern states to cover the Covid reduction in Vic. pic.twitter.com/dXCuC4Rl6f

"There is a scarcity of aged sheep, so the production of those lines is very low, at the moment," Mr Hardwick said.

"It will increase after shearing, but we won't get a big supply until mid-September - if that's the case, we are hoping we can handle those lambs and bobby calves."

Mr Hardwick said cattle supplies were also tight, but so was demand, as a result of hotel and food services shutdowns.

"That's reduced the demand for beef," he said.

Hardwicks, and other processors, would continue to operate at saleyards.

"All processors who make the decision to keep processing, under these conditions, need livestock," Mr Hardwick said.