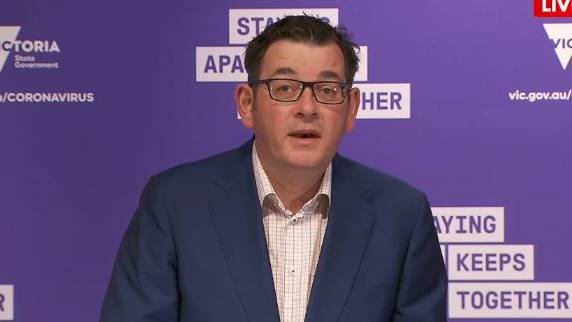 Victoria's abattoirs and meat processing plants will have to scale back to two-thirds of production, under stringent new state government coronavirus regulations.

On Sunday, the government declared a state of disaster, imposing stage four restrictions for Melbourne and stage three for the rest of Victoria.

Officials on Monday announced Victoria had recorded 429 new cases of coronavirus since Sunday, with the total now sitting at 11,937.

Meatworkers will have to wear full personal protective equipment, including gloves, gowns, masks and shields.

Employees will also have to work split shifts and not be allowed to travel to different sites.

"We know that meatworks are a really significant challenge for us, whether it be lamb, poultry, or beef," Mr Andrews said.

"They will move to two-thirds production, reducing their production by one third."

There are about 56 livestock and poultry abattoirs in Victoria.

Agribusinesses and our food supply will continue under Stage 4. We'll work with meat processors statewide between now and Friday night to introduce further measures to reduce the risk of COVID-19 as much as we can.

Australian Meat Industry Council chief executive Patrick Hutchinson said the organisation had been lobbying tirelessly on its member's behalf to ensure they remained an essential service in the supply of food.

"The impact of these restrictions in Victoria, AMIC believes, will lead to a 30 percent reduction in supply chain throughput overall, based on discussions with our membership," Mr Hutchinson said.

"It is our opinion that this will lead to a reduction in saleable meat in the Victorian community."

"There will be some of the most stringent safety protocols that have ever been put in place, in any industrial setting," he said.

"Those workers will essentially be dressed as if they were a health worker."

Mr Andrews said staff would be working at one site only, and be temperature checked and tested.

"It is a proportionate response, to the risk that industry poses."

But given their critical role in keeping Victoria, and the nation fed, it was not possible to go below the two-third production level.

Vic govt cutting meat processing by one third......what will this do to markets? Flow on affects must be that stock will have to be sent interstate for processing. Can absorb the extra numbers. Good thing it's not mid-late spring with huge lamb numbers hitting the market.

Mr Andrews said it was a less busy time for abattoirs, than in spring.

"That would be a very different set of circumstances," he said.

The government had decided to apply the stringent restrictions to all Victoria abattoirs.

"There will be COVID-Safe plans for all industries, particularly those that are at higher risk," Mr Andrews said.

"You can't have a situation where such a high risk environment is operating under two different sets of rules, in two different parts of the state, that will only contribute to further outbreaks," he said.

"It would only mean we were moving the problem from where it currently is into communities where it has not been."

Cedar Meats has been given the all clear to reopen, after closing when a staff member tested positive.

A spokeswoman said all staff were tested for COVID-19 between July 31 and August 2.

The results showed there was no transmission of COVID at Cedar Meats.

Thomas Elder Markets analyst Matt Dalgleish said a one-third reduction in production would be of a similar magnitude to the fall to that in the US, in April, although the impact there was more widespread.

"US cattle sector dropped production by about that amount in April and resulted in a 20 per cent fall in finished cattle prices and a 100pc rise in beef cut out prices at the wholesale level," Mr Dalgleish said.

"But I don't think it will be extreme as that for Victoria, in terms of price impact, as there are still abattoirs operating in other states that can pick up the slack.

There was also some capacity, in the system.

For cattle in Victoria, the slaughter number peak, over the last five years, had been around 34,000 head per week.

2020 has already been a tight one for lamb & sheep processing before the application of the Covid handbrake. Vic sheep slaughter is 23% below the 5 yr avg trend already. The big concern is to have the processors up and running before the Vic spring flush of lambs later this year. pic.twitter.com/atNfaqUlnc

He said he felt the government's actions were neccessary, to get on top of the spread of coronavirus.

"At least it's during winter," he said.

And the Australasian Meat Industries Employees Union has confirmed JBS was shipping cattle, to its Longford plant, Tasmania, for processing.

JBS is also moving Victorian cattle to Scone, NSW, and SA for processing.

He said the Longford plant was now operating five days a week, although the company had planned to cut back to four days, in mid-August.

"The workers are also going through an extreme amount of overtime, at the moment.

"We are lucky we have that 200 kilometres of water, it's kept us coronavirus safe."

JBS and the Australian Meat Industry Council have been contacted for further comment.