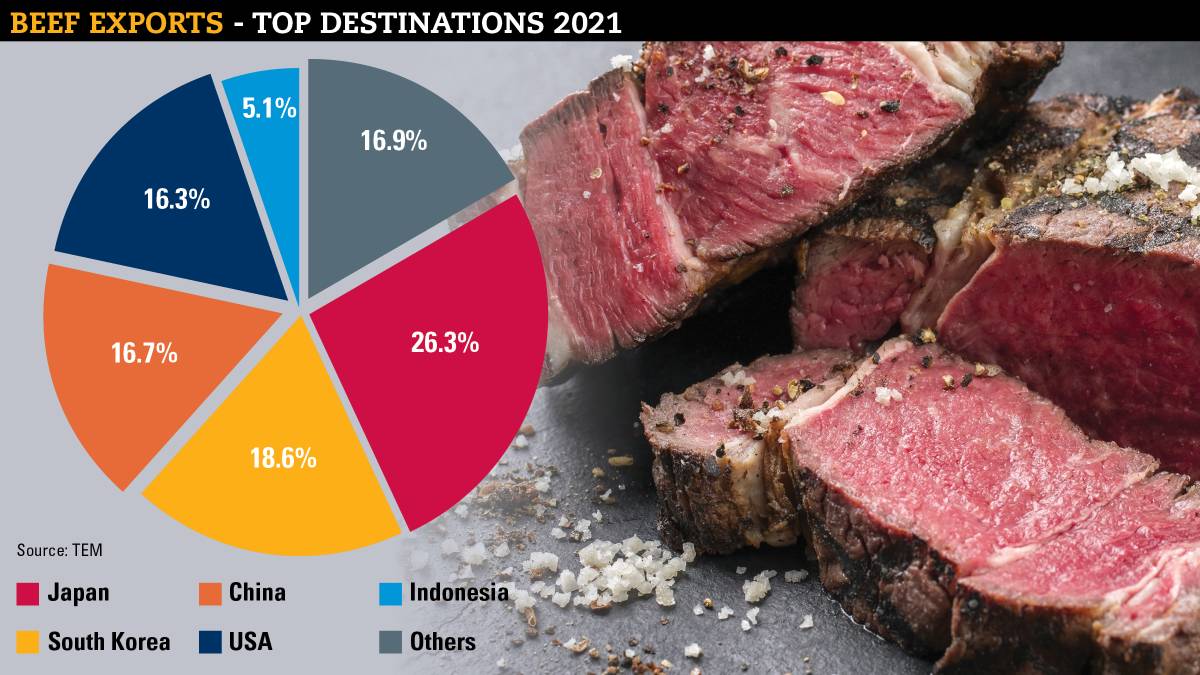 AUSTRALIAN beef's supremacy in food service channels appears to have been a key factor in keeping exports ticking over during some of the toughest pandemic times last year.

The just-released December red meat export figures from the Department of Agriculture, Water and Environment show beef shipments did lift slightly in the last month to see the annual total for last year sit at 887,679 tonnes shipping weight.

That was down on the 1,039,411 tonnes exported in 2020 and close to 20 per cent under the five-year average. However, against a backdrop of heavily reduced cattle supply at home and ongoing COVID disruptions, it was above what most were forecasting during the year.

ALSO SEE:Who will speak for the grass-fed cattle producer?

One of the world's strongest economies, Japan, retained its crown as top customer.

Thomas Elders Markets calculated volumes to Japan at 26.3 per cent of the trade flows, up from 25.9pc in 2020.

Meat & Livestock Australia surveys conducted in Japan last year showed that while COVID-19 had impacted many aspects of people's lives, consumption patterns across protein groups had not altered.

Increasing consumer interest in health, variety and enjoyment of food in Japan would continue to create growth opportunities for Australian beef, despite a shrinking population, the snapshot concluded.

In South Korea, which TEM analysts labelled the 'big improver' in 2021 following its move from fourth to second top destination after accounting for 18.6pc of the annual export trade, the food service factor is similar.

The Korean food service sector is a key user of Australian beef, from manufacturing product in hamburger chains and chuck roll, brisket and skirts in soups in casual eateries to loin in high-end restaurants.

China finished the year as Australia's third largest customer and solid opportunity for growth remains, although analysts and exporters point out competition in China's beef market is intensifying as more countries are granted market access.

"Exceptionally strong Chinese protein demand in 2019 and 2020, due to their pork shortfall from African swine fever, likely overstates the decline in demand seen in 2021," Mr Dalgsleish said.

Considering the ongoing trade tensions and the Australian beef export abattoirs that are still suspended, that shows resilience, according to Mr Dalgleish.

MLA is forecasting national per capita beef consumption in China to increase from 5.2 kilograms in 2015 to 7.7kg in 2025.

This would be on the back of rising incomes, continued urbanisation and the ASF-induced pork shortage.

The majority of Australian beef is sold in food service channels, with a proportion going into further processing of items for the sector such as hot pot rolls, burgers, meatballs and sausages, MLA's market snapshot on China said.

For all the big news in beef, sign up below to receive our Red Meat newsletter.