THE consistency of prices stunned onlookers at the Euroa Angus weaner steer today where prices hit a high of $2620. 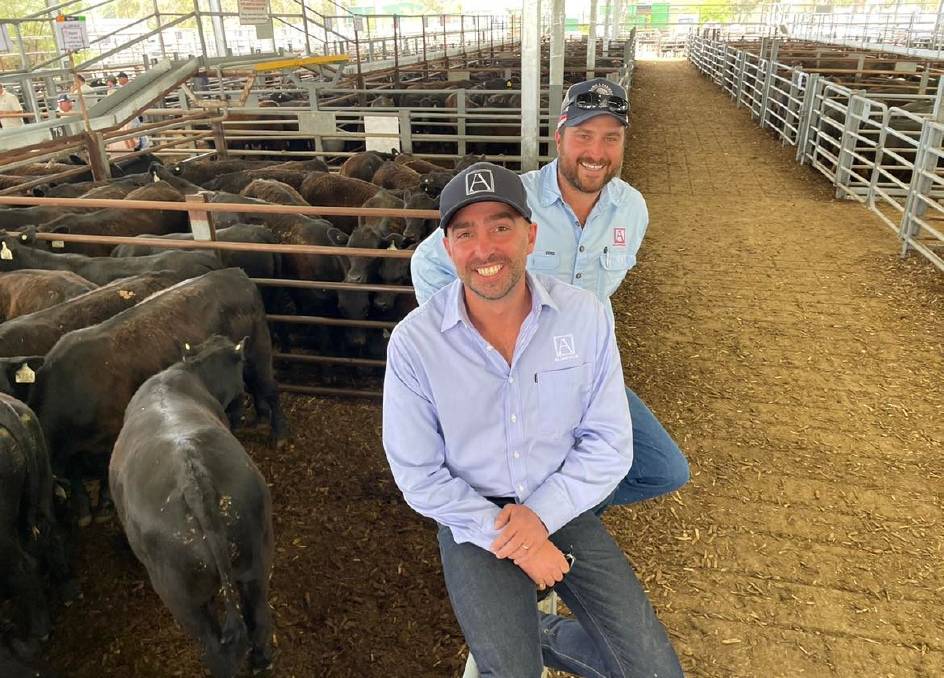 THE consistency of prices stunned vendors at the Euroa Angus weaner steer today where prices hit a high of $2620.

Nearly 100 pens were sold under the hammer before prices dipped below $2300/head, with vendors commentating on the marginal difference between first and third drafts of cattle.

"There were a few restockers who entered in the middle lanes, 310-350kg, and then sales were dominated by the north once we got to the lighter calves," Mr Fischer said.

The opening yard of the sale was offered by Marg King, Wellwood, for steers which averaged 427 kilograms, that hit $2600, or 608 cents a kilogram.

The sale's top price honour of $2620 was knocked down to vendor Wirrani, Creightons Creek, for 19 March/April drop calves, 403kg, that equated to 650c/kg.

"Most vendors would be licking their lips to get their calves in as soon as possible," Mr Fischer said.

"Once it dries up in the north, I can't see why it wouldn't continue at these rates.

"I don't think anyone wants it to get dearer but if it maintains this momentum I think most people would be happy."

Mr McGeehan said it was astounding the evenness of prices from the opening pens to the third lane of cattle, where prices stabilised at $2350-$2450/hd.

"These prices are unbelievable - everyone needs to be happy," he said.

"All the ducks have lined - prices, season, water - so we are enjoying it while we can."

John and Mary Kelly, Kellybrook at Moglonemby, were enjoying the flush prices after "punting" on cattle 18 months ago that have paid dividends.

The Kellys sold 30 steers, at 329kg, to $2430, or 738c/kg, out of an opportunistic buy of pregnancy tested in calf cows last autumn, which had since returned two calves on their investment, and were about to re-enter the market at Euroa's female sale next week.

In 1974, the Kellys sold cattle at the Newmarket Salyards in Melbourne for $30 a head, because "you couldn't give them away".

Another market crash in 2006-2007 meant the Kellys had to euthanise their top heifers which were artificially inseminated in calf to leading genetics.

"So it feels like these prices now are a bit of payback after those hards times," he said.

There was a $330 difference between the heaviest steers (306kg) and the lightest weaners (241kg) of the 143 steers Allanvale, Avenel, offered for sale.

"It has been a good year so we have a great even line of steers, which makes it easy to sell," Mr Lawson said.

"Today's result complements exciting things happening at Allenvale, which we will share in the new year."

Andrew Hansen, farm manager Paul Geeson and Lloyd Bett sold 150 steers to a top weight of 364kg, which sold to $2450, for an overall draft average of 742c/kg.

Mr Hansen attributed the consistency of the steers, which averaged 330kg, to a "harsh" selection criteria, with the Hansen herd based on Merridale and artificial insemination to American bloodlines.

Albury commission buyer Duncan Brown said he was fielding calls from northern NSW restockers who were anticipating acquisitions once the region had dried after relentless rain last month.

He had clients with bullocks bound for processing last week who were unable to get the trucks onto the properties for receival.

"A lot of NSW is still to wet to get in anywhere," he said.

"Because of their weights and because of the prices, they will be destined to bullocks," Mr Askew said.

"With this sort of money, unless the call of the feedlot price comes up a fair bit there wouldn't be enough in it.

"But where that top is, I don't think anyone knows."

Also on the buying side of the gallery were Dev and Thaya Carman, Wyreema, Berringama, who were restocking after preparing to offload bullocks next week. They had sold a mob of steers at 870c/kg dressed, bound for slaughter next week, and traded a feedlot-bound mod of steers at 620c/kg this week. Today, the Carman's replenished their herd with 94 head of Angus steers, av 330kg, to $2400.

They said they were "Still coming to terms with the prices".

"But if you don't buy cattle then you don't have cattle so you just have to meet the market," Mrs Carman said.