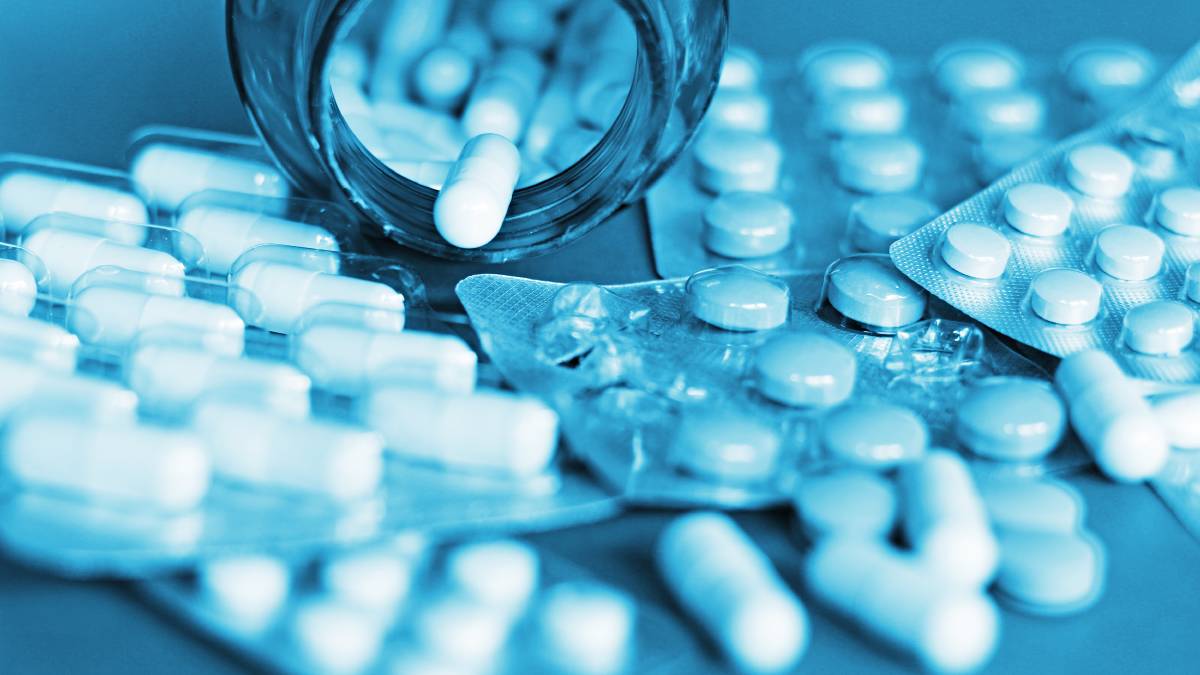 The available data on Ivermectin is a dogs breakfast.

Unlike the huge amount of high-quality data we have gathered on vaccines (5.6 billion doses and counting), the available data on Ivermectin is a dog's breakfast - despite the fact that millions of people around the world have used it to treat COVID, especially in poor countries.

The hope that Ivermectin could vanquish COVID was seeded from Kylie Wagstaff's lab at Melbourne's Monash University. Knowing that the drug had anti-viral effects, they decided to test it against COVID using infected monkey cells growing in a dish. In April 2020 they published a paper describing how, 48 hours after dosing the monkey cells with Ivermectin at a concentration over 10 times that used to treat parasites, virtually no virus was detectable.

There was almost nothing around to treat COVID patients in April 2020. Given the horrific rising death toll in South America and India, and that Ivermectin was already widely used as a medication to treat diseases caused by parasitic worms like river blindness or scabies, the WHO kept an open mind, as they did for other cheap off-label drugs like dexamethasone and hydroxychloroquine.

But the WHO made it clear that Ivermectin should only be used in the context of a trial - drugs can make things better or worse. Indeed, thanks to trials, we now know that dexamethasone helps COVID patients; hydroxychloroquine makes them worse.

But in places reeling from the pandemic, particularly across South America, there was a massive uptake in the use of Ivermectin, sometimes officially sanctioned by local or national authorities as in Peru, Bolivia, Brazil, some states of India (Uttar Pradesh), Bangladesh and Zimbabwe.

June 2020 alone saw Brazilians purchase 12 million packets of Ivermectin - a year's worth of the drug in a single month. It didn't seem to affect the death rate. One Brazilian scientist observed, "the shape of COVID curves did not exhibit any modification when comparing groups of treated and untreated people from the same area". 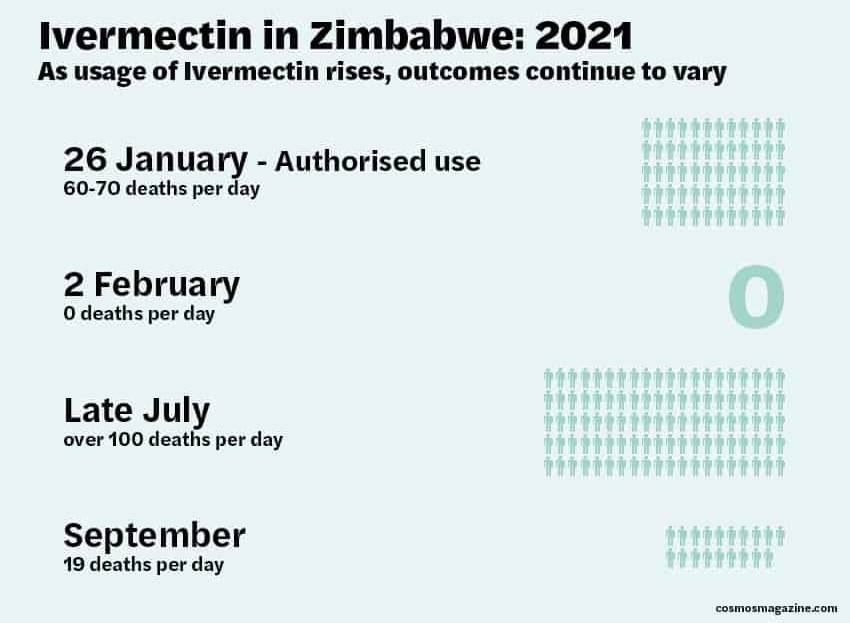 On the other hand, Zimbabwean doctor Jackie Stone trumpeted the success of Ivermectin, because after its use was authorised in Zimbabwe on 26 January 2021, death rates fell from 60-70 per day to zero by 2 February 2021.

That sort of correlation is intriguing. But it's famously fallible - the "correlation is not causation" conundrum. You can show that drownings increase after ice cream consumption but it's not because a belly full of ice cream cramps your muscles. It's because both events are more common in summer. Statisticians refer to summer, the sneaky third wheel, as a confounding variable.

The fact is COVID death rates fluctuate and researchers have yet to figure out why. Zimbabwe was back up to over 100 deaths per day in late July, and then down to 19 per day in September. As Gideon Meyerowitz-Katz, an epidemiologist from the University of Wollongong, put it: "Merely correlating news reports of Ivermectin use with later declines in mortality as if those two things are realistically connected; it's not science in any meaningful sense."

Meyerowitz-Katz's blog on Ivermectin is a great source of information. So is this August article from Liam Mannix in the Sydney Morning Herald.

With so many people taking Ivermectin in some countries, it became hard to do placebo-controlled clinical trials.

Those that were done were often small - just dozens of people - and "observational", meaning the doctor prescribed the drug to the patients and watched to see how they fared. If a drug has a large beneficial or adverse effect, observational studies should pick it up. But observational studies do poorly with small effects and can't accurately measure their size. Without a concurrent matched control group who are not taking the drug, you can't zero out the turning of that hidden third wheel.

Most of the observational studies aimed to see if Ivermectin could be used to treat patients at home and prevent them from progressing to severe disease. Some showed benefit in terms of lowering viral loads and quicker recovery times. Others did not. One of the few statistically significant placebo-controlled studies from Colombia showed no effect of Ivermectin.

A few of the studies weren't just compromised by being flawed: they were possibly fraudulent. Taking advantage of the desperation for answers, some researchers sought to make a name for themselves in the dodgy world of online pre-prints. These are papers that have yet to clear the hurdle of peer review and their findings should be treated with caution. In the case of Ivermectin, two pre-prints that showed a significant protective effect of Ivermectin were later retracted; one from the Chicago-based data company Surgisphere and another from researchers at Benha University, in Egypt.

To try to read an overall signal from the many small studies, researchers have collected them in what is known as a 'meta-analysis'. But it all depends on which studies they picked. Some meta-analyses showed a net positive effect (particularly if they used the retracted Egyptian data). Others found no conclusive effects.

The most reliable of these meta-analyses was a 28 July Cochrane review. This international organisation specialises in adjudicating medical controversies by deploying independent statisticians and medical experts to sift out and analyse credible published studies. Their review concluded: "We are uncertain whether Ivermectin reduces or increases mortality compared to no treatment."

It's easy to understand the desperation of people turning to Ivermectin in 2020. In 2021, it's harder to fathom why people in the US and Australia - who have easy access to vaccines - would opt to bet their health and their life on it. Merck, the company that manufactures Ivermectin, is certainly not pushing its use for COVID.

A recent alert from the US CDC noted a 24-fold increase in Ivermectin prescriptions from pre-pandemic levels, as well as cases of people using veterinary products. It noted: "Overdoses of Ivermectin are linked with low blood pressure, confusion, hallucinations, seizures, coma and even death."

The FDA took to Twitter to convey the dangers: "You are not a horse. You are not a cow. Seriously, y'all. Stop it." It warned that "taking large doses of this drug is dangerous and can cause serious harm". Australia has followed suit, with prescriptions up 3-4 fold leading the TGA to take the extraordinary step of banning its off-label use for fear of depriving people who need to use Ivermectin to treat parasites.

One of my vaccine-hesitant friends who is keen on Ivermectin pointed me to the trials being done by Sydney doctor Thomas Borody. Borody has treated around 25 COVID-positive patients in home quarantine, some as young as 16. He says most recovered without being hospitalised, though one died. Yet we know 90% of people do recover without being hospitalised. These do not strike me as good statistics upon which to be making life-and-death decisions. Nor is Borody claiming that Ivermectin is an alternative to vaccines. It is, he says, "another string to the bow".

To find out how well that string plays, we'll need to wait for the results of large placebo-controlled clinical trials currently underway.

These include the Oxford trial known as PRINCIPLE, another at McMaster University in Canada called TOGETHER and one at the US National Institutes of Health known as Activ-6.

These trials focus on repurposed drugs like Ivermectin that are cheap and readily available. A key goal is to find the ones that will stop home-based patients from progressing to severe disease.

So far there are two: the inhaled steroid budesonide and (surprisingly) the anti-depressant fluvoxamine.

PRINCIPLE has shown budesonide shortens recovery time by three days in some patients. And preliminary results from the TOGETHER trial showed that fluvoxamine was mildly effective, reducing the relative risk of getting worse by 30%.

In August the TOGETHER trial showed Ivermectin had no statistically significant effect.

The other trials have yet to report - but don't hold your breath.

Oxford is loathe to predict when they will have their results, but after badgering head investigator Christopher Butler, he guessed it might be in the first quarter of next year. The NIH apparently won't have anything to say till 2023.

That seems absurd, given the epidemic of people taking the drug in the hope it will work.

Carlos Chaccour, an infectious disease specialist at the Barcelona Institute for Global Health who works on Ivermectin for malaria control and has tested it in a small trial for COVID, helped clarify the situation for me. "The evidence so far doesn't point to a large effect, if any at all. To detect a small effect you need a much larger sample size - hence it will take a long time."

The story What we know about Ivermectin first appeared on The Canberra Times.