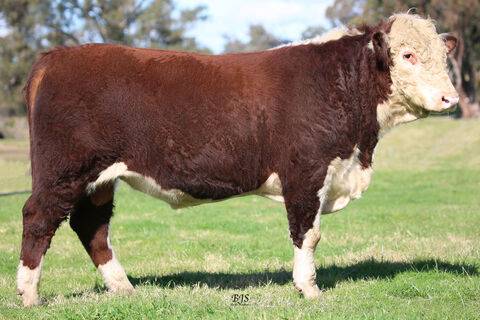 A young bull, judged to be Hereford Australia's youngest Super Sire, has sold for $14,000 at the online Gippsland Performance Bull sale.

Warringa stud principal Bill Kee said he only had a small herd.

"As a result, I have well and truly got the genetics he bears in my herd," Mr Kee said.

"I thought he could go out and provide some genetic potential to another herd."

His retail beef yield was +0.3 per cent and his intramuscular fat was 1.7pc.

"He is a very sound, young bull, with a lot of potential," he said.

The bull was judged as a super sire in June, this year, based on his estimated breeding values.

"I am very happy with that

"He's not 18 months old and has achieved that and now he's got the opportunity to go out and express his potential."

Mr Commins said he inspected the bull, before bidding on it, when he took a load of cattle for sale.

"He is homozygous poll, was close to home, has good skin, good eyes and is a good type of a bull," he said.

"His figures match, they are unbelievably good."

Rumpole would be used over stud heifers, next year.

"I might give him a run in the out-of-season cows, this year."

He said it was the third bull he had bought from Warrringa.

"There hasn't been a Hereford sale in east Gippsland for a while, so I thought it was a very strong result," Mr Godbolt said.

Many prospective buyers were able to see the bulls, before bidding.

He said some bulls also went to the Yea district, with others being sold to mountain cattle producers.

The sale was run by Elders and Nutrien on AuctionsPlus.