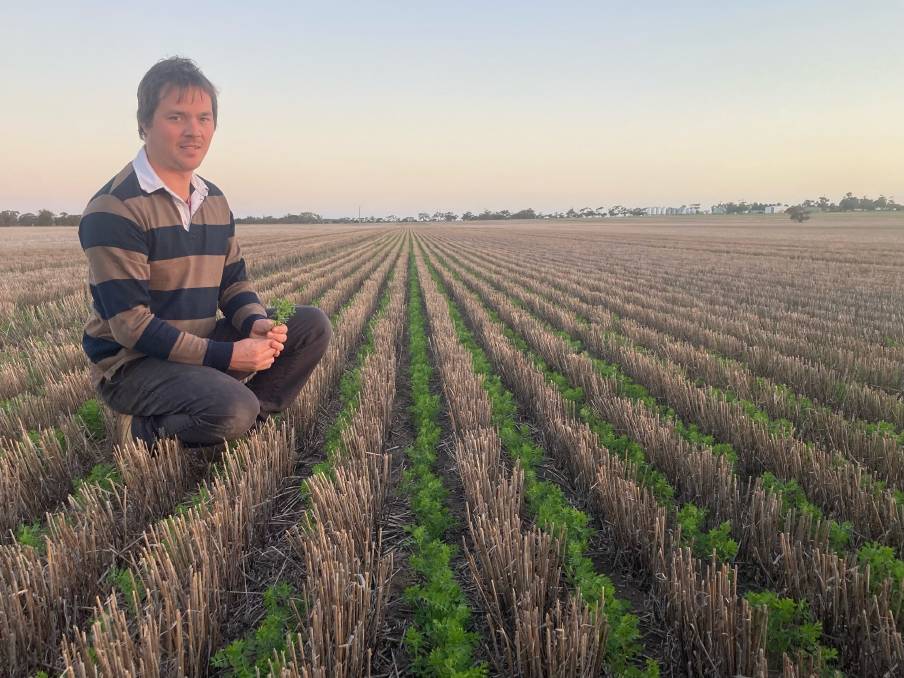 Lentils looking great, after slow start to the season.

Promising markets, a turnaround in the season and drought in the northern hemisphere have been a big plus for Victoria's pulse growers.

Despite a "tough start," after a very poor autumn, good rains in June and July have seen prospects for the lentil crop improve.

A crippling drought in Canada, Australia's biggest competitor, and Indian tariff reductions are adding to the potential for positive prices for those growing the popular pulse.

Matt Rohde, Lorquon, has sown 15-20 per cent of his farm to lentils and says they are "looking great," after good rainfall in June and July.

"We have been chipping away at 2020/21 lentil sales since harvest, and see the combination of a tariff reduction coupled with greater demand from overseas a positive sign for the coming harvest," Mr Rohde said.

"Our concern this season will be our own production quantity, with risks still on the table such as frost and spring rainfall."

The farm had 61 millimetres of rain for July.

"Most things are tracking well, although late, so we pray the rain continues into spring," Mr Rohde said.

The Indian government has reduced the tariff on Australian lentils from 33 per cent to 11pc, effective immediately.

"Severe to exceptional drought is being felt in large tracts of Alberta, Manitoba and Saskatchewan."

Saskatchewan produced more than half the country's lentils, but the yield loss in that state has been estimated at 90pc.

"With Australia's main competitor for lentil market share into India, suffering in the midst of a heat wave that's quickly knocking off yield potential in its lentil crops, Australian farmers are confident they will be able to make good sales into the subcontinent this year."

"We are actually sitting on the same rainfall as we were last year, and that's off an incredibly dry start," Dr Brand said.

Prices had been predicted to be higher than the long term average, with bigger areas sown to lentils this year, than last.

"I think a lot of people are pretty happy with the way their crop is looking - as a general rule, the crops are looking pretty good, for the start we had."

"There is certainly a lot of potential sitting in the paddock, at the moment," Mr Hosking said.

Before the tariff announcement, there had already been a steady rise in lentil prices.

"This further tariff reduction in India will only mean demand will increase, so prices have to adjust upwards," he said.

"There is something going wrong with our supply chain, if they don't."

He said the cost of shipping containers and port congestion would have an impact.

"The tariff removal and dry conditions in Canada will more than compensate for the freight price," Mr Hosking said.

"But it's having an impact - every time we increase costs along our supply chain that reduces the return in the growers pocket.

"When everything slows down, cost go up."

Anthony Bibby, Berriwillock, has 1500 hectares under lentils, as well as field peas and cereals.

"If the frosts stay away we will be in for an average, or slightly above average year," Mr Bibby said.

"At the moment its a long way behind - they have a lot of catching up to do, but the rain that's sweeping through every week is keeping the ground nice and moist.

"If the prices are good, you will see quite a few growers quitting lentils at harvest time."

Gene Fuller, Yaapeet, said his crop was about six weeks behind, after a dry start, and was a little more downbeat.

"We are going to need a lot of luck for our lentil production to come off this year, and get reasonable yields.

"I have got lentils I haven't sold yet.

"Lentils are as good a gross margin on the farm, as anything, mainly because of the price."

Ryan Milgate, Minyip, said it was a "pretty positive time to be a lentil grower in the Wimmera".

The only downside was the dramatic increase in freight rates, which took the 'high' off prices.

"It's about a positive as the lentil job has looked for a while on the international side of things," Mr Milgate said.

He has about 600 hectares of lentils in the ground, with some in storage from last year.

"Coming into next year, if things stay positive, may see a few more popped in next year, at the expense of barley."