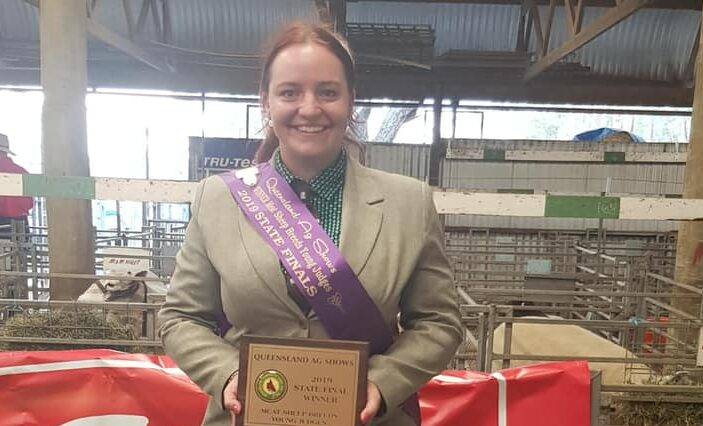 The next generation of meat sheep judges will vie for top honours in next month's national competition, to be held at the Royal Queensland Show.

The next generation of meat sheep judges will vie for top honours in next month's national competition, to be held at the Royal Queensland Show.

Agricultural Shows of Australia has announced the finalists in the prestigious competition, which will features the best young meat sheep judges aged from 15 to 25.

For Queensland finalist Georgia Lee, 25, it won't be her first time competing on the national stage, having previously competed in the national finals twice.

Originally from Brisbane, Ms Lee became involved with competing at shows through her school agriculture program.

"It's a good way to get kids involved in agricultural shows," she said.

Ms Lee, who qualified before she turned 25, is now looking to put her best foot forward before she ages out of the competition.

"My fingers and toes are crossed but I've had a look at some of the other finalists and I think it's going to be quite a tough competition."

Now based in Pittsworth, Ms Lee works as an assistant in nursing in aged care and is studying a Bachelor of Paramedicine.

Ms Lee said she plans to balance her chosen career with continuing to assist at shows as a steward.

"It gives me an opportunity to pass on some of my knowledge to more young people," she said.

"It's an extremely prestigious event and positions at the nationals are keenly contested," Dr Wilson explains.

"These young people are the future of agricultural show competitions which are crucial to the continual improvement of Australia's food and fibre. The national competition is a coveted opportunity to grow personally and professionally by practising skills against the cream of the crop."

Queensland Ag Shows president Kerri Robertson said in a meat sheep judging competition, it is important for the assessor to relate the form of the animal to its function.

"Livestock producers, breeders, feeders and buyers all judge and evaluate livestock for their potential as either breeding or market animals," she said.

"The task of judging is a subjective one, based on selected production systems and changing market conditions. It is important that entrants are able to use their skills and articulate their approach."