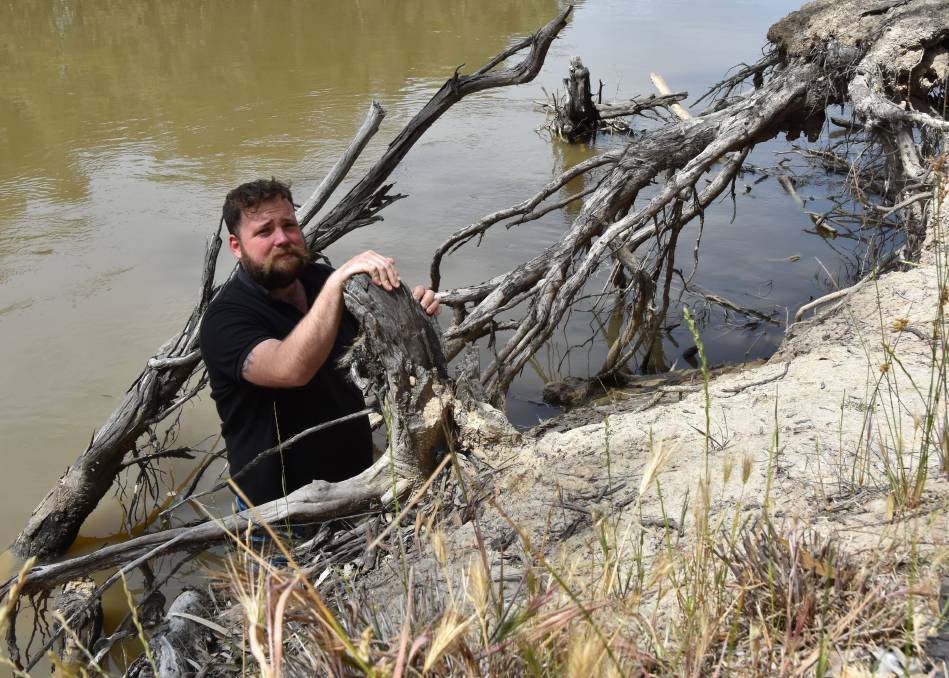 RIVER CONCERNS: Speak Up deputy chair Lloyd Polkinghorne demonstrates erosion along the Murray River banks. He says it's frustrating the Nationals only appeared to be speaking about the failings of the Basin Plan once a federal election is on the horizon.

The federal National Party's failed attempts to change the Murray-Darling Basin Plan have been applauded by long-term opponents of the project, who say it puts it back in the spotlight.

But others have reacted with scepticism, questioning why it's taken so long for the party to raise the matter in parliament.

On Thursday, the Nationals attempted to move a set of amendments in the House of Representatives after they had failed to get up in the Senate the night before.

The amendment sought to remove the 450-gigalitre water recovery target, legislate the promise of no more water buybacks, enable new offset projects and ensure no more water is taken when the plan concludes in 2024.

Nicholls Nationals MP Damian Drum told parliament another 450GL of water was effectively ruled out in late 2018 because of a new socio-economic neutrality test.

"It effectively said that the new socio-economic neutrality test could not take more water out of agriculture for the environment if it was going to have a negative and detrimental effect on the communities," Mr Drum said.

"That was agreed to by all states, so what we're doing here is simply legislating that."

He said the recovery of water had been the worst policy of any government.

"So we're going to put a line through buybacks, simply because buybacks are most destructive, dangerous and damaging," he said.

The Nationals today introduced amendments to the Water Act and Basin Plan Act. The next major step required to protect the environment is delivering environmental complementary measure projects rather than destroying rural communities by taking more water. #regionsmatterpic.twitter.com/vEm1w9wDOZ

Carpendeit dairy farmer Robert Campbell said he had moved from Cohuna due to issues over water two years ago.

"We are not dairying up there, at the moment, because we didn't have enough water," Mr Campbell said.

"It was too expensive."

Senators that continue to push for basin plan on time and in full lose all their credibility. Obviously they have no provision for critical thinking as 80GL/day will never be delivered through a choke at 7.5GL max. About time the senators from the MDB region stood up an acted.

He said delivering the 450GL was not achievable.

"They physically can't get it down the river, they can't get down what they are sending now," Mr Campbell said.

"If you go to Barham, the waterfront there is eroding at a rate of knots and trees are falling into the Murray River, left right and centre.

"Cobram is the same - the Murray is not meant to be run flat out, 365 days a year, it's not a European River."

Mr Campbell said irrigators had been "onto" the Nationals for years.

"We have been in Drummie's ear, and he has finally acted," he said.

The Victorian Farmers Federation has long advocated for the scrapping of the 450GL.

Water Council chair Andrew Leahy, said the Nationals had done what they said they would do "for once.

"At least they are going to try," Mr Leahy said.

"Barnaby's back in, so you never know - we have put it to them, and they have done it.

"We know where everyone stands now."

Mr Leahy said any water for the 450GL would have to come from the consumptive pool.

Jan Beer, Upper Goulburn River Catchment Association, said it put the issue back where people would be talking about it.

"With McCormack we never heard a word about it," Ms Beer said.

"It's like they are sticking their head in the sand, they won't acknowledge the 450GL can't be recovered, or delivered."

She said politicians didn't want to face the reality it couldn't, and wouldn't, happen.

Buybacks would mean many people in the Goulburn Murray Irrigation District would sell water, because they had to.

"And there goes the GMID, it will collapse.

"I think its still political, as soon as its mentioned about dropping it, SA absolutely go on the attack."

Speak Up deputy chair Lloyd Polkinghorne said it was frustrating the Nationals only appeared to be speaking about the failings of the Basin Plan once a federal election was on the horizon.

"They haven't been terribly effective in their ability to affect change," Mr Polkinghorne said.

"I find it very frustrating when we get bogged down with parties, when it's up to the individuals, within those parties, to act with integrity for everyone to have a healthy, viable Basin.

"We have had significant problems for at least 10 years.

"I don't know effective they will be, they are making lots of noise at the moment, but they have always protected their relationship with the Liberal Party."

He said rural people were becoming very tired of the political games being played with their livelihoods.

"We hope there is more substance to it, and that it's not simply a stunt," Mr Polkinghorne said.

"As it stands, we don't know what the Federal Government's position is on the Basin," Mr Wynne said.

"Our position is clear - we have long said we don't support buy backs and there should be more flexibility with the offset projects."

"We're the only State actually delivering water towards the Plan's extra 450 gigalitres, but we only approve projects that save water and won't cost jobs or take water from our communities."