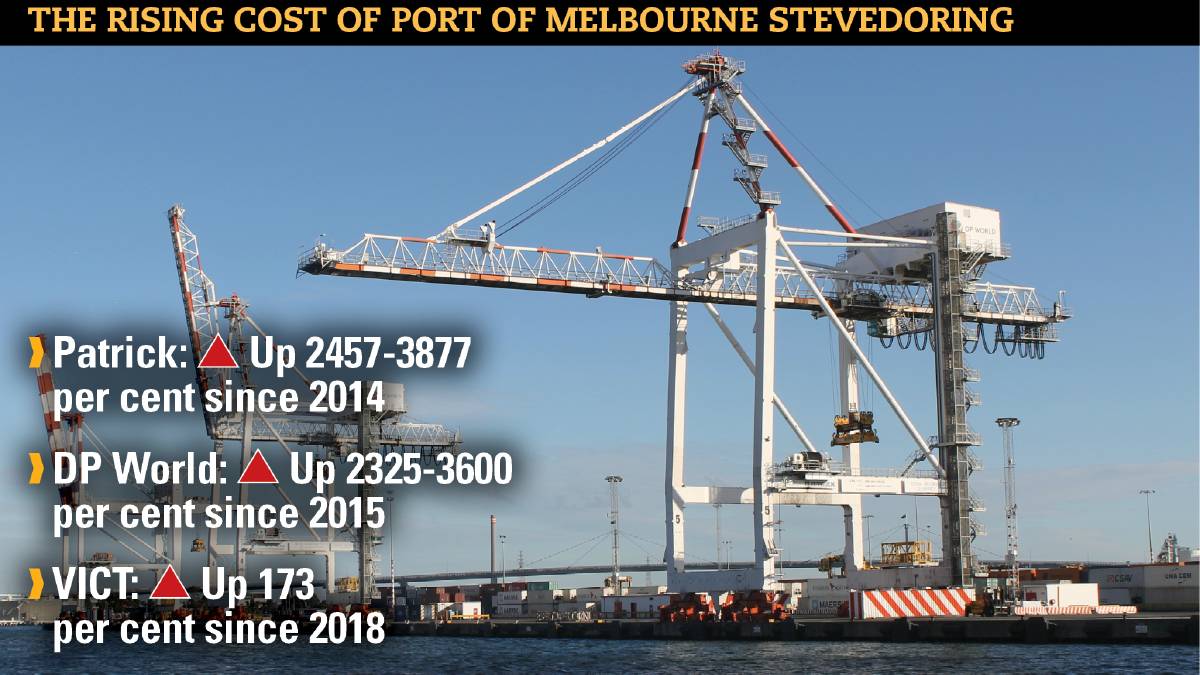 STEVEDORING COSTS: There's growing alarm among exporters, processors and farmers about the rising cost of loading containers onto ships at the Port of Melbourne.

In April, peak body the Freight Trade Alliance and the Australian Peak Shippers Association raised questions about the rising cost of terminal access charges (TACs) with the Productivity Commission.

"These rapidly increasing costs are having a particularly devastating impacts on exporters and importers, with downstream crippling financial impacts on manufacturers, farmers and regional communities."

Mr Zalai said the extra cost could be adding up to $28 a tonne to grain exports.

"For a lot of the grain products we are talking about, the profit margin sits somewhere between $10 and $60 a tonne," Mr Zalai said.

The FTA/APSA provides trade and logistics advocacy for cotton, wool, dairy and meat exporters, as well as the Tasmanian Logistics Committee.

"A transport operator has no option - it's a ransom model, where they have to pay this fee to get access to the port," Mr Zalai said.

"We understand stevedores have costs and need to be profitable, our argument all along is they should passing any cost to their commercial client, the shipping line."

TACs are applied to trucks and trains for dropping off or picking up a laden container at the terminal.

Stevedores also charge additional fees for truck and train booking times (to collect or deliver containers) as well as associated penalties and charges associated with the landside interface.

DP World charges an electronic administration fee of $28.45 and $38 for manual entry.

VICT has also announced it will increase its infrastructure surcharge to $141.80 from July 1.

Container Transport Alliance Australia director Neil Chambers said the stevedores had realised they couldn't recover the revenue they needed from the shipping lines.

"So they have turned their attention to the landside, which is unregulated," Mr Chambers said.

"Therein lies the rub - they could put these fees up 1000 per cent tomorrow and there is no regulatory impediment to doing so."

He said the Australian Competition and Consumer Commission was clearly concerned the use of TACs meant stevedores were earning a growing proportion of their revenues from customers with limited ability to respond.

"We have said to both state and federal governments this is a matter for regulation," Mr Chapman said.

The ACCC said stevedores claimed the price increases were due to:

"There is no competition, because of Part X of the Corporations Act allows shipping lines to cartel and manipulate the market," Mr Anderson said.

"They may not be particularly picking on Melbourne, or Victoria, but when they come to Australia they are able to divide the work up amongst themselves.

"The shipping lines are are continually screwing down the stevedores to get the lowest price."

"We continue to closely monitor the impacts of this protocol on landside charges and are working with stevedores and other stakeholders to achieve pricing transparency through a voluntary model.

"Should this voluntary model not achieve an improvement in pricing transparency regulation may be considered."

PoM stevedores have been contacted by Stock & Land for comment.