BOOM TIMES: Canola is riding the crest of a wave at present.

A complicated set of fundamental factors have come together to surge canola prices to their highest levels on record.

CANOLA prices have continued to soar over the past week, with spot prices on the benchmark French MATIF exchange rising an incredible $55 a tonne overnight last week and Australian old crop values poking through the $700/t mark.

A number of factors had contributed to the rise, which is also presenting Australian growers with the opportunity to lock in high new crop values should they have the risk appetite.

"There has been a lot of extra crushing capacity installed in Canada in recent years," Mr Whitelaw said.

It has led to a rare situation where Canada was required to import Ukrainian canola to meet domestic demand.

"It could be likened to what happened in Australia where Manildra imported wheat during the drought, it is something that very rarely happens," Mr Whitelaw said.

The lack of supply, combined with ongoing concerns about the upcoming crop in the world's key production zones of Canada and the European Union has contributed to the massive rise in values during the first third of 2021. 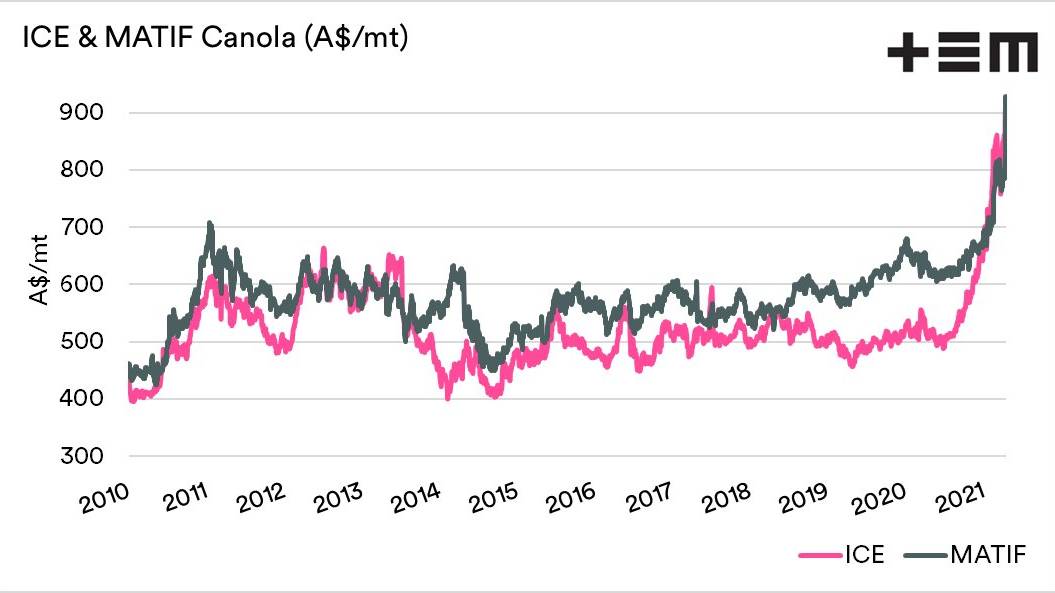 There has been a massive spike in both Canadian (ICE) and French (MATIF) canola prices. Source: Thomas Elder Markets.

Mr Whitelaw said there were a range of other factors also keeping prices bubbling along.

"There is uncertainty about Chinese demand, which remains very strong for both soybeans and canola, while more broadly there has also been a big rally in grain markets over the past week, all of the factors are playing a role in keeping prices high," he said.

Nick Goddard, Australia Oilseeds Federation executive officer, said it had led to a positive feeling throughout the Australian industry.

"It's a fantastic time for the industry and people are buoyant," he said.

"While we don't expect these type of values to remain throughout the season there is the expectation we'll still be looking at good prices as we get closer to harvest, especially if the current issues in the northern hemisphere persist."

He said that the strong demand from the European Union for canola for biodiesel, combined with declining production in that region, which has been attributed to pesticide bans, including effective neo-nicotinoid insecticides, contributed to the unprecedented demand for Australian canola.

Andrew Suverijn, Nuseed national sales manager and customer lead, said feedback was that growers that had planted into moisture, particularly in WA, were comfortable in locking in at least a small proportion of their expected production at current values.

"It's a great number and they're willing to lock a small parcel in."

Mr Goddard said the economics of canola production changed markedly with prices at these levels.

"Where growers may have once thought it was risky to grow canola if they needed 1.2 tonnes a hectare to break even, based on the former benchmark price of $400/t, now they probably only need 0.6-0.7t/ha so that changes the thinking."

He said the concerns regarding weather extended into the wheat market, with moisture stressed US hard red winter wheat crops suffering cold conditions, followed by an unseasonably hot spell, both which have potential to damage yields.

He also said Russia has hit its export quota for wheat quicker than expected, which had also been supportive of prices.