While livestock thefts dropped slightly in 2020, police say they remain a concern 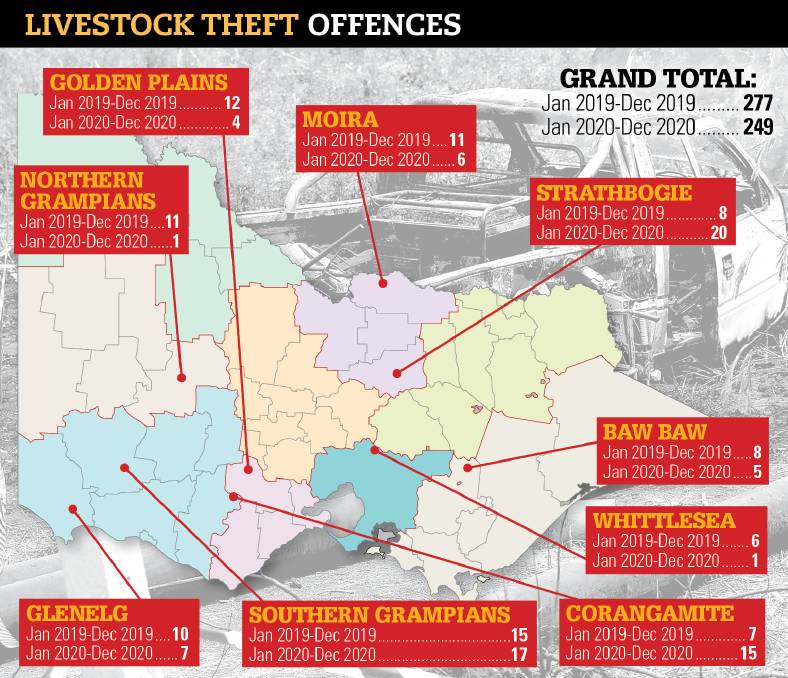 Reported livestock thefts decreased slightly in 2020 compared to the year before, but police say farmers need to remain vigilant.

Data from the Crime Statistics Agency revealed that over the last five calendar years, 2016 had the lowest number of stock stolen, with a total of 160 thefts or burglary offences.

Livestock theft decreased slightly in 2020, down to 249 offences.

Strathbogie saw a significant jump in the number of offences where livestock were stolen, with 20 reported cases last year.

The Southern Grampians also saw an increase, with 17 offences last year compared to 15 the year before.

Victoria Police farm crime liaison officer Senior Sergeant Jason Hullick said the drop last year could be related to the pandemic lockdowns and the fact that people were at home more.

He said while stock prices could be a motivation for people, most thefts were opportunistic.

"People who are motivated to steal livestock will look at properties, they'll keep an eye on cattle movements," he said.

"Certainly if they identify something that's close to a set of yards or in set of yards... they'll wait for an opportunity to do it."

He said producers should try and avoid keeping small lots of livestock near yards and also try to secure their yards where possible.

"We find that smaller lots tend to go missing more than larger, because it's easier for them to move, they don't need large trucks to do it.

"Cattle that are easy to get to a set of yards, or stock yards that are easily accessible or not secure tend to be an easier target for thieves as well."

Senior Sergeant Hullick said fewer cattle had brands nowadays and ear tags could be removed, making it hard to track stock once they had been stolen.

"We really rely on the public and the farmers to keep an eye out for their stock and machinery, and each other," he said.

"If they see something suspicious with stock movement, please report it.

"It certainly helps us with intelligence to track down stolen stock if we see that there's movements of stock that are unusual."

Buyers should also be aware, he said.

"If they buy stock and they have multiple holes in their ears, that can be a sign as well that stock has changed hands a number of times," he said.