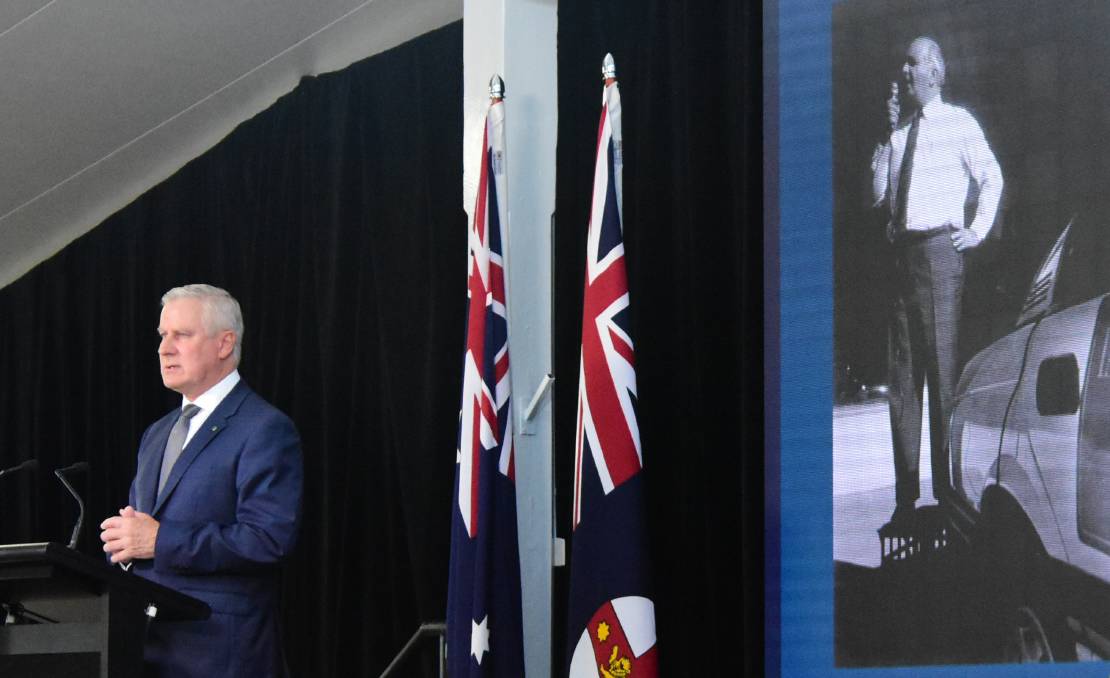 With whips, saddles and bales of hay proudly on display, it was a fitting farewell for "warrior of the bush", Ian Armstrong AM OBE, in Cowra on Monday morning.

In a tribute, Ian's son Angus spoke about his family life, including his work on the farm and his love of the regional and rural areas.

"He was a man of his word, he was as good as his handshake, a true gentleman, a good bloke, a warrior for the bush," he said.

"Dad was a hardworking, caring man who took and sought out opportunities and improvements for his family and community."

Mr Armstrong also recited a poem, Bridge to the Bush, which honours his late father's achievements both in parliament and in the bush.

"After a dry run in the seat of Hume, in Lachlan his campaign resumed with strong success. He set out to Macquarie Street for his next chapter for better rights for country folk - he would settle for no less," one segment of the poem said.

"His life has been an incredible journey for the once boundary rider and wool classer. He has travelled to every continent, met Presidents, Princes and Prime Ministers, and left them more the wiser.

"For 28 years he travelled from farm to city along a winding road with wind, rain, fog and the odd kangaroo nearly landing. Looking back, he realised that in every trip he was building a shared understanding."

Mr McCormack highlighted Mr Armstrong's political achievements, including his integral role as agriculture minister in relocating the Department of Agriculture to Orange in 1992, the largest decentralisation project undertaken by a government.

"Today we pay tribute to a a great man of the regions, we give thanks for a wonderful life of achievement," he said.

"Ian's work has touched so many of us in so many different ways. I always sought and very much valued Ian's advice.

"Ian Armstrong has left a profound legacy right across agriculture... he was leading the way, he was a man of the people, no issue was too big or too small.

"Today we honour our one and only Member for Lachlan."

Mr McCormack also paid tribute to Mr Armstrong's family, noting the sacrifices made by his wife Jenny and their children during his time in office.

"We say thank you to Ian's wonderful support base, to Jenny and family, we share in your loss but importantly we acknowledge your integral part of Ian's delivery to the people of NSW and beyond." he said.

Tributes were also made by Paul Toole MP, Melinda Pavey MP and family recollections were made by Mr Armstrong's grandchildren.