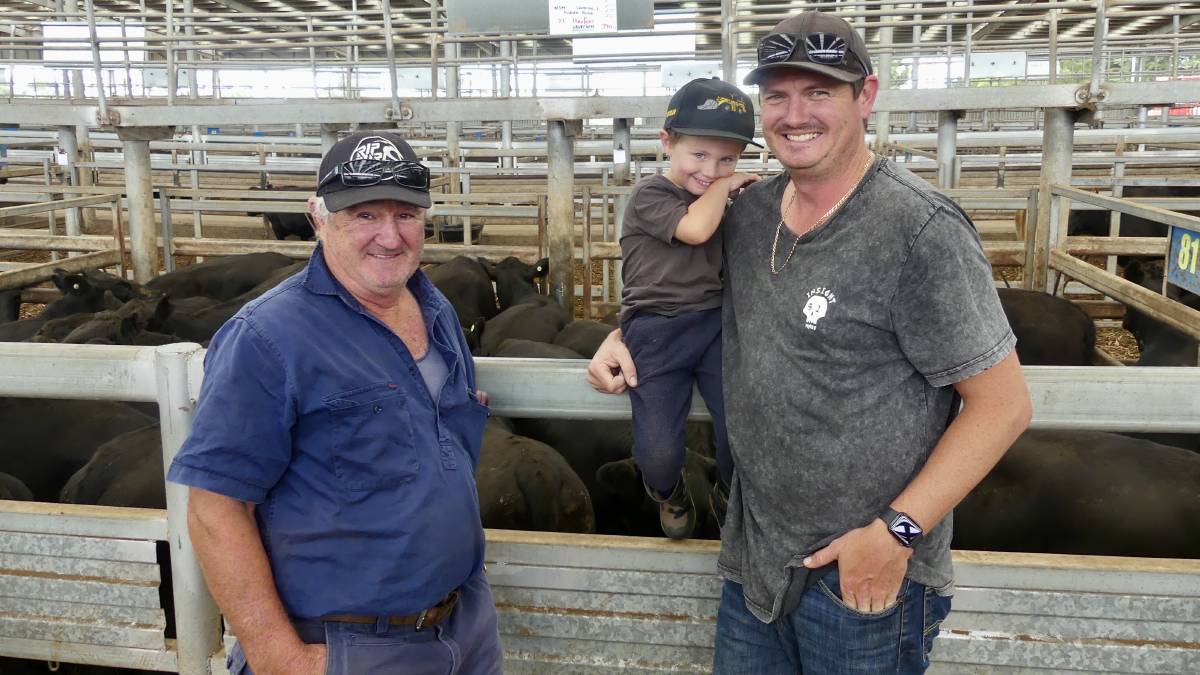 Gavin Phillips, Boolarra, with Bentley and Jed Alexander. Mr Phillips sold 10 cows and calves for $2860 at the Leongatha store sale on Friday.

Supply of cattle has been maintained and so have prices, but agents say there are plenty of potential buyers who are leasing their properties or taking agistment cattle to avoid paying a premium at the saleyards.

The Eastern Young Cattle Indicator closed at 866.25 cents a kilogram on Tuesday.

It was an overnight drop of 4.63c/kg and less than 2c/kg lower than four weeks ago.

"It is fluctuating a little bit but it's still consistent on where it has been over the last couple of months," he said.

"Like usual it's the quality - if you buy the good quality cattle you've got something to sell at the other end, even if it does drop back a bit.

He said this time of year was traditionally the selling period for producers and supply had been maintained at the fortnightly Leongatha store sales.

"We keep saying, 'where are these numbers coming from?'

"I think we've had such a good season up to date - if not one of our better seasons - the cattle will come over a lengthy period of time, they won't just hit the market in one hit."

Mr Perczyk said the demand was still there, although some people were dropping off because they were not prepared to pay the high rates.

He said the excellent season in South Gippsland meant there was still green grass in the middle of February.

"If clients don't want to pay the rates, they're hopping off the wheel and going through other alternatives or leasing their property putting agistment cattle on," he said.

If you buy the good quality cattle you've got something to sell at the other end, even if it does drop back a bit. - Dane Perczyk, Alex Scott & Staff Leongatha livestock manager

The market had been fairly steady at the higher prices over the last 12 months but it was difficult to predict what would happen going forward.

"What people have had to pay to get cattle in the last 12 to 18 months, I'd like to see the job continue at similar rates for some of these people to get out of these cattle," he said.

"How long further we see these prices, who knows."

"I think probably the next thing that'll be coming available will be a lot of smaller spring calves because of price," he said.

He said demand had been maintained, although some buyers were hesitant given the high prices.

"They can only be guided by what the participators and the industry are doing, the processors etc," he said.

"They're putting a lot of cattle back on feed, or back penning for feed for later on to give themselves more numbers."