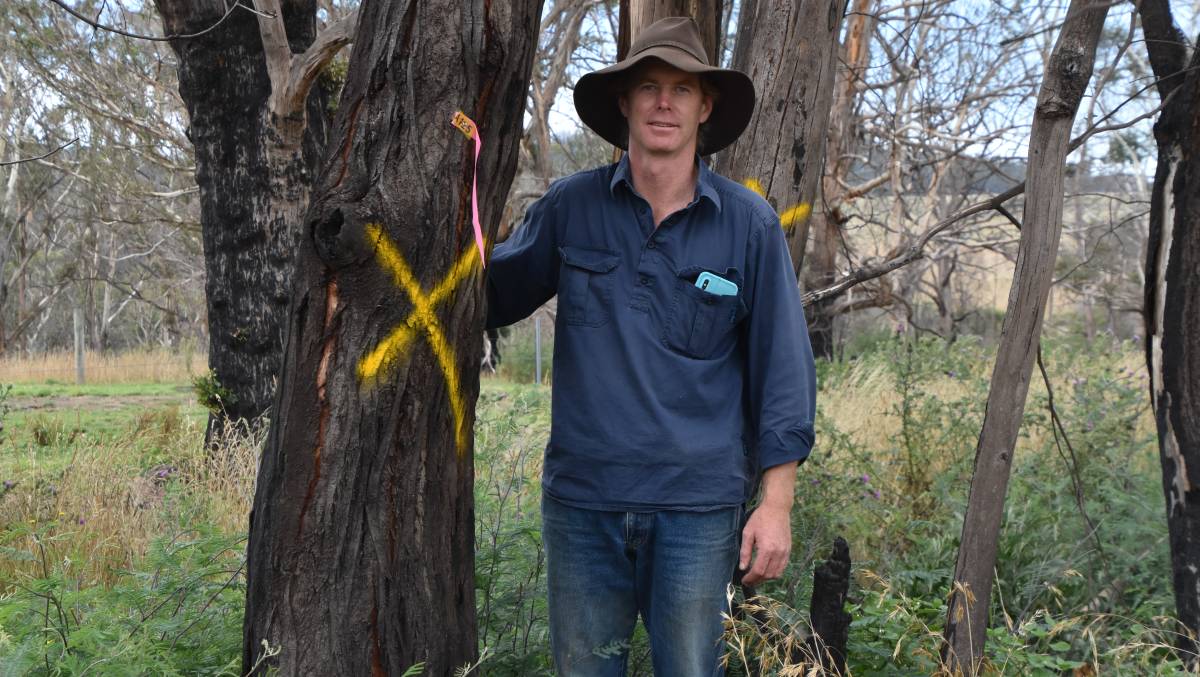 CALL FOR ACTION: Gelantipy primary producer Lynton Hill stands by one of dozens of trees along the roadside which were marked for felling more than a year ago.

Some dead trees are less than a metre from the road.

Dying trees along major Victorian roads in the state's east are posing dangerous safety risks to people in nearby small communities, farmers warn.

Thousands of trees burnt during the 2019-2020 East Gippsland bushfires are yet to be felled, and some primary producers believe a slowdown in the tree removal program could have potentially devastating consequences and block major strategic routes in future emergencies.

Gelantipy cattle breeder Lynton Hill said in some cases, trees - which were earmarked for felling more than a year ago - were less than a metre from the roadside.

"You've got over 100 kilometres of road from Suggan Buggan through Gelantipy and down to the Bruthen-Nowa Nowa Road that really needs a good assessment," Mr Hill said.

"I've got three kids and a wife that go down that road for school and kinder most days and parts of that road - which we refer to as our main artery - are pretty scary.

"The biggest issue is for some reason contractors have stopped clearing those dangerous trees."

On the Princes Highway at Tonghi Creek near Cann River beef farmer Graeme Connley criticised the state government's tree removal program and said it lacked a "strategic and common-sense approach".

"There are places between Orbost and the border which were burnt but haven't been touched or had a tree removed since the fires," Mr Connley said.

"We have trees hanging at 60 degree angles along the roadside on our most major highway east of Melbourne and they are yet to be felled... it's absolutely ludicrous."

Mr Connley, along with a group of residents in East Gippsland, have lobbied the government to clear the highway by a "tree length" or about 80 metres either side of the road to prevent future closures.

The Princes Highway, which links Victoria and NSW, was closed for more than a month at the start of 2020 due to the bushfires, as was sections of the Great Alpine Road which links East Gippsland to the north-east.

"That might sound big to start with but once it's done, it will limit the maintenance on the road and ensure the major arterial that was desperately relied on will never be closed due to a bushfire again," Mr Connley said.

"I told him we had trees which were dead before the fires which were still hanging over the road," Mr Dean said.

"Trees along roads like the Great Alpine Road need to be cut back; it's quite simple.

"It's not that expensive and it means the road will only be closed when the fire goes through, not weeks after for a huge clean up."

He said the upkeep of busy roadsides had been an ongoing issue.

"It has to be maintained and many trees that were felled during or after the fires are now shooting and growing up again and before long they will be hanging over the road," he said.

Government sources say it could take several years for hazardous trees to be felled from some of Victoria's major and remote bushfire-affected roads.

In a statement, the state government said community safety remained its highest priority, but refused to detail how many dead or dangerous trees were yet to be felled in Victoria's east following last summer's fires.

"Over 1300 kilometres of hazardous tree removal is underway across East Gippsland, with over 3000 cubic metres of roadside material already extracted," a Department of Environment, Land, Water and Planning spokesperson said.

"Hazardous tree removal post-fire will continue to be managed for a number of years and is prioritised based on community risk, across a fire footprint area of 1.1 million hectares."

"We saw last summer that these unmaintained roadsides acted as wicks; we had a lot of paddocks that were grazed down to nothing because of the drought but the fire progressed along the roadsides," Mr Bull said.

"If the government can find $50 million in pay rises for the senior bureaucrats, they should be able to find the money to remove these trees because this far more important."