Victorian interest had prices climbing to $410 a head for Merryville Merino stud ewes. 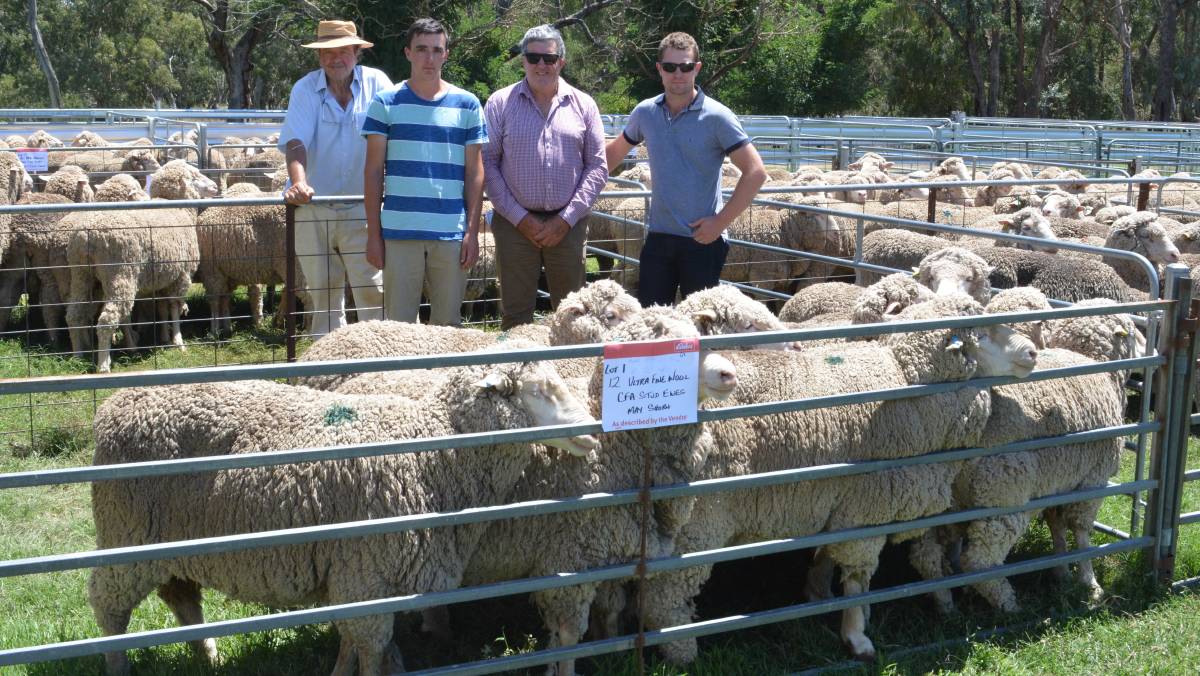 Repeat buyers, the Barty family of Beverley Merinos, Bendigo, Victoria, picked up the top-priced and second top-priced pens that were knocked down for $410/hd and $400/hd.

Drawing interest from phone bidders as well as the Barty family who were in attendance of the sale, the high-selling pen included 15 cast for age (CFA) superfine stud ewes, May/June shorn. Steve Ridley of Elders was the auctioneer for the stud ewe offering where prices hit $410/hd for a pen of 15 CFA superfine wool stud ewes, May/June shorn.

Similarly the $400/hd pen were a choice lot, with keen parties bidding up to secure the only ultrafine offering. The pen consisted of 12 CFA ultrafine stud ewes, May shorn, that measured under 16.5 micron at 21 months.

Looking to pick up a few pens to help build their numbers, buyer John Barty said they believed the lead lots were the best two pens of the day.

They wanted ultrafine ewes and there was only one pen so had to pay that price for them, Mr Barty said.

On Merryville blood for 40 years now, the Bartys run 1000 stud Merino ewes along with 7000 flock ewes. They buy a few pens every few years to boost numbers.

"We bought a Merryville ram at Armidale this year... we are also on Alfoxton blood," he said. The largest volume buyer was Anthony Jude de Silva from Hilltops Free Range, Reynoldsdale, Boorowa, who picked up around 75 per cent of the offering.

Selecting 348 ewes in total for a $301/hd average, Dr de Silva selected all the 1.5 year stud and flock ewes on offer for his integrated grazing system that has free range chickens and sheep running alongside each other.

Dr de Silva recently purchased 417 ewes from Woolaroo that he is joining to Grassy Creek Merino rams. The new Merryville ewes will be joined immediately.

Also operating on the CFA stud ewes was Maisters Swamp Merino stud, Kentucky, who purchased four pens (62 ewes) for a top of $230/hd, twice, and average of $220/hd.

Auctioneers were Steve Ridley from Elders Goulburn for the stud ewes, and Rick Power representing Nutrien for the flock offering.

The story Merryville Merino ewes to $410/hd first appeared on The Land.