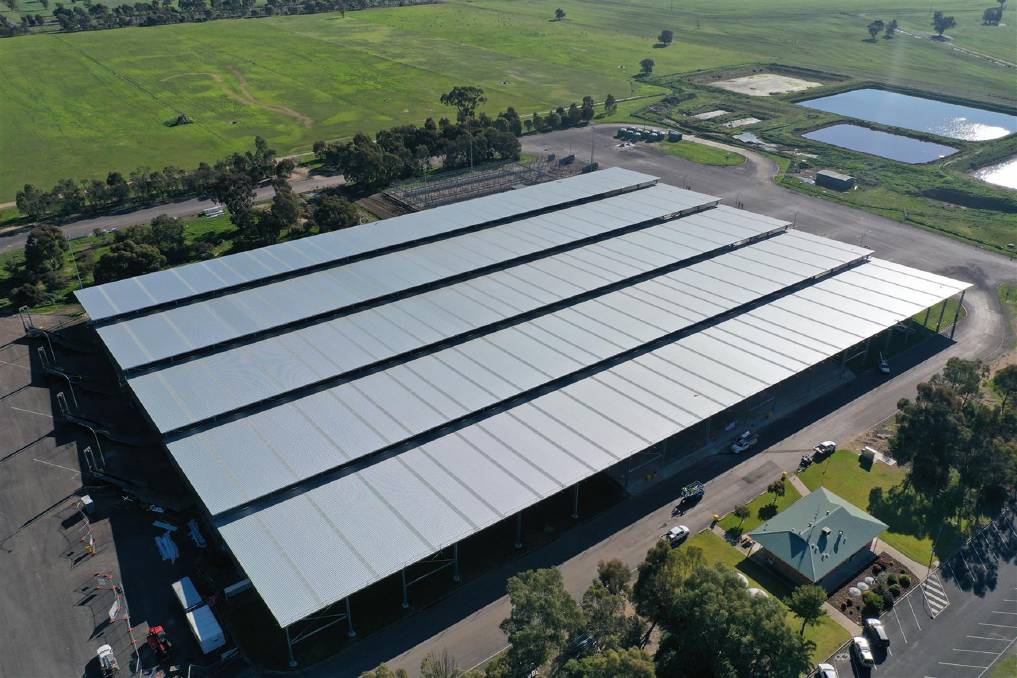 The sheep and lamb pens at the Bendigo Livestock Exchange could be about to join the many other saleyards with a roof.

Last year the Horsham Regional Saleyards was roofed and it was announced that Corowa's yards in NSW would receive funding for a roof and other works.

The Bendigo saleyard operators recently enacted its extreme heat policy when temperatures were forecast to hit 42 degrees for its Monday sale day.

Bendigo Stock Agents Association president Richard Leitch said the heat rules meant the sale started an hour earlier at 8.30am and the yarding was capped at 15,000.

Mr Leitch said the rules worked well with the sale completed and everyone out of the yards by 11am.

The temperature reached 41 degrees at 2.30pm.

He said there were not many sheep remaining at that time and those that were were relaxed.

He said the key on extreme heat days was to get the sheep off concrete as soon as possible.

But he believed Bendigo definitely needed a roof - "not only for animals but people as well".

He believed a lot of stakeholders were in favour of a roof installation.

Mr McCulloch said the rules stated that if a Code Red day was forecast for Monday by 9am on Friday before the sale then the sale would be cancelled.

He said that provided stakeholders with a clear policy that everyone understood and adhered to.

The recent provisions used were outside that policy, but were enacted after consultation and feedback from stakeholders.

"We knew that if we capped the sale then we could get the sale done in one pass and get the sheep into delivery pens on soft flooring and water," he said.

"The stock were handling the conditions perfectly fine."

He said the decisions taken in terms of operation and strategic direction of the saleyards were made in consultation with stakeholders.

The council had commissioned an operational review of the 44,000-square metre facility but it had been delayed by the COVID-19 pandemic.

It was expected to be completed within three months.

It looked at infrastructure, threats and opportunities as well as sale-day procedures.

In the midst of that review a petition was circulating calling for construction of a roof to be fasttracked.

Mr McCulloch said it would be a significant piece of infrastructure and a "fairly significant" cost.

"There isn't a person at the yards that isn't supportive of a roof," he said.

"We just have to see what the review identifies and how we can try to deliver on all the feedback.

"In the next few months as the review is delivered it will give us a really great path forward as to what our priorities are and how we will achieve them.

"I expect a roof to be a significant part of that review."

Mr McCulloch said the net benefit to livestock from having a roof had never been questioned.

He said the facility followed the animal welfare guidelines that covered saleyards and depots.

Australian Livestock Saleyards Association executive officer Mark McDonald said heat policies had been on the association's radar for a number of years.

There was no national or state-based standard in terms of human occupational health and safety for saleyards.

ALSA's policy was that individual saleyard operators should make their own decisions and plans relating to those issues.

"We encourage each yard to have a policy," he said.

She said under the POCTA Act, it was an offence of cruelty for an owner or person in charge of livestock to not provide proper and sufficient shelter and water.

Victoria's animal welfare Codes of Practice made under the Act, as well as the Australian Animal Welfare Standards and Guidelines-Land Transport of Livestock, provided guidance on what was required to manage extreme heat for livestock, including stock at saleyards and during transport.

Ms Holmes said the Code of Welfare of Animals at Saleyards stated that animals should be protected from weather extremes.

Providing shade or cooling systems in holding facilities in hot climates was desirable and watering facilities should be provided in all receival yards, and in any other yards or pens where animals may be held for more than 12 hours.

In October the Corowa saleyards received $9.2 million in NSW government funding for infrastructure upgrades and the installation of new technology.

The plans included a roof over the existing facilities to protect livestock, staff and visitors from extreme weather conditions.

At Horsham its new roof was opened in late 2020.