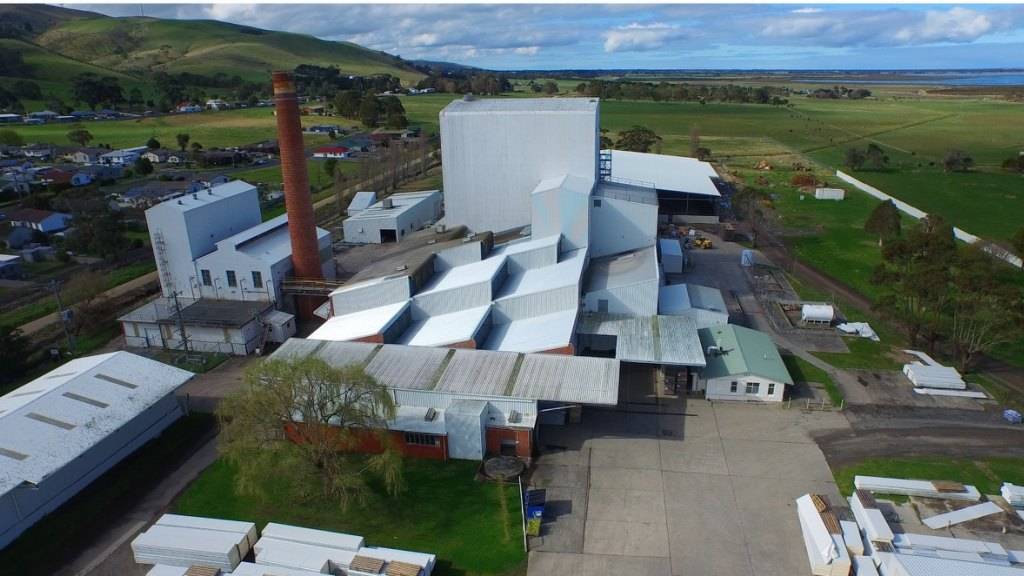 WORKERS STOOD DOWN: The ViPlus Dairy factory at Toora, in South Gippsland.

The company is among some the largest employers in the region.

A regional-based dairy company in Victoria's south has stood down more than 30 workers citing a decline in international trade as the reason for the job losses.

ViPlus Dairy, which employs 124 staff at Toora in South Gippsland, says it will make 31 staff redundant in the coming weeks.

The company employs 124 people at its Toora factory and specialises in manufacturing infant formula and dairy products to mainly international countries.

It comes as the workers' union has taken aim at the federal government, pointing the finger at its ongoing trade tensions with China as a result of the job losses.

ViPlus Dairy chief executive Jon McNaught said international markets had not rebounded as expected following the pandemic, forcing the company to lay off 25 per cent of its Gippsland workforce.

"Making this very hard decision is not taken lightly and we have done all we can and pursued all alternative options before undertaking redundancies," Mr McNaught said.

"Our skilled workforce is central to our success, and we are loosing some excellent people as a result of this action."

According to ViPlus Dairy, about 90 per cent its business is based on exports to 13 countries across the Middle East and Asia.

About a third of the company's operation is based on exporting infant formula products, while two thirds is made up of producing nutritional dairy-based formulas to both the export and domestic markets.

ViPlus Dairy said it had utilised the federal government's JobKeeper Payment "where able", however, it would not comment on whether its decision to lay off staff was based on the scheme's pending expiry at the end of March 2021.

The United Workers Union has taken aim at the federal government claiming it is partially responsible for the demise of ViPlus Dairy's international market.

"ViPlus' main supplier is China and the company has told me they are getting orders cancelled left, right and centre," Mr Harris said.

"We are concerned there could be many more people who could lose their job at ViPlus which may even force closure of the site."

However, Mr McNaught dismissed the union's claim the federal government's trade tensions with China had forced the ViPlus to sack its workers.

"The federal government's actions have not led to this situation," Mr McNaught said.

Very sad news. Hopefully it puts the deafening calls for a step up despite the pandemic, the high AUD, ongoing China trade war and collapse of the daigou market into perspective.

Mr Harris said ViPlus was among the largest employers in South Gippsland and small community of Toora, which has fewer than 700 residents, relied heavily on its existence.

"A majority of these sacked workers are aged in their late 30s and early 40s so it's not as if they are going to walk into new employment easily," Mr Harris said.

"We also want to make it clear that the union has spoken to ViPlus and said there will be issues if people from Melbourne ever replace any of these local Gippsland jobs."

"This decision will be heart-breaking for the families and workers involved and it will have devastating consequences for the region," Mr Dodd said.

"We think ViPlus should have persisted and kept the staff on but we encourage them now to open dialogue with the unions and the Latrobe Valley Authority to see how we can support these people who have lost their jobs."

Mr Dodd said the government-led Latrobe Valley Authority, established to help re-skill displaced workers in the wake of the closure of the Hazelwood Power Station in 2017, along with the GTLC would offer support to the stood-down workers.

"We have assisted people from Hazelwood, and sawmills such as Carter Holt Harvey and Australian Sustainable Hardwoods and we encourage people from ViPlus to contact us," Mr Dodd said.

"Support is available for people who have become recently redundant and includes help to either retrain or peer support so we urge workers to seek that help."

Member for Gippsland South Danny O'Brien said he was disappointed to learn of the the ViPlus Dairy job losses.

"My thoughts are with those who have lost their jobs," Mr O'Brien said.

"ViPlus has been a success story given the Bonlac plant closed 15 or so years ago and that was a blow for the local community then.

"To have over 100 jobs has been fantastic but clearly the loss of any jobs will be felt."

Mr O'Brien said the plant had employed many locals as well as people from across the broader Gippsland region.

"The state government certainly should do what it can to assist whether that's through (Regional Development Victoria) or the LVA and do its best to help the workers that are going most impacted by these redundancies," he said.

ViPlus said it was in discussions with RDV and LVA about possible areas of support for the affected workers.