Three times auctioneers knocked down weaners for the top price. 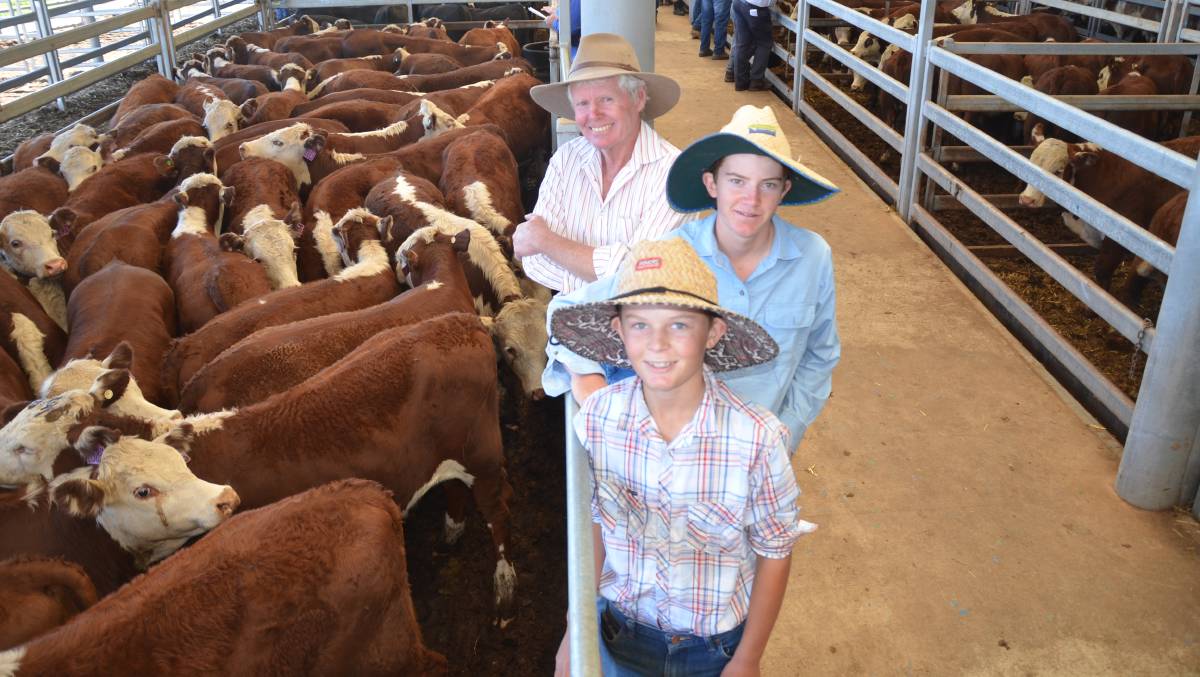 Weaner steers surged to a hefty $1970 a head, thrice, while weaner heifers attracted plenty of spirited competition and topped at $1810 during the Premium Colours Weaner Sale at Northern Victoria Livestock Exchange near Wodonga on Friday.

All up, the sale of 2671 head averaged $1680, but this also included some pens of older yearling type cattle.

BUR agent Michael Unthank, Albury, said the sale was a "ripper result" to end the week of weaner sales at Wodonga.

"If you're complaining about the results this week, you really need to get out of the industry," he said.

He said most heifers sold just as well as the weaner steers from about 450c/kg to 530c/kg.

Top price in the weaner steer pens ($1970) was achieved across three different vendors.

Eight- to 10-month-old, Angus-cross steers from BM and BM Campbell, Hilltop, Koetong, hit the big money first. This pen was yard weaned, grass fed and tipped the scales at 422kg.

The second pen was sold by B and J McFarland, Bethanga. The pen had an average weight of 448kg and was Angus-cross.

The final pen to hit $1970 were Charolais-cross steers from JF and EM Renkin, Lima, which weighed 438kg.

In the weaner heifer section of the market, Charolais-crosses, also from JF and EM Renkin, topped the market at $1810. The pen weighed an average of 413kg and was grassfed.

Unlike earlier in the week at Wodonga, where bids flew fast from the online buyers, the bulk of the winning bids on Friday were from buyers on the rail at the saleyards.

The online competition did help push up the market - particularly on the heifer pens - and according to StockLive, online buyers successfully grabbed 5.2 per cent of the market.

These buyers did, however, bid on 23pc of the sale and without their competition the overall results of the sale may not have been as strong.

The best presented pen of steers enticed buyers to push the bidding to $1380 for that pen of eight- to 10-month-old Hereford steers tipping the scales at an average of 373kg. The pen was sold by Brooklyn Pastoral, Mansfield, and based on the Glendan Park bloodline.

A special prize was also awarded to the best presented pen of Charolais steers. This accolade went to MJ and EE Turner, Huon, for their pen of 31 Charolais-cross steers based on Rangan bloodlines. The steers were 10 to 11 months and weighed an average of 416kg.

Mr Unthank said it was the northern buyers who provided the strength in the market right through the week of weaner sales.

The competition from lot feeders was particularly strong on Friday, he said.

Buyers from North Star, Berrigan, Tamworth, Toowoomba and the local area were successful in their bidding.

The top priced pen of older yearling type steers made $2150 and were sold by CJ and FL Holland, Mansfield.

Fifteen- to 16-month-old heifers, also from CJ and FL Holland, topped the older heifer market at $1895.

The story Weaners sell to $1970 at Wodonga first appeared on The Land.