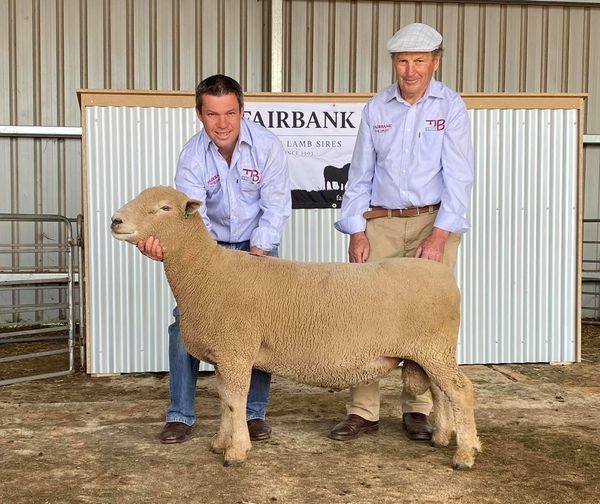 TOP SELLER: The Badcocks, with the top selling Southdown ram.

An Australian auction record for a Southdown ram has been set by Tasmanian stud, Fairbank.

The stud, which runs Poll Dorsets, White Suffolks and Southdowns, sold its top priced ram for $11,000, to Banquet Southdowns, Mortlake.

Fairbank's co-principal Chris Badcock said it was the first time the sale had been interfaced with AuctionsPlus.

"That allowed our mainland buyers to participate in the sale, as well," Mr Badcock said.

"Because of the coronavirus travel restrictions, buyers had not been able to see the sheep, so they have really been relying on our opinions, our videos and analysis," Mr Badcock said.

"That's probably the most humbling part, they are still prepared to back our genetics, even though they actually haven't physically seen the sheep."

Mr Badcock said the sale-topper was from the best of the Southdowns the stud offered.

"He is a very good, well-muscled ram, who is very correct, and his pedigree was different to a lot of the other rams out there," he said.

"He had that combination of a good balance, with an outcross pedigree."

The top-priced ram was a twin, sired by Fairbank 17/831, an unshown animal, retained for his high muscle Average Sheep Breeding Values and unique all Australian pedigree.

"The easy lambing aspect of the Southdowns is very appealing - there is nothing else that can compare to them,' Mr Badcock said.

"People using those rams are finding the progeny is doing just as well as the other breeds, they;ve had in the past.

"Producers are starting to realise they have a fantastic carcase, and come up with a very even, consistent line of lambs that the processors are commenting on."

Banquet's Gordon Branson said he bought the first three Southdown rams in that section of the sale.

"It's very hard with the current situation, when you can't get anywhere to have a look at the rams,' Mr Branson said.

"But Fairbank has been very good with videos and information."

He said he'd bought Fairbank rams before, "and they're working for me.

"I was very excited to support someone that puts a lot of time and effort, into breeding sheep," he said.

"Spending that kind of money is going to be the new norm."

Mr Branson said the sire would be used over stud Southdown and White Suffolk ewes, to breed rams for the Banquet's commercial clients.

"He is so thick and deep bodied - that's where we get our weight, in our sheep," he said.

"The three rams I bought are different types.

"I can use them differently, in the flock, to produce the rams I need."

"The rams and ewes presented exceptionally well, it was a very strong lineup."