Heirloom seeds the basis for a thriving Mansfield market garden. 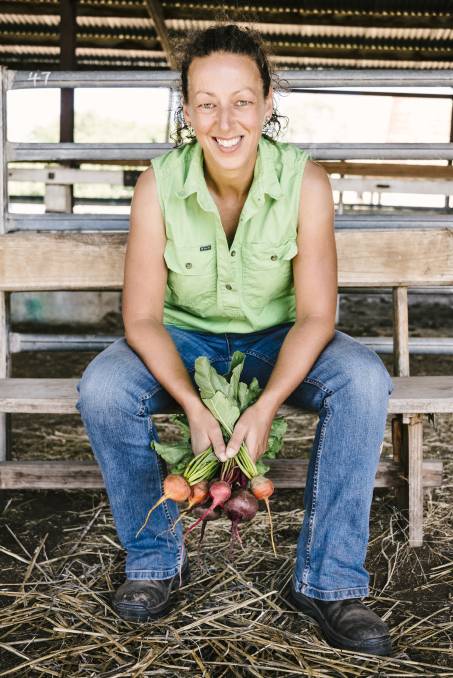 Mansfield's self-confessed "small scale farmer" Simone Boyd is on a mission to show Victorians carrots come in more colours than orange and not every lettuce is green.

Ms Boyd, and husband Cam, grow vegetables on a small property in the north-eastern town, selling at farmers markets, to restaurants and now branching out into online sales through their Heirloom Naturally business.

She says heirloom vegetables are much like precious pieces of jewellery, or furniture, which are passed down from generation to generation, after being saved season after season.

"I don't know why anyone would grow anything different, really, the taste is just divine," Ms Boyd said.

"It got to the point where I was buying limp vegetables, off the shelf, and I thought this is crazy.

"I had a couple of work colleagues, older women, who were into heirloom vegetables and we just got talking, and they said 'give it a go."

At the time she was working as a counsellor, in the mental health area.

"I found that experience of plunging my hands into the soil was almost a spiritual experience, of reconnecting with the earth. It was good for my own wellbeing, not only the nourishing vegetables, but also the connection with the land and the soil."

While she said she had been growing vegetables for 25 years, in 2017 she took the plunge and started a small commercial venture, selling at farmers markets.

"I am very much classified as a small scale we have about 0.2 hectares under cultivation."

But because the vegetables are grown in a "biologically intensive way", Ms Boyd said she can space the plants a lot more closely together.

She said when she,and Cam first looked for a property in Mansfield, their eyes fell on what appeared to be the perfect block.

"My number one, top priority, was to make sure we had decent soil," Ms Boyd said.

"We noticed a vacant block of land, with an actual, functioning windmill, I saw the view, it was a gorgeous day and I didn't even think about the quality of the soil, when we purchased it. I realised it was virtually non-existent, it was shocking topsoil, on a bed of mudstone."

But a herd of Berkshire pigs later, to turn over the pasture, get rid of the weeds and fertilise the soil, and the Boyds were away.

Currently she said she was growing all the "normal" vegetables, such as broad beans, snow peas, early tomatoes, zucchinis and cucumbers.

Currently, she said she was growing all the "normal" vegetables, such as broad beans, snow peas, early tomatoes, zucchinis and cucumbers.

"But there are lots of different varieties, that people have never heard of, and I think part of my role is really to educate people about the fact that not every carrot is orange, not every lettuce is green," she said.

"There's a large variety of shapes and sizes, just as there are humans."

Ms Boyd said she sourced most of her seed from the Diggers Club, but that sometimes presented problems.

"One of the challenges with Diggers is they don't have the amount of seed, I need," she said.

'"There are five or six other seed suppliers that can do bulk seeds.

She said she had also signed up as a grower, with The Lost Seed, which sells old, rare heirloom vegetables and herbs and is part of the Community Seed Bank of Australia.

Ms Boyd said she had previously saved her own seed, with interesting results.

"Diggers sells a Red Iceberg lettuce and I tried growing it here, but the heads are very, very small, so they are really not viable," she said.

"It forms red and green leaves.

"I have saved the seed of that over a numer of yeares and have grown my own heirloom, which I am calling the Mansfield Red Lettuce.

"It's exciting to see when something goes against what its supposed to do, and creates something new, in the process."