After having a wretched run with drought, some NSW farmers have suffered the ultimate blow from Mother Nature, with hail ruining crops. 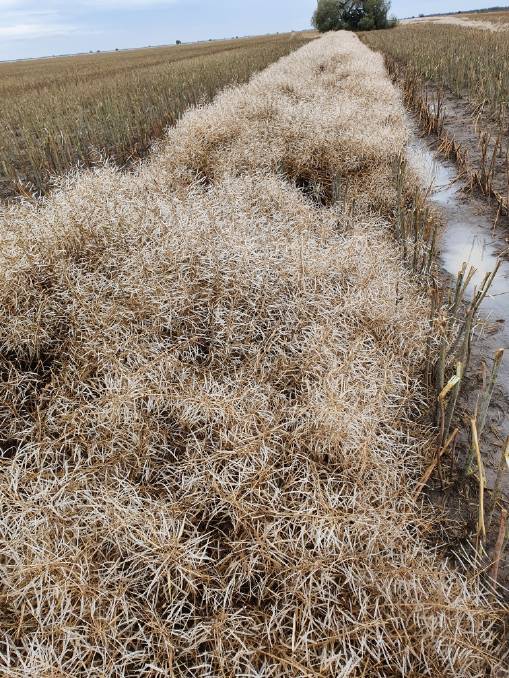 Canola in windrows has been smashed up by hail near Coonamble. Photo: James Nalder.

GROWERS through central NSW are facing a nervous wait to get their first significant harvest in three years off in the face of continued wet and wild conditions.

Farmers in a band to the east of Coonamble had their worst fears about the potential impact of a La Nina on weather over harvest confirmed over the past week with a freak supercell storm sending down hail that has decimated crops.

James Nalder was one of the farmers hit by the hail.

"It fell in a strip about 15 kilometres by six kilometres, we were at home and it came in quiet beforehand and then we got this noise like a jet plane and it just pounded down for around 20 minutes, with hail up to the size of a 20 cent piece, and it's ruined crops in that area," Mr Nalder said.

"There is going to be 100 per cent damage to some crops while insurance assessors will come out and see what the damage is on other ones," he said.

"It is a real kick in the guts after the years of drought to finally have what had been a really good year up to that point taken away from you."

However, Mr Nalder said there was a silver lining in that all the nine growers that he estimated were worst hit by the hail had insurance.

"It is lucky, as we have heard of farmers in other spots that haven't insured for whatever reason, so at least there is some opportunity for income but for the most part the paddocks were insured for less than what we thought we would get in the end." 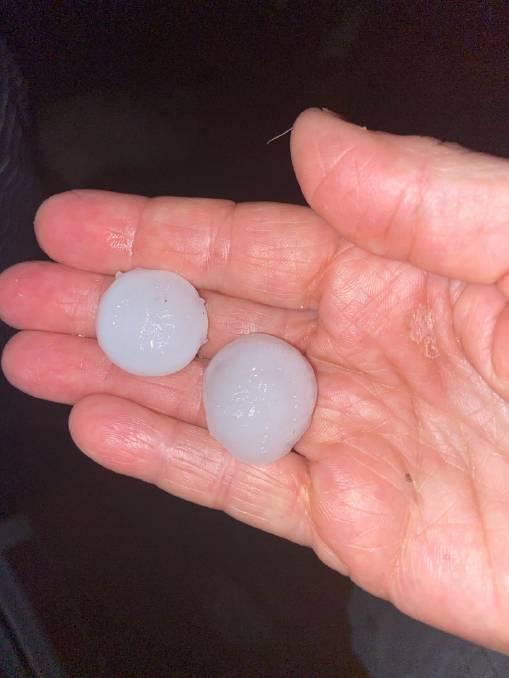 While the hail has virtually wiped out crops in concentrated areas, it is likely the larger cost of the week of storms in the long term will be the damage from excess moisture.

More generally, Mr Nalder said there were heavy falls in widespread areas to the east of Coonamble, with many tallies in excess of 70mm.

"There is going to be downgraded grain in many of the places that have had the heavier falls, some has shot already, but in other areas they're just waiting for it to dry out and hopefully it has handled it OK."

Rain was not as heavy in other areas, but farmers are conscious of the ongoing likelihood of rain and are nervous about potential downgrading.

"We had 30-40mm and we don't expect to have any quality issues as a result of this first rain, but the worry is what happens from here on," said Warren farmer Mark McKay.

"Especially on the stickier soil types if it keeps raining and we don't get good drying weather then we might see it hard to get a good run at it before another front rolls in."

Mr McKay has just begun on canola while neighbours have started on barley.

"Yields are very good for this region, some of the barley has come in at 5 tonnes a hectare, which is right up there, so we really want the chance to get it all off and not have any issues with downgrading, we've just got to get it in the bin."

Further north at Narrabri, Andrew Carberry said there had been falls of around 40mm which were causing hold-ups right as harvest kicked into overdrive.

"We were just getting going and we've had this rain.

"At this stage it is not too damaging, nothing like the hail we heard about over to the west, and will be welcomed by the summer croppers but we wouldn't want to see too many more systems like it," Mr Carberry said.

"Everyone is hoping this is the season that gets them back on track and after the good growing season we just hope we don't see issues over harvest."

The rain was patchy but generally the north-west, the northern central west and the Liverpool Plains were wettest of the cropping regions, with Nundle, at the headwaters of the Peel River, clocking in with a whopping 149mm for the week.

Across the Liverpool Plains falls of over 100mm were relatively common, however south of Dubbo the falls were not as significant and crops are not as mature so it is expected to do much less damage.

GrainCorp, in its first harvest update, reported it had received 688.000 tonnes of grain overall, with 428,000t from Queensland and 260,000t from NSW, primarily in the north of the state.

Further rain is expected over NSW and southern Queensland over the next week, although the Bureau of Meteorology (BOM) expects tallies in most inland areas to be below 25mm for the period.