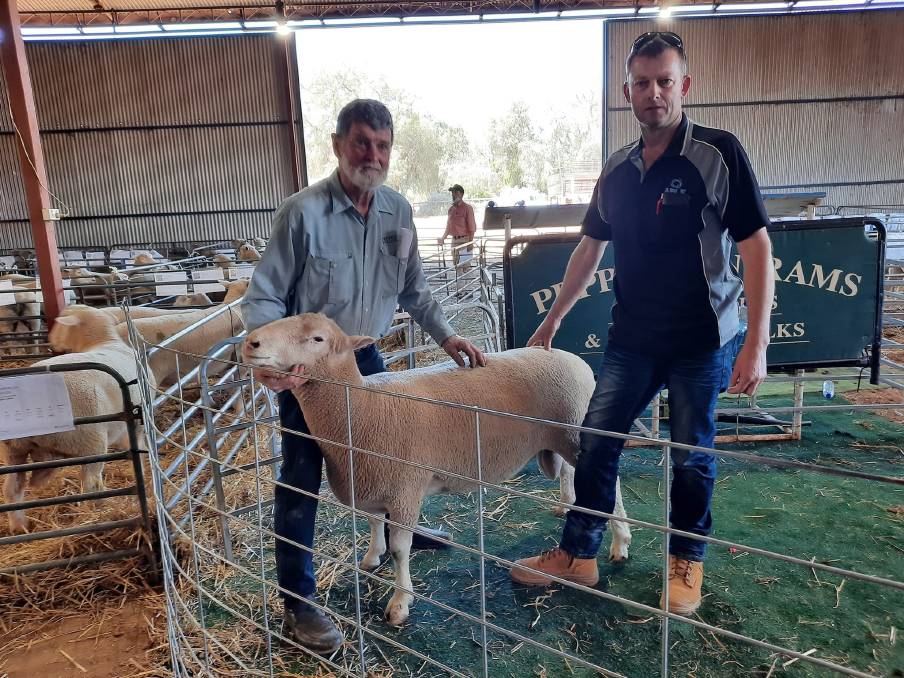 The Elmore stud recorded a 95 per cent clearance rate with 87 of the 92 rams sold to $3000 to buyers from locations including Shepparton, Camperdown, Tarwin Lower and Gundagai, NSW.

Stud principals Roger and Dianne Trewick said it was the highest offering of rams sold at their annual sale, up from 70 sold last year.

"The overall average was about $1537 which was $400 up on last year and we were very pleased with that," Mrs Trewick said.

"We were also pleased with the online presence because that did push prices slightly higher than 2019."

The sale was interfaced with Elite Livestock Auctions with about a third of the purchases coming from online.

The ram was described by Pepperton as the stand-out of its draft with a great presence and Lambplan figures to support its ability.

His Terminal Carcase Production Index was 160.13, while his Eating Quality Index at 161.36.

"These traits are well above the national Lambplan average," Mrs Trewick said.

Mr Keogh, who joins about 6000 cross-bred ewes annually, said the rams would be joined in mid-February.

"The rams have a good mix of figures and they're some of the higher weight gain rams out there," Mr Keogh said.

"Roger and Dianne are pretty good people to deal with and they're very honest people which is much appreciated."

Andrew and Jennifer Burrows, Camperdown, bought five White Suffolk rams to $1800, to average $1350 across the draft.

"We've had a good run out of them and we get good growth rates when we cross them with medium-size Merino ewes," Mr Burrows said.

"We've found we've had less birthing issues since switching to Pepperton about 10 years ago."

The rams will be joined in February to about 600 ewes.

Other prominent buyers came from Ballarat, Ararat, Stawell, Warrnambool, Colbinabbin, Raywood and Gunbower, as well as several from the local district.

Several of the purchasers were new clients to Pepperton.