Milk production in all three dairy areas of Victoria rose in August with western Victoria the strongest at 6.8pc. 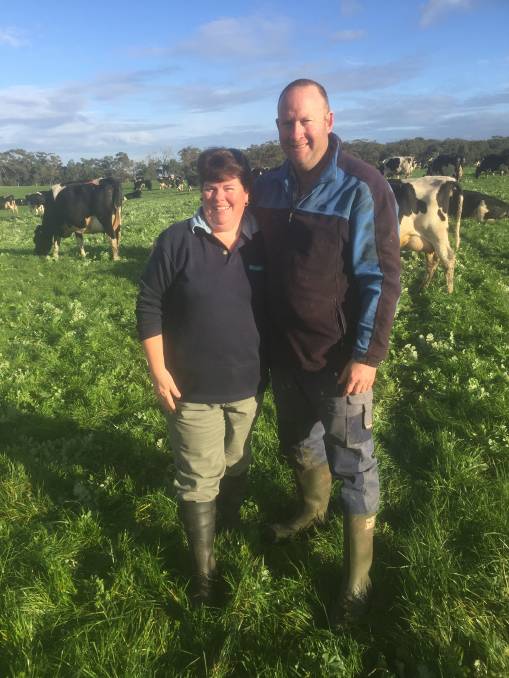 PRODUCTION UP: WestVic Dairy chair Simone Renyard, who dairy farms with husband Nick, says the exceptional season had a lot to do with the rise in milk production in western Victoria.

According to the latest Dairy Australia Milk Production report, as well as increases in Victoria, milk production also lifted in Tasmania by 9.8pc for the month and 6.3pc for the YTD.

South Australia also recorded a strong result with the state lifting production by 6.3pc for August and 5.3pc YTD.

The exceptional season across large parts of the south east of Australia was the major reason.

Dairy Australia senior industry analyst, John Droppett, said it had been a much stronger performance in August.

He said the improved season since the start of the calendar year had gradually increased production on the back of increased confidence, a new season with relatively strong prices and "lots of grass on farm".

Farmers had the confidence knowing what feed they had in front of them.

He said the biggest problem cold be harvesting that feed with the wet conditions.

Irrigators in northern Victoria had received good rainfall and there was some relief around water prices as well, which certainly helped confidence, he said.

Tasmania had come from a strong base and with a second year of reasonable farm-gate returns had been able to stretch production.

Mr Droppett said nationally farmers would take until near the end of the season to make decisions about herd size and future plans.

There were a lot of farmers who had "a pretty big hole to fill and there is plenty of risk aversion out there", he said.

"If we can clock up 12 months of good season and prices then dairy farmers might start considering incremental increases in herd size," he said.

WestVic Dairy chair and dairy farmer, Simone Renyard, said the seasons throughout most of the west had been exceptional after a drier than normal winter.

"We are getting the rain when we need it and there has been a lot of grass growing, there's a lot of silage, cows are milking tremendously well and a solid milk price," she said.

Some farmers on heavier soils and wetter conditions were suffering from too much water.

"Everyone says it's a good yer, a well overdue year. For some farmers who have been farming for 30 to 40 years they are saying it's the best season in their lifetime," she said.

Rarely do all the factors line-up, she said.

She said some farmers were upgrading the herd, consolidating debt and looking at capital opportunities that they hadn't been able to consider in the past few years.

NOTE: The Dairy Australia Milk Production report contains data based on a combination of voluntary direct reporting from processors, and data sourced from government agencies. Retrospective adjustments are possible if new or revised data is received.