The stud's previous top-price record was $3000. 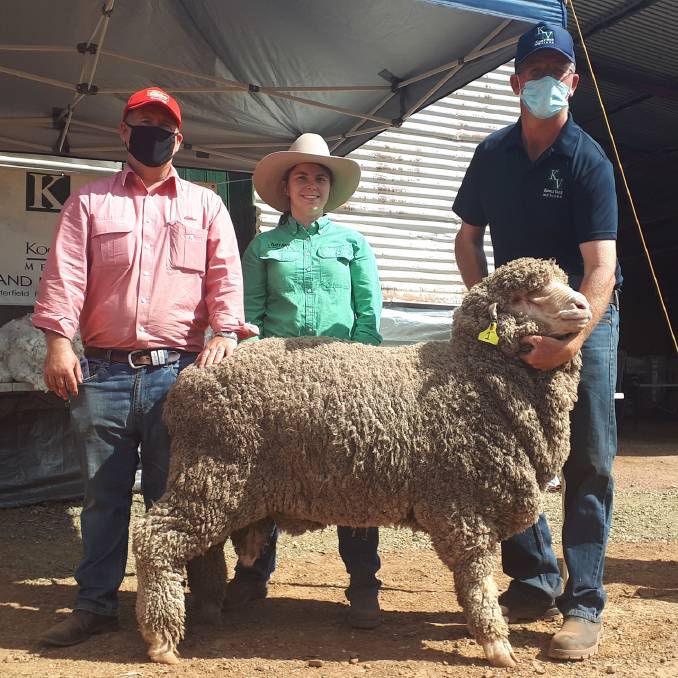 A Costerfield stud doubled its previous top-price ram record last week when a Merino ram for $7000.

Stud principal Alan Harris said he was blown away by the result after opting to offer 15 more rams compared to 2019 on Thursday.

"We were totally shocked by the results," Mr Harris said.

"I didn't expect to have such high prices.

"The previous top of our on-property ram sale was $3000 last year so to over double that (figure) three times was amazing."

Mr Harris said buyers were mainly from within a 150-kilometre radius of the property, including from Mysia in the north to Ruffy in the east.

"We offered more rams mainly due to the cancellation of the multi-vendor sales," Mr Harris said.

"We where worried a couple of months ago about how the sale would go but it worked out well."

The top-price ram, Lot 1, was bought by John Barty, Beverley Merino, for its number two stud.

The ram was sired by Oakbank Barry via artificial insemination and weighed 114 kilograms.

Koole Vale described the poll ram as the stand out of his drop for size, depth of body, stud outlook and outstanding structure.

"He was earmarked for our show team and to be sold at Hamilton Sheepvention but COVID-19 interrupted plans," Mr Harris said.

The ram was one of seven poll rams in the sale by Oakbank Barry which was crowned Supreme Champion at the Hay and Hamilton sheep shows in 2018.

Mr Barty said the ram would be joined to a flock of about 80 number two Merino ewes in late spring.

"It's the first ram we've bought from Alan Harris and we saw the ram and thought he would be pretty good to have a go with," Mr Barty said.

"He's a big, upstanding, well-structured ram and he's got soft-handling fine wool and that will match in with what we're trying to do in our number two stud which gives buyers a heavier cutting and poll alternative."

The equal second top-priced ram, Lot 14, by the same sire sold for $6700 and was bought by Jim Tattersall, Moormbool West.

The same clients also bought Lot 21, another son of Oakbank Barry, for $3000.

"The Gleesons have been long-time clients and bought our very first rams to be sold," Mr Harris said.

The top-priced White Suffolk ram was bought by new clients, the Farley family, of Derrinal, who bought three rams to $1300.

Andrew Campebll, Redesdale, was the volume buyer of the White Suffolks, selecting six to $1000.