Producing Saffron products in a sustainable way is driving this small farm enterprise. 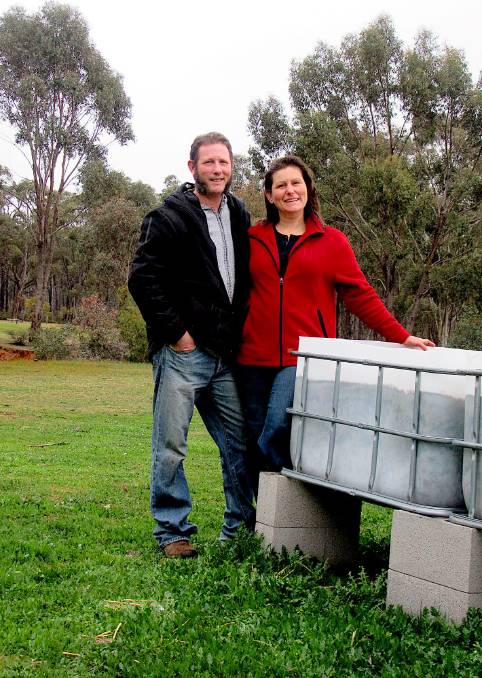 A DRIVING ambition to move to the country and go "off grid" necessitated a thoughtful approach to matching that with what sort of enterprise to run.

After careful consideration couple Rosie Pamic and Drew Black, found a match for not only the idiosyncrasies of off-the-grid living but something that also matched their individual strengths and the environment of their new home.

The answer to what to grow was Saffron, known as one of the most expensive products in the world.

The choice of a precious plant like the Saffron was a great match with the couple's selection of Dunolly as their new home site, located as it is in the centre of Victoria's 'Golden Triangle' home to some of Australia's largest gold nuggets.

The property making up Squirrel Gully Saffron is a four hectare block outside the township.

Ms Pamic left her job as a chef in Melbourne to join with Mr Black whose passion for off-the-grid living was honed using his experiences of 13 years as a Naval engineer.

Their credo from the start was developing a product that was hand picked and produced in a sustainable way - on "a path less travelled".

Mr Black spent ten years prior to the move researching alternative energy and off-grid systems and that forms the basis of the farm today with its solar array, battery banks and water harvesting and storage.

Ms Pamic's background was in kitchens and she knew she wanted to do something food related - but because of the reliance on a battery bank, anything that required a cooling system or heating system, created a huge drain on the battery storage.

"We needed to be conscious of steering clear of things that needed refrigeration or a lot of water, because we are working with rain water," she said.

We needed to be conscious of steering clear of things that needed refrigeration or a lot of water, because we are working with rain water - Rosie Pamic, Squirrel Gully Saffron, Dunolly

"Saffron blooms in autumn and flowers from April through May, and goes dormant in summer," shes aid.

"When we get those 40 degree-plus days in January, the plant is underground and foliage died down and doesn't need water. They also withstand winter and frosts.

"Not a lot of plants will love frosts and hot weather. The Saffron also suited the small scale of the farm, not requiring a large area."

She said it ticked all the boxes and "as a chef I was excited about all the uses of Saffron".

"People aren't aware of the possibilities - I could see 100 recipes out there," she said.

Ms Pamic said the natural soils of the block were heavy clay.

She said Saffron was sensitive to 'wet feet' and liked good drainage.

"We went for raised garden beds rather than having to use large amounts of chemicals and fertiliser to bring the soil up to a standard for Saffron," she said.

She said there was also a high chance of storm events during January that would wash-away soil into nearby waterways.

The beds were 'wicking beds' made from used, food-grade plastic bulk containers (plastic tubs) with the top cut off.

The Saffron corms were planted in soil above a drainage layer and the container had a release valves to siphon off excess water if necessary.

The good drainage reduced the chances of fungal diseases.

The raised beds - to about waist level - also made harvesting the Saffron, which was done carefully by hand, more ergonomic - saving on bending or kneeling.

"Because we are containing the soil we can micro-manage the soils. We want to be chemical free with the idea of growing something we are happy to eat ourselves," she said.

"We added worms into each bed to generate a natural exchange of nutrients to help keep our soils nice and healthy."

Ms Pamic said picking started around Good Friday and until the end of May.

She said harvest was labour intensive. To ensure good quality Saffron picking was staggered during the day to pick the flowers that had just opened.

The stigmas were separated from the petals ensuring they remained whole then dried using a dehydrator to monitor the temperature more precisely.

The process was done the same day as picking.

Saffron was used in cooking, fabric dying and the perfume industry.

Ms Pamic said that as well as selling dried Saffron in gourmet gift packs for the home cook, they supplied cafes and restaurants in 0.5 and one gram jars.

She said they also worked with a business using natural dyes.

The result has been the manufacturing of scarves dyed with Saffron.

"I like to work with other local groups including Food Fossickers, in Bendigo, and Oakwood Smallgoods Co, in Castlemaine. She said one of the products was a Paella kit for homes that was born out of lockdown in March.

"The kit is designed so that even though you can't go out and eat at a restaurant, you can have a restaurant-style dish at home made from locally produced ingredients and our Saffron," she said.

She said with coronavirus restrictions they were also using online platforms to market products.