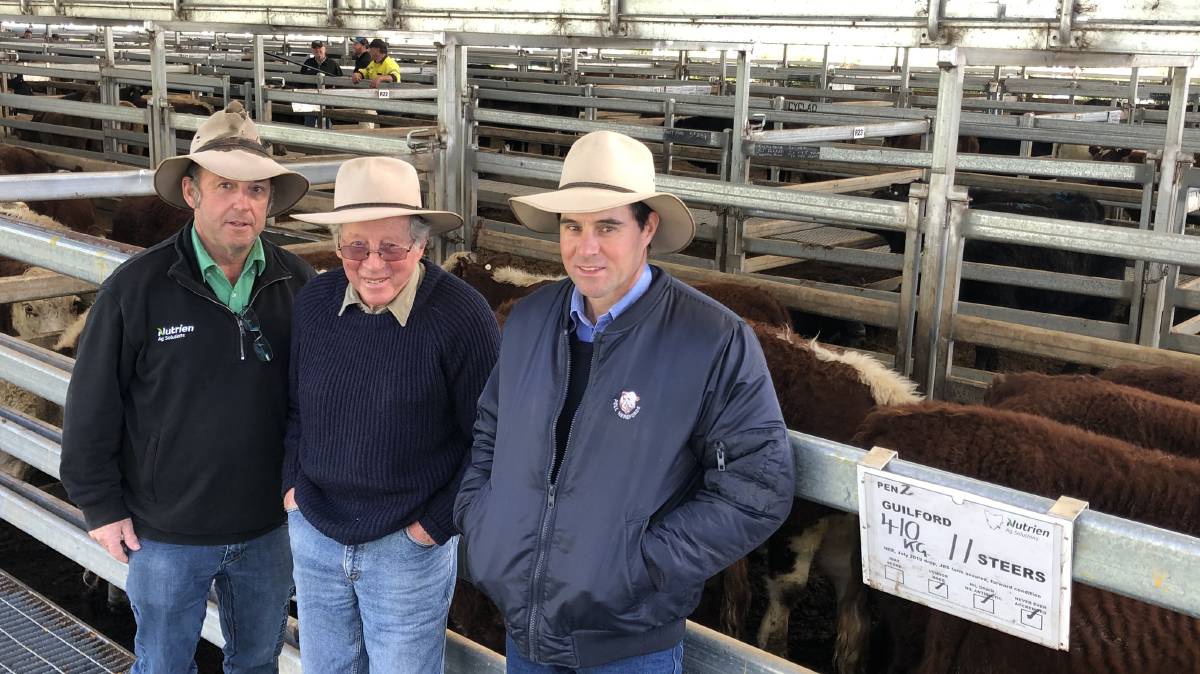 SOLD: Nutrien Livestock agent Rodney Batchelor with clients Bert and Philip Davies, Guilford, Ouse, Tasmania, with a pen of 11 of their steers, 410kg, which made 412c/kg or $1690 at Powranna.

Aggressive restocking has narrowed the price difference between yearling steers and heifers at some Victorian saleyards to the lowest point in more than three years.

A combination of interstate demand coupled with promising seasonal conditions for most of the state has bolstered demand for breeding stock considerably in the last six months.

Fresh data by Meat & Livestock Australia shows the price difference between weaner steers and heifers sold at the Victorian Livestock Exchange at Pakenham reduced from an 80 per cent premium to just a 2pc premium between February and July.

Similar data shows store prices at Roma, Qld, have also narrowed between yearling steers and heifers, however, less than Pakenham with steers receiving a 20pc premium.

"Traditionally steer prices always hold a premium of about 20pc over heifers as a rule of thumb and when it gets wetter and the forecast improves, that premium can narrow to 10pc," he said.

"Pakenham is mirroring what we're seeing in New South Wales and southern Queensland which shows there's very strong desire to restock even in Victoria." 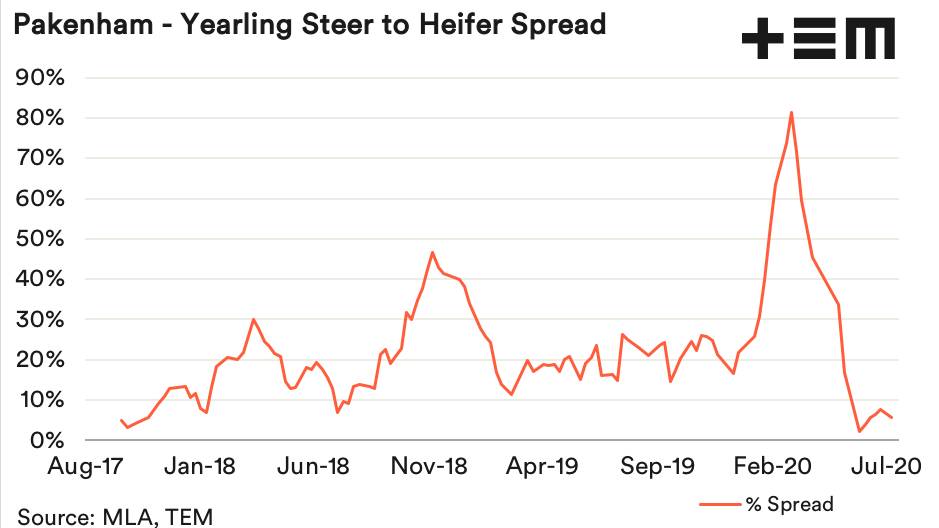 GRAPH: The spread or price difference between yearling steers and heifers sold at Pakenham. Graph by Thomas Elder Markets.

At Ballarat, the yearling steer-heifer spread dropped to below 10pc in May but has since risen to above 20pc.

"[This is] probably indicative that the season in the Western District last year was relatively wet and this may have favoured holding onto more females compared to elsewhere, or at least saw a lower level of female turnoff," Mr Dalgleish said.

The buying gallery was made up mostly of restockers but also consisted of feedlot operators and processors with buyers showing a particular interest in Angus and Angus-cross females, Stocklive manager Libby Hufton said.

Of the cattle sold online, 69pc remained in Victoria while NSW bought 19pc, followed by SA with the balance.

"Fifty-four per cent the lots purchased online at the SWVLX were heifers ranging from 190-470kg," Ms Hufton said.

"We continued to see this trend at the CVLX with 65pc of the lots purchased online in the heifer category ranging from 219-516kg."

Nutrien Pakenham auctioneer Andy Grant said there were a number of reasons why heifers were closing the gap on their brothers.

"Are people looking to breed heifers or just fatten them? That's one thing increasing demand," he said.

"The other is people are hell bent on minimum outlay and a year ago you would have said heifers were $100 cheaper than steers but now that margin is much less."