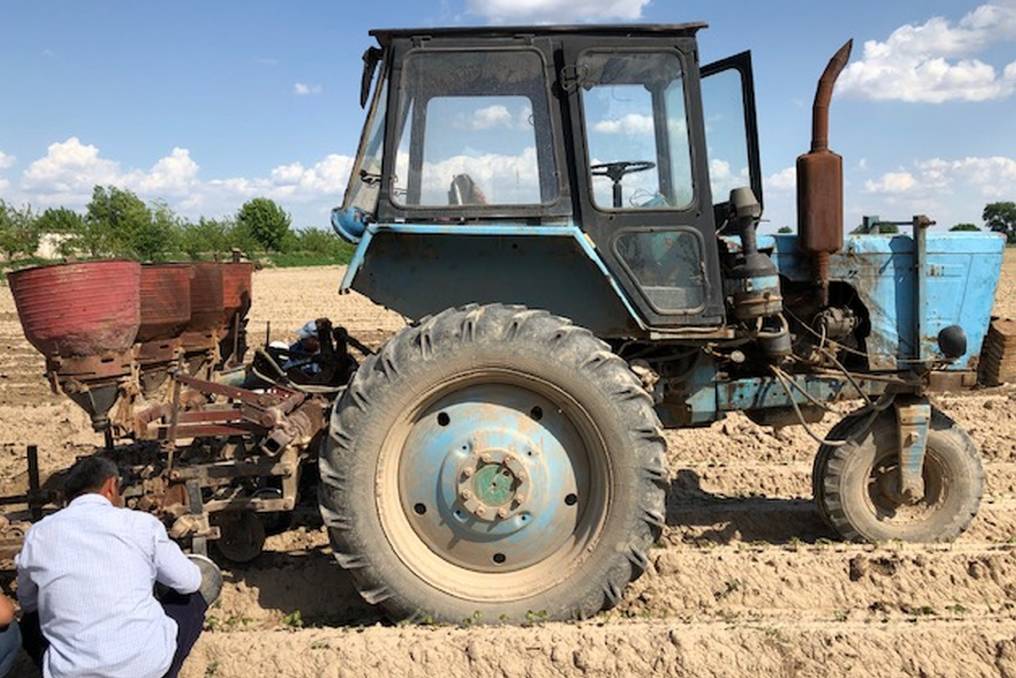 Old school: This basic cotton planter and ageing tractor were typical of machinery used on massive irrigated farms in Uzbekistan before Indorama Agro began its big-spending upgrade a few years ago.

In what was a totally unexpected and unusual request two years ago, Mr Corish was called in to help a massive private farming venture adopt Australian cotton growing technology and techniques in the land-locked communist Central Asian country.

Over the next 18 months, as drought conditions at home kept his own family's cropping activity in a lull, the advisory job took him back and forth to the former Soviet state 14 times.

When the coronavirus pandemic closed down international air travel in March the former Cotton Australia chairman reverted to remotely supervising a team of Australians and Indians managing the work back in Uzbekistan.

It has also recruited Australian engineering and agronomy specialists and farm managers to help tackle the overseas challenge.

"It is a challenging physical environment, with a lot of cultural and technology hurdles to overcome, and its a long way from modern equipment suppliers, but we've made a good start," Mr Corish said. 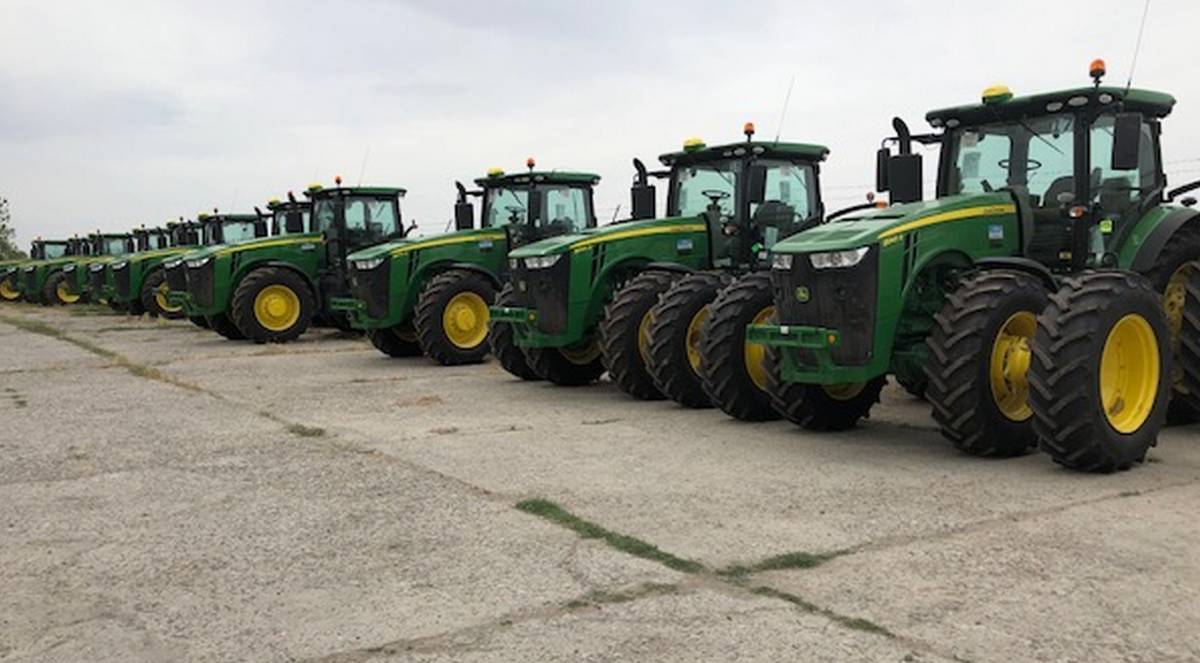 Some of the 30 GPS-guided John Deere R8 tractors now used by Indorama.

Uzbekistan and its "stan" neighbours Kazakhstan, Turkmenistan, Tajikistan and Kyrgyzstan had a deep livestock and farming heritage, yet were largely isolated from many technology advances by generations of Russian rule and the more recent challenges of adapting to self rule and new markets.

However, aged water infrastructure and poor water use and agronomy techniques mean cotton yields are typically just 3.5 bales/ha - about a third of Australia's national average.

Despite bitter sub-zero winters, sizzling summers and an average annual rainfall of just 200 millimetres, Uzbekistan grows a respectable 3.5 million bales of cotton a year - similar to Australia in a more typical season.

Up to 4m hectares of broadacre and horticulture crops are largely watered by rivers of melted snow from the Himalayas in the south.

But productivity is hamstrung by the nation's collapsing 80-year-old Soviet-era irrigation network which is alarmingly wasteful, and farm machinery is typically more reminiscent of gear used in Australia in the 1960s or '70s.

Indorama has spared little expense in its goal to redevelop its farms into modern and sustainable operations to feed its nearby textile mills with reliable supplies of local cotton.

The corporation is not just worried by the risks posed by old, inefficient and environmentally damaging farming methods, but also the general decline in cotton and grain production in Uzbekistan as farmers pay increasing attention to higher margin returns from horticulture and tree crops. In three years that fleet has grown to include about 100 new John Deere tractors, 32 cotton pickers and eight headers.

Two new cotton gins and other farm infrastructure have also been built.

Australian resources involved in the project include six farm managers with cotton and graingrowing backgrounds working full-time in Uzbekistan.

I was quite apprehensive at first, but it's been such an interesting and positive challenge - Peter Corish, Corish Farms

Technical services have been provided by Australian-based seed companies, and irrigation design outfit SMK and agronomy and management firm MCA Ag, both based in Goondiwindi, and farming expertise from Corish Farms.

"A lot of our hands-on skills have come via people who were considering retiring, or had really reduced workloads at home because the drought was taking its toll," said Mr Corish.

"The timing of this opportunity on the other side of the world was quite fortuitous.

"It's something I'd certainly never anticipated doing - and I was quite apprehensive at first - but it's been such an interesting and positive challenge." Peter Corish (third from left) with some of the international contingent involved in the Indorama project's management in front of a mosque in Muslim Uzbekistan.

Mr Corish, who served as NFF president from 2002 to 2006, and had headed the peak cotton industry body in the 1990s, was sounded out about applying Australian expertise in Uzbekistan by the Indorama officials in Jakarta whose past links with the Australian industry boss included buying Corish Farms cotton.

In the past two years 8000ha of land and irrigation channels have been redeveloped - about 10pc of the total task ahead.

Mr Corish said the aim was to double current yields to near six bales/ha and cut water use close to Australian benchmarks around 7.5 megalitres/ha.

Importantly, he said the work aimed to rehabilitate existing farmland which had deteriorated in the past 30 years.

"We're not developing new hectares like the vast areas you've seen opened up in Africa or South America," he said.

"I do get asked if we're creating potential market competition for Australia, but I doubt if the production gains achieved by Indorama in Uzbekistan will alter the volumes they currently buy from Australia." 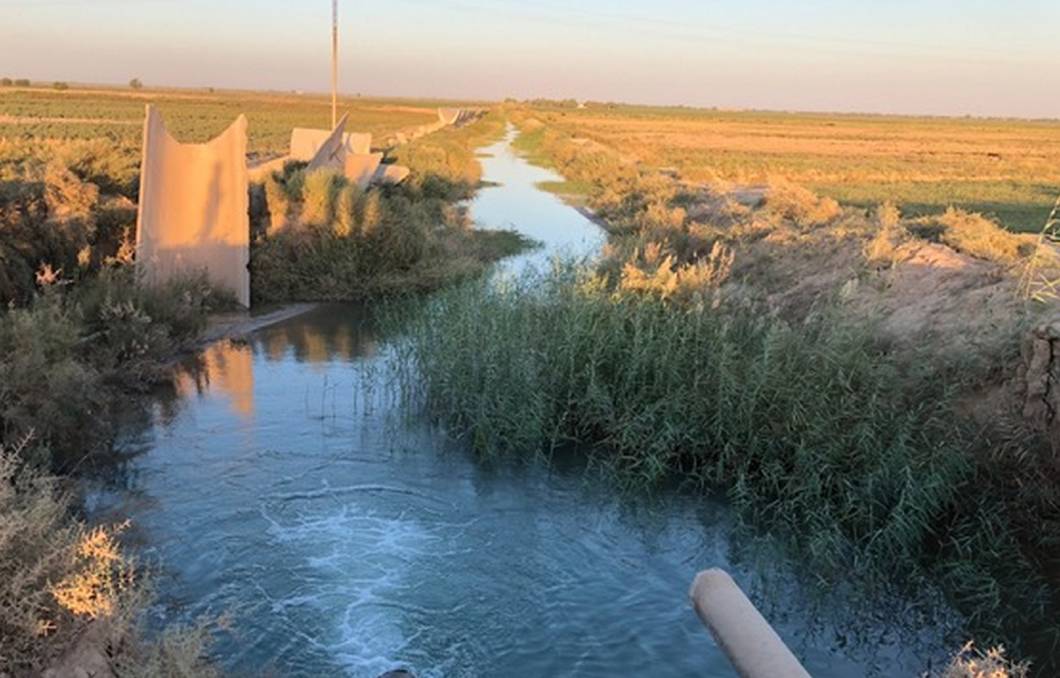 However, while a socialist state, the Uzbek government was encouraging private partnerships to modernise its farm economy, which dates way back to the country's position on the ancient Silk Road trade route between China and the Mediterranean.

"I won't be surprised if genetically modified cotton is introduced in the next few years," he said.

"I see lots of potential for modern feeding and management systems for sheep and goats, and crops like cherries, apricots and vegetables.

"They'll move quite quickly, but they've also got a long way to go, and a lot of culture and history to take with them."