"Border bubble" causing the most confusion, for Victorian farmers, industry. 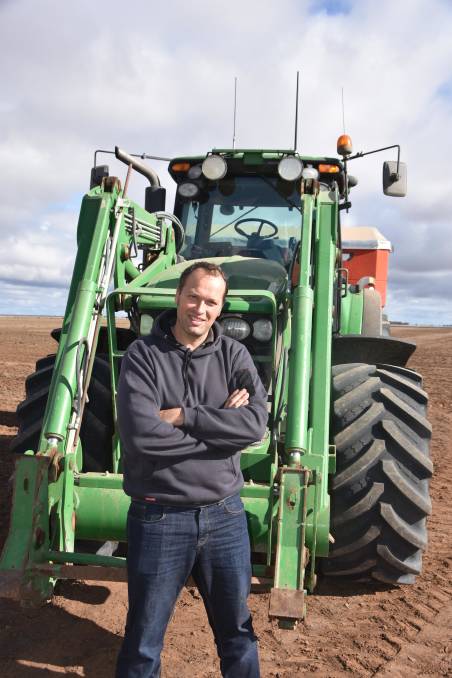 Changes by the NSW government to cross-border travel mean Victorian farmers can no longer gain access to their properties, according to Agriculture Minister Jaclyn Symes.

"I'm working with the NSW Agriculture minister on this," Ms Symes said, on social media.

Changes by the NSW Gov to the NSW/Vic border permit system Fri night has meant some farmers can no longer access their farms. I’m working with the NSW Ag Minister on this - please let me know if you’re impacted.

"We were just outside the 'border bubble', and I am on my fifth separate border permit, in two weeks," Mr Fraser said.

Rutherglen was included in the 'border bubble' from Monday.

NSW and Victoria have declared a "border bubble", covering an area north and south of the Murray River, with the aim of easing movement for residents and essential services workers living in the designated area.

The 'critical services - border region' permits allow someone from the 'bubble' providing an essential service to cross the NSW border into the border zone or border region.

"Confusion reigns would be an understatement," Mr Fraser said.

"You have the Victorian government making COVID restrictions, then the NSW and South Australian governments in charge of the border closures - they don't seem to be talking to each other."

He said it didn't appear authorities in Sydney and Melbourne were consulting with border mayors, who were taking a common sense approach.

"As long as it's done with a commonsense approach, we will get the same outcome without the heartburn."

Invergordon hay contractor Luke Felmingham said he'd recently sent three loads of fodder to the Blue Mountains and Bateman's Bay, NSW, but had not experienced trouble at the border.

"We tried to get tests, in Victoria, but no-one would do it because they will only test if you have symptoms," Mr Felmingham said.

"There is a lot of confusion.

"With one driver we sent, no-one would test him and no-one stopped him at the border, because he was carting hay.

"They (the border crossing authorities) keep saying they will find out what's happening, when it filters down from the state government."

He urged authorities to resolve the border testing and permit issue, before harvest started to ramp up.

"By late August and early September it will really start to get busy, and we are going to need some pretty good rules and guidelines, by then."

Coby Pearce, a Swan Hill agricultural and hay contractor, said there was a bottleneck, at the Victorian-NSW border, due to the amount of paperwork drivers were required to produce.

"We have to get online, every seven days, to get a new permit and we are getting our drivers tested, for safety's sake," Mr Pearce said.

He was also delivering loads into Queensland.

"Because we are delivering to right on the border, at Goondiwindi, the authorities see you are from Victoria and they look at you a lot harder and try and find ways to kick you out," he said.

"The laws are changing every day, we are told one thing, but the authorities have different rules."

He said he knew of people travelling into NSW who were not farmers.

"Being locals, we know what they are doing, and they aren't essential services."

He called on the authorities to do more than issuing fines to the "odd Joe Blow" to set an example.

Mr Pearce said he had to check if the regulations had changed, every morning.

"It's just a constant thing, it's another job that takes a few hours of your day, when you could be doing other things," he said.

Bridge closures had also affected the business, with two of his machines stuck at Deniliquin.

"We can only cart in daylight hours, it's another bit of red tape, we have to cross."

Beck Wolfe, Peacock's Transport and Hay Contracting, Rochester, said her company was outside the "border bubble.

"We are still carrying agricultural machinery and there is no issue with the trucks, aside from it being tedious, with getting the paperwork sorted," Ms Wolfe said.

"There is not a lot of hay moving, at the moment, but we are still carrying agricultural machinery.

"There is no issue with the trucks, aside from it being tedious, with getting the paperwork sorted."

She said she'd been told they couldn't get a permit, and even if the company were to get an endorsement letter, the only way into NSW was to fly to Sydney.

"Why is nobody thinking logically?, Ms Wolfe said.

"We are hay contractors, we have customers over the river, and it looks like we won't be able to service them, this year, unless something changes in the not too distant future."

She said staff needed to get across the river, to see how the crops were going.

"We need a better timeline as to when to get our gear across - it's making it really difficult.

"Transport wise, we are not having any issues, it's the hay contracting side of our business where there are problems."

"We have some pretty strict guidelines around our drivers, what they can, and can't do - it's challenging, but I don't think it's insurmountable," he said.

The company, which provides grain marketing, transport and container packing services, has been delivering product into NSW.

"Fingers crossed, we can get through the next six weeks and it does show some signs of improvement," Mr Lewis said.

Mr Jochinke said Victorian farmers and agricultutural contractors faced the biggest hurdles when crossing into NSW, due to holdups at checkpoints and the difficulty in getting permits.

"There is confusion, with so many changes to requirements, restrictions and eligibility," Mr Jochinke said.

Mr Jochinke said Victorian farmers, outside the bubble, had no ability to gain access to their NSW properties, crops or livestock.

"It's an absolute disgrace," he said.

"We need a separate agricultural category, for farmers to get off their property and venture out of the 'border bubble'," Mr Jochinke said.

"At the moment, it's NSW that is causing us the most headaches, they have had six or seven changes to their permit system in two weeks."

Under the changes, anyone crossing the southern border without a permit, has to go into hotel quarantine for 14 days and pay the $3,000 to cover it.

Mr Jochinke said the VFF had met with a group of key agricultural supply chain stakeholders.

They raised concerns about the difficult of getting through border checkpoints, when shifting produce, and ensuring workers could travel into NSW and South Australia.

"We need, as an industry sector, for governments to consult with us, before they make decisions," Mr Jochinke said.

Meanwhile, a peak transport body says a new approach to freeing up cross-border transport, by the national cabinet, must be supported by state governments.

"Our supply chains can't afford for the Code to be a document that is signed and ignored," ALC chief executive Kirk Coningham said.

The ALC also welcomed the Code's commitment to integrating testing into driver schedules and ensuring symptomatic and asymptomatic cases were kept separate at sites.

He urged the Victorian Government to open testing to asymptomatic freight workers as quickly as possible, given that a number of other states had already mandated testing every seven days.

"With the extraordinary pressures on Victoria's testing capacity at present, it may be appropriate for the federal government to provide the state with some additional support to help make this happen, in the interests of national supply chain efficiency," Mr Coningham said.

The Australian Trucking Association has also backed a more consistent and enforceable code, for screening drivers and other freight workers for COVID-19.

ATA chair David Smith said operators would now just need to develop one plan on their home state's template, not a separate one with the same information for each state.

"The facilities will operate for extended hours that meet industry needs, with the capacity for 24 hour operation where practicable."

Drivers passing through Melbourne are also subject to the stringent movement rules, required under the stage four lockdown.

Victorian Transport Association chief executive Peter Anderson said the rules applied, even if drivers were traveling through the stage four lockdown areas, but not stopping or loading.

" If they are pulled up by police in a car or truck they must have evidence of a COVID Safety Plan and a Permitted Worker Permit,' Mr Anderson told the Livestock and Rural Transporters Association of Victoria.