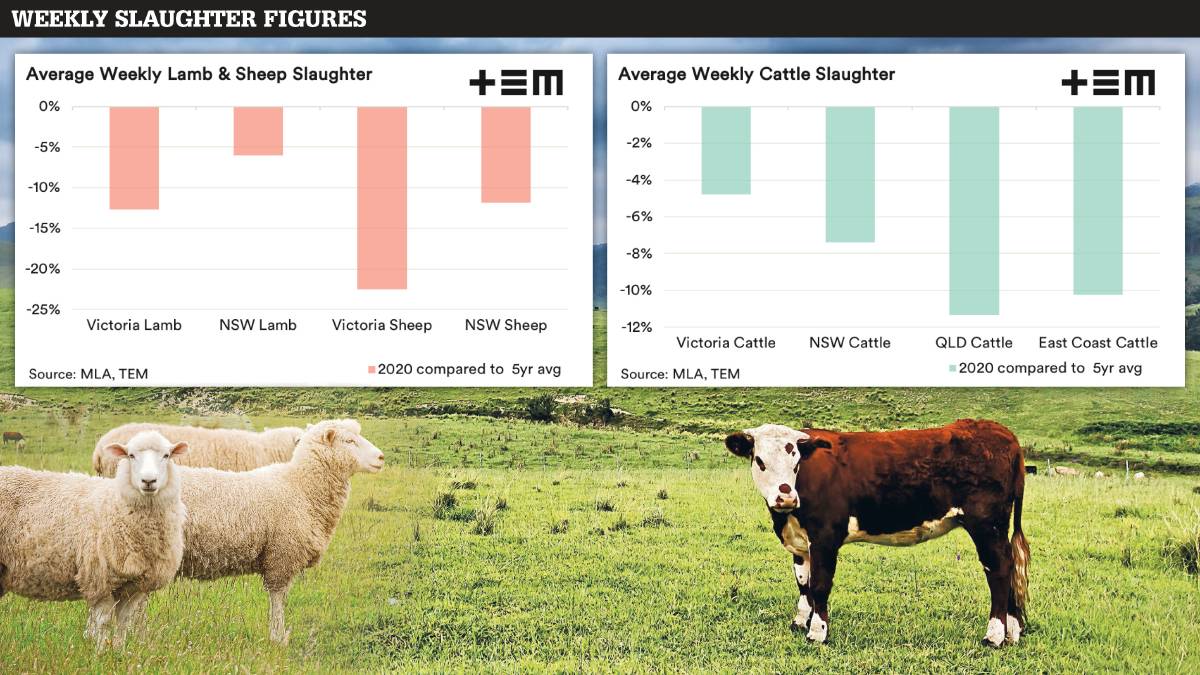 AMIC urges farmers to talk to processors about how restrictions will affect livestock sales.

The peak body for meatworks has a stark message for livestock producers: talk to your processor and do it now.

After the announcement that meatworks would be restricted to two-thirds of their peak workforce capacities from Friday night, Australian Meat Industry Council (AMIC) executive officer Patrick Hutchinson urged farmers to get on the front foot.

"I'd be saying to them that they need to be talking to their processors very quickly," he said.

"And they need to be trying to figure out what key metrics the processors are potentially going to be looking at, on a case-by-case basis. That includes things like forward contracts.

"What do people need to be holding back, certainly in the areas of cattle? What do we think it's going to mean for the spring lamb flush?

"There's a whole host of things that potentially need to be discussed and we're still, ourselves, trying to figure out the metrics around this."

The spring lamb flush normally brings a spike in processing activity, with Victorian meatworks processing about 51 per cent of Australia's sheep and 15 to 20 per cent of the nation's cattle, according to Mecardo business development manager Olivia Agar.

She said the VFF's talks with government throughout the COVID crisis were focused on implementing the necessary steps to protect agriculture and the supply chain.

"As a result, the agricultural industry is one of a few industry sectors that has been allowed to continue," Ms Germano said.

Still, that had not prevented the panic buying of meat after the restrictions on meatworks were announced.

"Changes to the meat processing industry is causing anxiety among our farmers and consumers," she said.

"It is important to remember that these changes are temporary."

The restrictions are planned to be in place for six weeks.

Will the quiet season help?

Thomas Elder Consulting manager of commodity market insights Andrew Whitelaw said that, due to the poor seasonal conditions that had shrunk the state's flock, most Victorian abattoirs were currently operating at about 80pc capacity.

"If we can get on top of it now for the next six weeks... we can get abattoirs running at full capacity come spring break - that will be a godsend," Mr Whitelaw said.

Even so, AMIC released a statement the day of the announcement saying its members expected output to drop 30pc.

Mr Hutchinson said that fall in output would apply to normal seasonal volumes rather than peak capacity.

"We think that overall we'll see a 30pc reduction, regardless of the quiet time of season, because essentially, we just won't have people in those key areas to be able to manage the chain speed that we would normally run at," he said.

"These processes run like a bike chain and you can't run them with missing links," Mr McKenna said.

Processors privately told Stock & Land that slowing the chain speed was technically possible but it came down to economics.

And Mr Hutchinson said some of Victoria's largest abattoirs might even close, while smaller operations were more likely to remain viable under the restrictions.

"The larger guys are very concerned about running at two-thirds capacity at all, because of that economic viability, and some have said they could shut for their seasonal shut down, because it would just be too much to be able to manage," he said.

On Wednesday, meatworks across the state were still trying to come to terms with what the restrictions would mean in practice.

While the on-site workforce is to be reduced by one-third from peak capacity, details like how administrative staff numbers would be treated were yet to be clarified by the government and could provide meatworks some leeway to maintain production.

JBS Australia declined to comment but Greenham group general manager Tom Maguire said it was working with the government and industry bodies to implement the new rules by midnight Friday.

"The health, safety and wellbeing of our people is our top priority as we work through what these changes mean for our business," Mr Maguire said.

"We remain confident that we can maintain continuity of supply to our key customers during this period."

The new buyers of Tabro Meat, MMG, which had expected to reopen the Lance Creek abattoir near Wonthaggi in late August or early September, were also adjusting their plans.

"The announcement will not affect materially Lance Creek's restart but the decision has been made to put back the opening to October to allow for this spike to pass," and MMG spokesperson said.

"Will will bring the restart forward if we are able to but are now planning for a slight delay to reduce the risk of opening and then shutting."

Ms Germano said it was too soon to say how the abattoir restrictions might affect livestock prices.

"Given the unprecedented nature of these restrictions, it is not necessarily possible to accurately predict the actual impacts at this point in time," she said.

"Some of the impacts may take some days/weeks to wash through the system."

Thomas Elder Consulting's Andrew Whitelaw said that, while prices would be incredibly volatile, there was no reason they would plummet in the way US prices did after coronavirus closed slaughterhouses.

"The difference between this shutdown and the shutdowns in the US is that the US closures were was quite widespread and they had the shutdowns back in March/April, whereas these shutdowns, touchwood, so far, are only in Victoria and so we still have the capacity to send animals interstate," Mr Whitelaw said.

Mecardo's Olivia Agar said the ability to shift stock interstate for processing had already been tested by COVID-19.

"In recent weeks even, while slaughter numbers have been down in Victoria ... supply chains have been responding with New South Wales soaking up some of the processing while Victoria's had plants closed down because of COVID outbreaks," she said.

But Mr Hutchinson said the rebuild in other states and logistics costs would limit any benefit.

"We don't think abattoirs interstate can help cushion any impact," he said.

"Our members have certainly not come forward to say that they think moving product or moving livestock interstate and then bringing their product back again is going to be helpful and that's some of our really big members who have facilities in other states."

The VFF would continue to engage with industry partners and government, Ms Germano said.

"At the end of the day, we need these lockdowns and workplace arrangements to work so we can quickly return to business as usual."