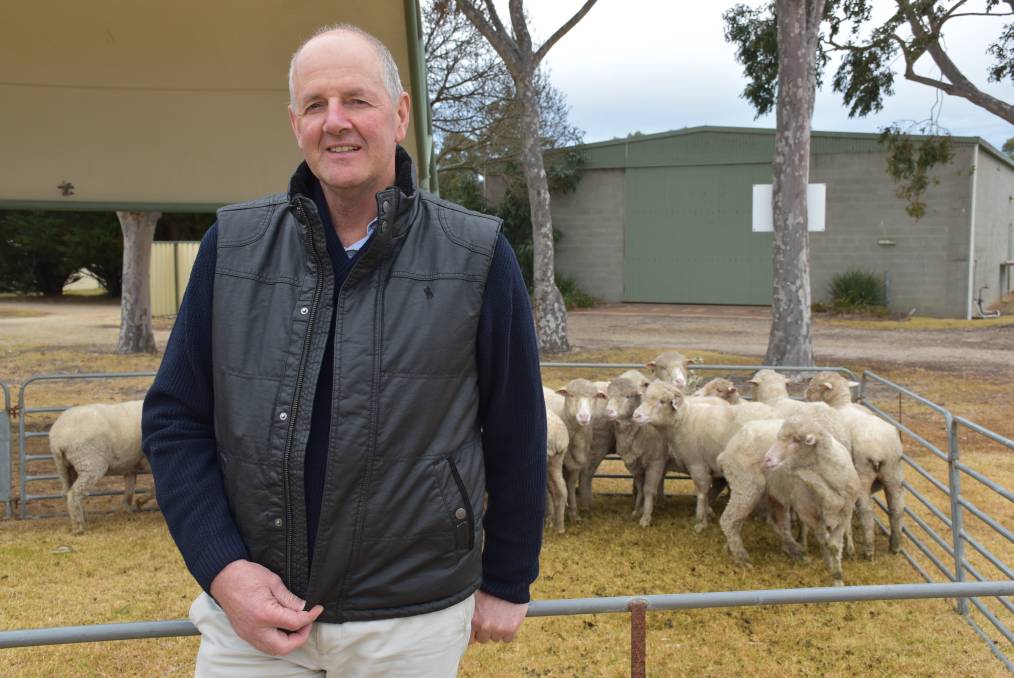 CROPPING BOOM: Good soils and rainfall have boosted the prospects for cropping, in the south-west of the state, says Mecardo general manager Robert Herrmann.

South-west follows the trend of switching from sheep to crops.

With wheat yields approaching nine to 10 tonnes a hectare, there's been a cropping boom in a vast swathe of south-west Victoria, from Inverleigh, through the north of the Corangamite Shire, and across to Derrinallum.

Leading market analyst Mecardo managing director Robert Herrmann, said a report he'd done on the closure of the Geelong saleyards, pointed to the trend away from livestock.

The report published three years ago, showed a clear move away from sheep and lamb production, in favour of crops, since 2008.

"We used a term that came out of the United States, 'the fight for acres," Mr Herrmann said.

"The fight for acres was between Merinos and cropping, and cropping has won, hands down."

But he said the switch appeared to have stabilised, in recent years, as sheep and wool prices had again risen.

"Those who either were too stubborn to change or didn't want to get on a tractor, have done very well, in recent years," he said.

"Wool prices tend to have short, sharp spikes, which meant some producers missed out."

He said after some initial trial and error, crop growers managed to get their production systems right.

"There is another factor in that all the yields they are getting down there are extraordinary," Mr Herrmann said.

The use of raised beds, and minimum or low-till practices, coupled with new varieties and research, had seen yields approaching those in the United Kingdom.

In parts of the south-west, around Derrinallum - with its good soils and heavy rainfall - it wasn't uncommon for wheat yields of up to nine to 10 tonnes a hectare, compared with three to four tonnes in the Wimmera.

"I can tell you when you start to work it out, on $350 a tonne, you are talking extraordinary incomes."

In Victoria, the Australian Bureau of Agricultural and Resource Economics and Sciences has reported the area planted to winter crops is forecast to increase by nine pc, in 2020-21 to 3.4 million hectares.

The area planted to wheat was forecast to increase by nine pc, to 1.6 million hectares, or four pc above the 10-year average to 2019-20.

The production surge reflects the spike in area sown to crops in the rain-graced south, at a time when the state's north is experiencing dry conditions.

And another analyst, Andrew Whitelaw, Thomas Elder Markets, said the trend reflected one evident throughout Victoria.

"This is due to a move to higher levels of cropping," Mr Whitelaw said.

"The correlation between sheep numbers and cropping acreage is robust, meaning that when people move out of sheep, it tends to be into cropping."

He said he'd heard the switch to cropping was driven by economics, ability to scale machinery and lifestyle choices.

"As the skill for raising sheep leaves the industry, it will be harder to increase the flock," he said.

He said the average increase in cropping, for the past five years, was 70 per cent higher, than the first five years of the 1990s.

The average increase for sheep production, for the past five years, was 46pc lower than the first five years of the '90s. 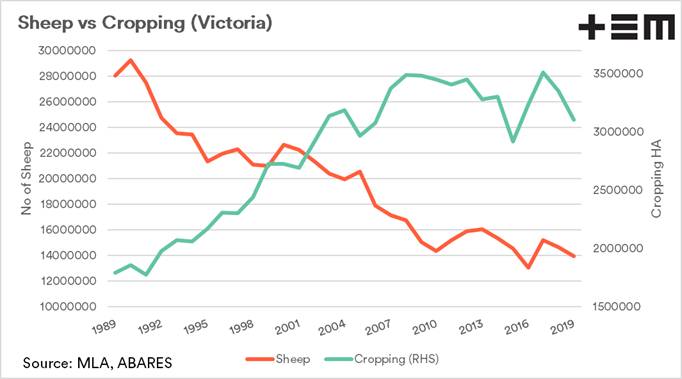 GrainCorp last week gave the green light to a $3.5 million expansion of its Berrybank site, on the Hamilton Highway, west of Geelong, after Corangamite Shire Council approved the plans.

The grain handler is preparing to add three new grain bunkers, a weighbridge and new truck entrance as part of major works.

That'll increase the site's capacity from 70,000 tonnes to 130,000 tonnes of bunker storage, in time for this year's harvest.

"The whole western district has seen a step-change, over the last five years, and a 70 per cent increase in production," Mr Lotz said.

"It's huge - it's going from straight livestock production to more mixed farming, to straight grain production."

He said the high rainfall and good soils were driving the shift to cropping.

GrainCorp had been looking at expanding Berrybank to provide the capacity growers in the region were looking for.

Berrybank would offer an alternative to going into Geelong, where there was sometimes a bottleneck.

Crops would go to either domestic or international, markets, from Berrybank.

"They could go direct to a domestic home straight away; we have feed wheat going from Geelong, up to Fisherman's Island (Brisbane) and the Darling Downs."

He said GrainCorp already had 10,000 tonnes under contract.

"I am positive, with our team's alignment, we will achieve a full site, this year." 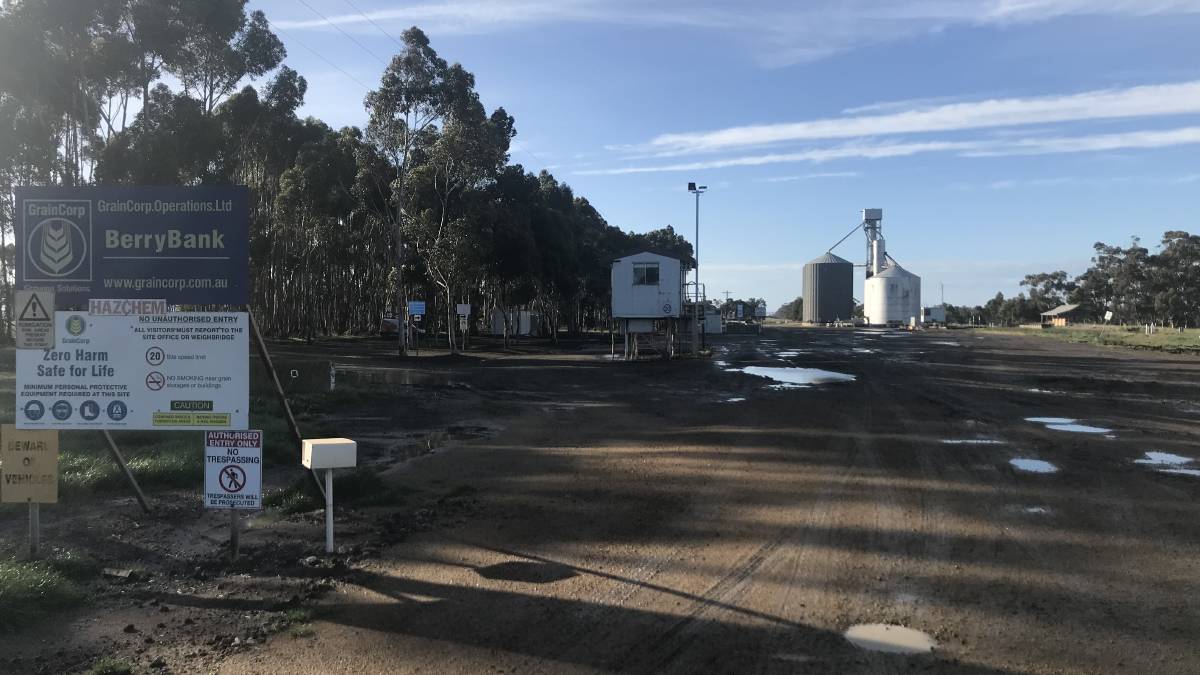 SITE EXPANSION: The GrainCorp board last week gave the green light to the planned expansion of its Berrybank receival site.

And leading Camperdown real estate agent, Rob Rickard, Elders, said buyers were also coming from other parts of Victoria and NSW to expand their cropping operations.

"Traditionally people have looked at our region for its high and secure rainfall," Mr Rickard said.

"We are now finding the cropping marketplace is stronger than the grazing buyer."

He said it had been building up for the past 15 years.

"Year in, year out, people are producing consistently more grain, in our region, due to raised bed cropping," he said.

"Farmers are finding they are getting consistently higher yields than they have in the past."

He said there had been several large off-market sales in recent months.

"We just sold country at Lismore, of more than 320hectares, which will all be cropped.

"Demand for country is very strong, but with local producers doing pretty well, there's not much coming up which is available for purchase.

"Some of our dairy country, further south, is starting to be viewed for cropping, but there's not the same demand as around the Hamilton and Glenelg Highways, where the demand for cropping country is enormous."

"You only have to look at some other properties that have changed hands, and they are being bought by big cropping people," Mr Herrmann said.

"It's not unreasonable to think those who aren't selling are switching to cropping, as well.

Charles Stewart managing director Michael Stewart said he had noticed an increase in the amount of cropping, on properties being purchased.

But he said there was still strong demand for grazing properties, in light of the lamb and mutton prices.

He said the expansion of Berrybank was very positive news, for the region.