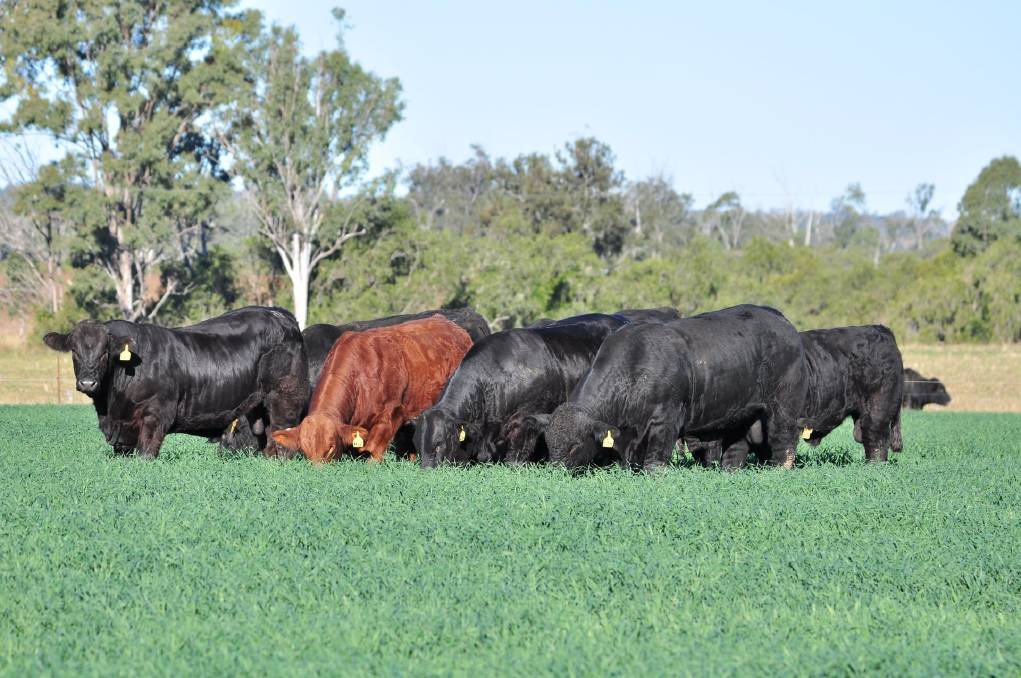 The average EBV for Limousin docility today would have been equal to the top five per cent of the breed 25 years ago.

The annual society-sponsored Northern Limousin Breeders Sale will be happening this year on Friday, August 7, from 12pm to 5pm.

The Australian Limousin Breeders Society is continually striving to enhance and consolidate the attributes of the breed, says society co-director and stud breeder Michael O'Sullivan.

Mr O'Sullivan said a revelation in this regard has been the change in the general perception of docility in the breed, which was considered a drawback of the Limousin 25 to 35 years ago.

"We were one of the first breed societies to introduce (in 1996) docility scoring and a docility estimated breeding value (EBV) in 2000. Since that time the improvement has been unbelievable," he said.

"The average EBV for Limousin docility today would have been equal to the top five per cent of the breed 20 years ago, which really shows how far we've come."

Mr O'Sullivan said the stronghold of the Limousin breed has always been their excellent hybrid vigour.

"The Limousin also possesses the F94L gene, a natural growth hormone, which has been proven to increase dressing percentage and yield. This provides a big advantage for crossbreeding purposes with both British and Tropical breeds as the F94L gene is passed onto the progeny, making the breed an ideal F1 option.

He said more and more people are also using Limousin-infused females in their herds with great results.

"Limousins are a great maternal female. Limousin bulls are no longer seen as exclusively a terminal sire. That's another string to the breed's bow."

As it was originally a horned breed, Mr O'Sullivan, said an area of great focus for the society in recent years has been on increasing the poll gene in Limousin cattle.

"We've managed to get the rate of stud calves born to between 85pc to 95pc polled over the last few years. A significant number of which are homozygous polled. For a European breed, we're leading the way in poll genetics. 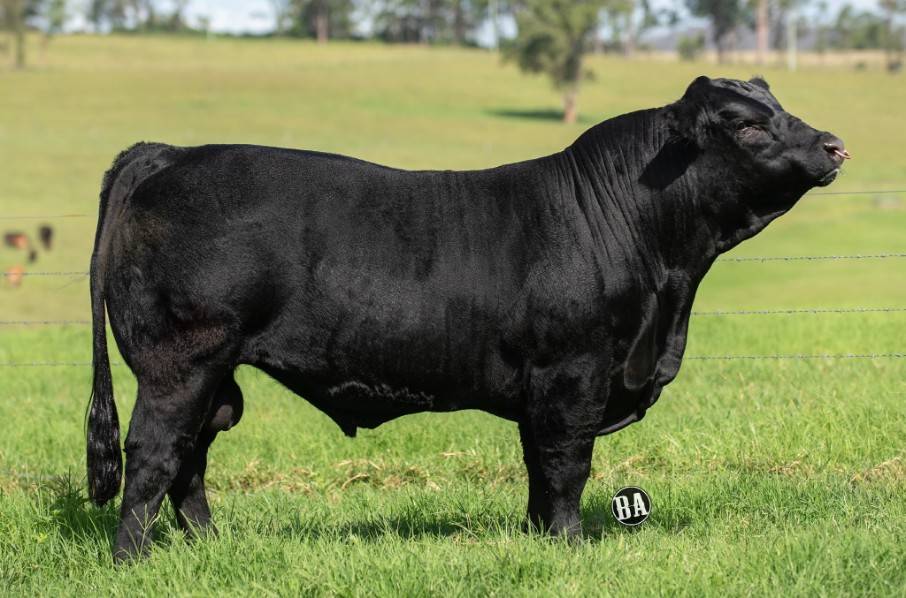 Warrigal Polled Aussie Made P23 was purchased by the Kellett family of Firefly to top the 2020 online-only Limousin National Show and Sale at $21,500. Photo: Branded Ag Marketing.

"We're also heavily focussing on carcase attributes to produce quicker finishing and easier doing cattle while retaining the established beneficial traits the breed is known for. The society is looking into doing more research and trials to get some updated accurate figures on feedlot and processor performance of Limousin cattle to help bolster these traits."

He said like many other breed societies, their membership numbers have stayed fairly static over the last few years due to climatic events such as the prolonged drought.

"We have 350 full members plus a strong junior membership base which includes more than 160 members. We're quite proud of our junior movement.

"Our Queensland branch hosts an annual youth camp in September, and on a country-wide scale, the National Limousin Youth Association holds the National Limousin Junior Show in July, though we had to cancel that this year because of COVID-19. Each of these events attracts close to 100 young cattle enthusiasts."

"Due to the remarkable gains we've had in improving the breeds docility, Limousins have become the breed of choice for a lot of younger people involved in the industry, they're utilised by many schools for cattle club programs and show teams."

He said Limousin and Limousin infused cattle have dominated the Royal show hoof and hook classes across Australia over the past decade.

During an awards presentation on the evening of Friday, July 3, a purebred Limousin team bred by Kevin and Sue Nettleton, Unison Limousins, Boyanup, Western Australia, was announced as the winner of the 2020 Harvey Beef Gate 2 Plate Challenge.

Mr O'Sullivan said there were 62 entries representing all breeds in the competition which assesses cattle performance through the grain-fed, MSA graded, domestic supply chain in Western Australia.

"This is the first time a purebred team has won the competition. In all 10 out of the 14 categories were won by Limousin or Limousin-cross cattle. It is a great result for the breed."

He said Limousin or Limousin-cross cattle have also been a constant fixture in the winners circle at the Merriwa Show Feedlot Trials over the years. 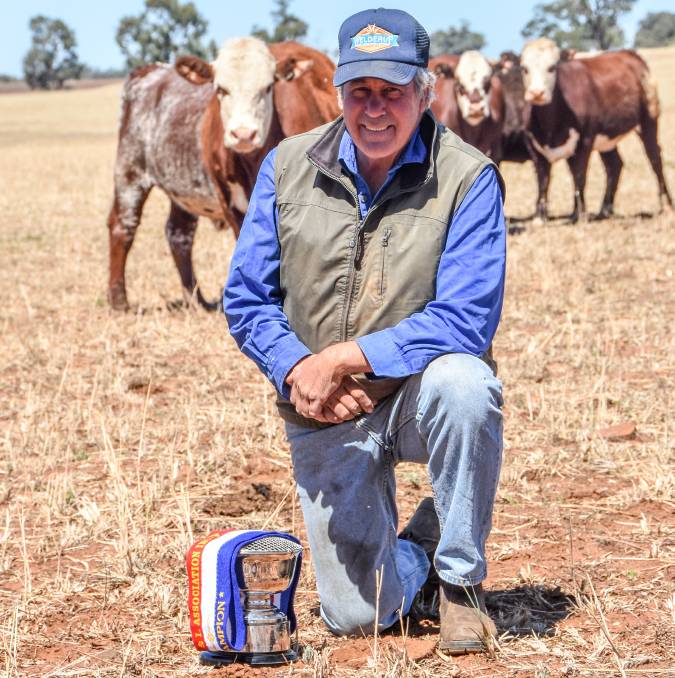 Limousin cross Shorthorn cattle entered by the Carrigan family, Merriwa, were named overall winners of the 2019 Merriwa Show Feedlot Trial. Paddy Carrigan is pictured with the trophy and their cattle. Photo: Kylie Raines.

"The 2019 competition was won by a pen of Limousin x Shorthorn cattle entered by the Carrigan family, Merriwa. Their winning pen also had the highest dressing percentage and highest profitability of all entries. This tremendous result followed on from pure Limousin pens being named the overall competition winner in both 2018 and 2017."

Mr O'Sullivan said while COVID-19 has pulled the society up this year in relation to events and sales taking place, from now until Spring a substantial number of bulls and females will be made available for sale, online, or from the paddock, from stud breeders across all states.

"Limousin and Limousin-cross cattle will be featured in all shows and competitions as restrictions ease and they come around again. We'll also be involved with Beef Australia 2021 in Rockhampton, and we'll have sites at Primex, Casino Beef Week and FarmFest as we always do."

He said the annual society-sponsored Northern Limousin Breeders Sale will be happening this year on Friday, August 7, from 12pm to 5pm.

"This year we conducted the Limousin National Show and Sale as an online-only event and it proved very successful. COVID-19 has made us explore different options some of which have gone quite well. For the National we had our three judges decide on the winners virtually which worked well, and the sale result was one of the best we've had in the last few years with bulls averaging $7444 while females averaged $6010."

Mr O'Sullivan said it's a tribute to what Australian Limousin breeders can achieve in relation to the strides made over the years with the breed on our shores.

"To take a breed with French origins, bring it to Australia, adapt it to our conditions, and develop it to what it is now is a credit to Australian pastoralists."

The story Limousins progressing in leaps and bounds first appeared on The Land.