The Guthries own Grampians Estate. 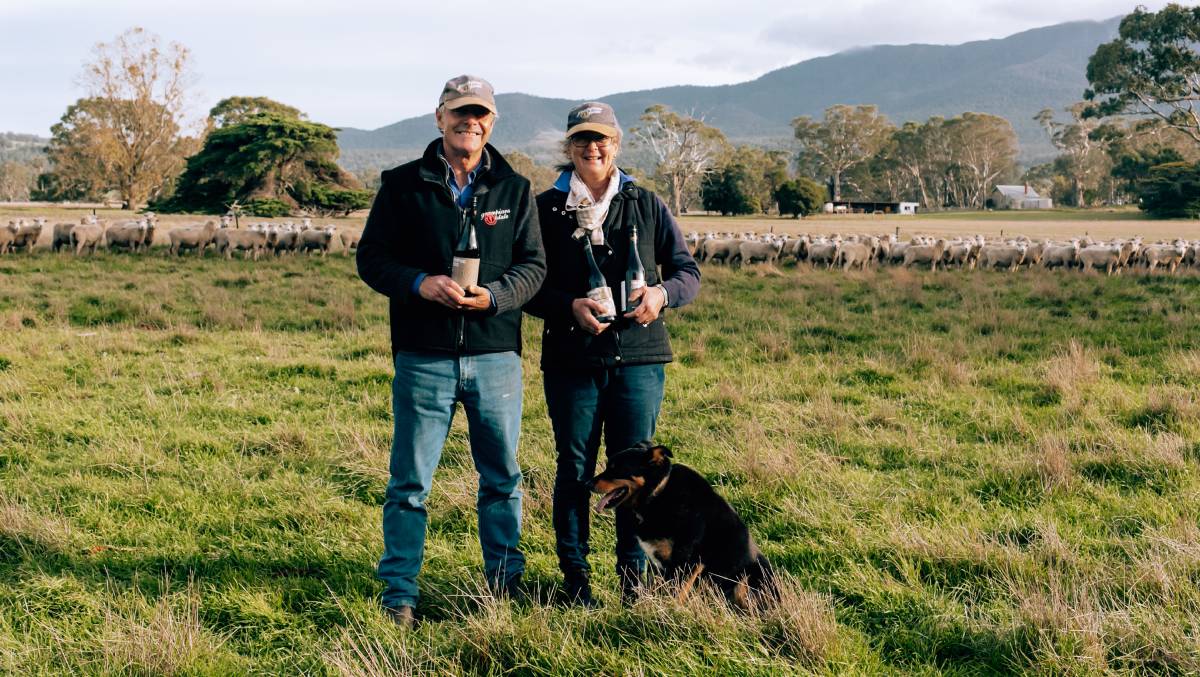 Grampians prime lamb producers Tom and Sarah Guthrie are not your everyday farmers.

For 25 years the couple have worked vigorously to establish a boutique vineyard and cellar door alongside their sheep operation by growing and using grapes from local vines.

So what is it like to run a sheep enterprise and grow grapes at the same time?

Well according to Mrs Guthrie it's quite a handful.

"We've had to move shearing because one year when we were trying to pick grapes and shear at the same time and it was almost impossible," she said.

Her husband Tom is the great-grandson of the late Western District pastoralist, Thomas Guthrie, who bought the Mafeking property on the north side of the Muirhead Range in 1927 as a drought reserve for his wool operation at Donald.

Interestingly, a book authored by Tom recounts how his great-grandfather bought 404,000 hectares in the Northern Territory as part of a settlement scheme in 1882 and sent 11,000 sheep from Donald on a 16-month 3500-kilometre journey inland.

The journey was led by the late drover, Wallace Caldwell.

The Guthries' connection to the land and wool production in Australia is the inspiration of a new collection of wine labels titled The Sheep Series.

The three wines feature labels designed by their daughter, Pollyanna, and aim to highlight and recognise the family's connection with the land.

While the new wines were launched only six weeks ago, Grampians Estate has a long association with the classic Australian 1926 painting Land of the Golden Fleece by Sir Arthur Streeton featuring Major Mitchell Plateau, the highest part of the Grampians after Mount William.

Coincidentally the painting itself was painted at Yarram Park, a neighbouring property to their vineyard where Mrs Guthrie grew up.

She said the new wine labels which featured a wool theme were a symbolic reference of their unique connection to the land through prime lamb production and wine making.

"Each wine has its own name and the names we use link back to the story of Tom's book," she said.

The wines Wool Classer, Fields Crossing and The Longest Drive feature a blend of grenache, shiraz and tempranillo with grapes grown from the Guthrie's and nearby vineyards.

The first vintage took place in 1995 and has gradually picked up pace over time with Mr Guthrie currently undertaking an online wine science degree with Charles Sturt University to perfect the art of wine production.

"Raising lambs and growing grapes does have some similarities," Mrs Guthrie said.

"They both require that intensity for nurture and care so having a vineyard is like having a big garden and the vintage each year is like your new lambs arriving."

In the prime lamb operation, the family uses Dorset rams over Corriedale ewes for spring lambing with 4500 lamb set to drop from July.

Corriedale rams are also used of the ewes for the self-replacing flock.

It's been a labour of love for the couple and their two children, Pollyanna and Ford, however, the journey has not been without hiccups along the way.

In 2006, the vineyard and farm, Thermopylae, Mafeking, was destroyed by bushfire which burnt more than 180,000 hectares and destroyed 25 homes in the region.

The Guthries' "nerve centre" including home, sheds, sheep dogs survived the blaze, but what took years to grow was destroyed in minutes.

Despite the fire, the family has continued to push on, rebuilding their operation and expanding to open a cellar door as part of the Grampians Estate label at Great Western.

It was only last week the family completed a half-a-million dollar extension at the cellar door to improve customer experience.

But like many small businesses who have felt the COVID-19 pinch, the cellar door is expected to remained closed to the public for the foreseeable future due to the pandemic.

While wine tasting is off the cards, online and phone orders are still accepted as the cellar door remains staffed during the pandemic.