Fifty one Australian White rams were on offer during the annual multi-vendor sale at Narrandera on account the Gilmore family, Tattykeel, Oberon and Josh Clinton, Camden Valley, The Oaks. 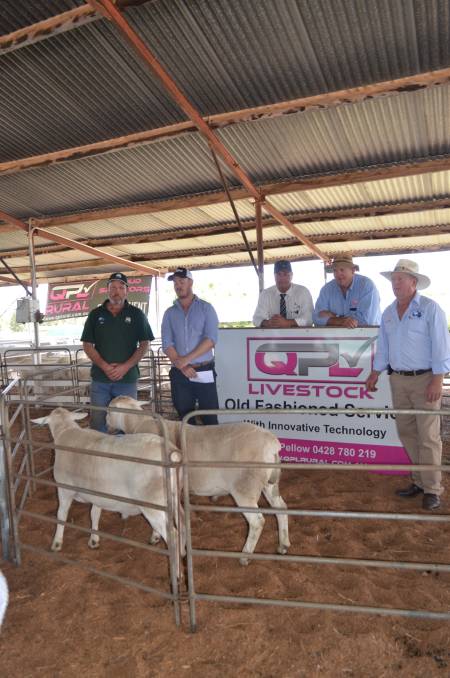 A total of 51 Australian White rams were on offer during Tuesday's multi-vendor sale at Narrandera on account of the Gilmore family, Tattykeel, Oberon and Josh Clinton, Camden Valley, The Oaks.

Bidding was quick and determined throughout the sale and a complete clearance was achieved with a top price of $5000 paid twice by repeat buyer Brock Sims, Springhurst, Victoria, for a pair of Spring 2018 drop rams from the Tattykeel draft.

Mr Sims was attracted to his selections for their evenness through the backline and rump with terrific balance and outlook.

"They had great carcase characteristics and I like the full shedding trait," he said.

Mr Brock said he preferred the Australian White breed for their quite temperament with his lambs turning off at heavy weights.

He is in an upgrading program and intends to run a pure Australian White flock.

Other good sales from the Tattykeel draft included one at $4100 as part of a selection of 12 rams purchased at a $3175 average on behalf of a Riverina-based client, two at $3900 purchased by Heathfield Farming, Naracoorte, South Australia in their draft of eight which averaged $3369, and sales at $3500 respectively to Douglas Manwaring, Condobolin, StockCo, Kyvalley, Victoria and Chris Collins, Walbundrie.

In the Camden Valley draft, a top price of $2800 was paid by repeat buyer Alan Anderson, Cobbity.

Mr Anderson had been buying rams from Camden Valley for some years and was very happy with their performance.

"I liked this ram for his overall traits," he said.

The story Aussie White rams hit $5000 at Narrandera first appeared on The Land.