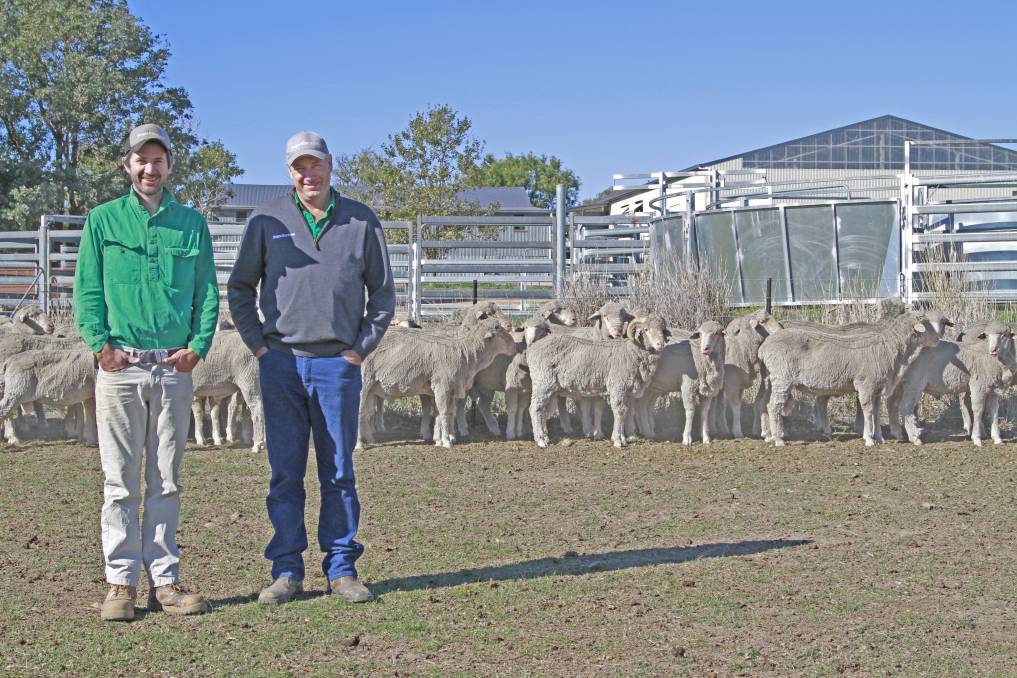 A BALANCED approach to breeding, with both visual and objective selection, along with regular benchmarking trials, ensures Bogo Merinos stays at the forefront of the breed and the wool industry.

The stud, initially established in 1996 at Bookham, NSW, is now based at Yass, sells 160 to 180 rams in its September on-property sale, and another 50 to 100 flock rams throughout the year depending on the market and season.

Since the acquisition of Bogo Merinos by Cavan Station five years ago, a separate nucleus has been set up within the stud to fast track genetics for the flock, while continuing to produce top end genetics for clients.

"The best possible genetics go into the stud, then the rams for the on-property sale, and we introduce 40 to 50 Bogo rams a year into the commercial flock," Cavan Station general manager Matt Crozier said.

The stud has a broad range of clients from Bathurst in NSW down to Hamilton in Victoria, focusing on a balance of profit driving traits including wool cut, carcase quality and fertility, through the use of modern genetic selection tools such as DNA pedigree and genomic testing.

Every animal in the 2000-ewe stud is DNA tested for parentage and they've carried out genomic testing for the past two years, which improves the accuracy of Australian Sheep Breeding Values (ASBVs).

"We use the data, but it's just part of the equation - it's another tool for more accurate selection," Mr Crozier said.

"Having better accuracy with ASBVs speeds up the genetic progress of our client's operations - the more accurate the data we provide, the quicker they'll advance.

"Those main profit drivers have always been the focus, and depending on our clients' management and environment, their commercial flocks are cutting between six kilograms and 6.5kg at 18-micron or lower on a 65kg to 70kg frame.

"In the early days of the stud those wool traits were the main focus but over the past five or six years we've concentrated more on growth and the carcase side, in response to market signals but also to improve weaner survivability.

"The carcase element to the Merino is important so we've focused on that but not to the detriment of anything else."

In the past five years Bogo Merinos has been selecting for the Merino Production plus index, and they've also continued participation in benchmarking programs, through sire evaluations.

They hosted a MerinoLink Central Test Sire Evaluation for 2017-drop rams, with a Bogo ram topping that trial, and they have another two rams in a group of 15 sires being evaluated in the same trial this year.

"There's also another one being run in parallel at Boorowa and we have a ram in that as well," Mr Crozier said.

"Our performance in sire evaluations has been very good, and it's a good way of benchmarking our balanced approach to commercially viable traits.

"That gives us reassurance that we're on the right track."

The stud also has its own full-time trial with a 10,000-ewe commercial flock, with the scale of that operation being a great testing ground for Bogo genetics.

The next big step for the stud is ceasing mulesing, by scoring breech wrinkle and breech cover at lamb marking and selecting plainer sheep for breeding.

"We started that in the stud flock and the commercial flock will have ceased mulesing this year," stud overseer Will Wragge said.

"We've been collecting that data over a five-year period so we can make better breeding decisions, focusing on the plainer sheep that are still hitting their KPIs and cutting a lot of productive wool.

"You can cease mulesing without losing production.

"Our clients are coming to us, saying they really think things are changing in the industry and they want to know what we're doing about it as their seedstock producer.

"We've found the majority have been pleased that we had a strategy and were actively working towards a plan to cease mulesing."