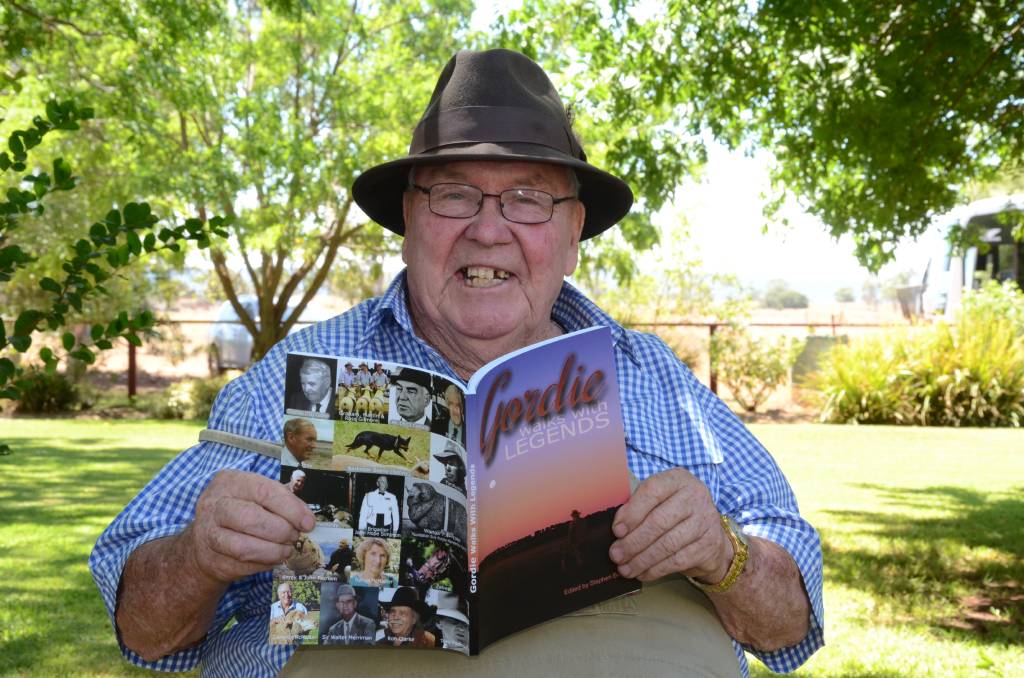 'Gordie walks with legends' - Gordie's tribute to those with whom he worked and considered outstanding personalities. Photo: Mark Griggs

Gordie was one of those rare people who are instantly recognised by one name.

Gordon Lindsay McMaster was one of those rare people who were instantly recognised by one name - Gordie.

In the Merino industry and around the Kelpie kennels he was a "legend before smoko", and his legacy will long be remembered.

His contribution was such that he was awarded an OAM for services to the Merino industry and the Kelpie breed in January 2009.

Gordie died peacefully in his sleep aged 84 on 24 April in Narrandera after a seven-month illness following surgery for a heart condition.

Born on September 9, 1935, Gordie was the third and youngest son of Bruce and Olive (nee Brewer) McMaster and grew up on the family property near Warialda where his great grandfather had purchased Croppa Station in 1885.

Upon completion of secondary school at Sydney Grammar School, Gordie's initial ambition was to play the drums in a jazz band.

Although he never lost his talent, that ambition was replaced when he was sent to Haddon Rig at Warren as a jackaroo under the watchful eye of manager Alec Ramsay.

Thus began a lifelong interest in the mystery that is the Merino sheep, a passion Gordie never lost and fervently passed on to those keen enough to understand.

He joined the fabled F.S Falkiner and Sons group of Merino studs on their property Zara near Wanganella.

It was there he met a lifelong friend and fellow Kelpie breeder, Tim Austin, who was jackarooing on Austin Wanganella and they would discuss sheep and dog genetics long into the night.

Working his way towards a career with Merino sheep, Gordie met Narnie Atkinson from Hillston and with the single-mindness for which he became renowned successfully wooed Narnie and they married in St Michaels, Vaucluse on September 21, 1960, where his best man was school friend Robert Boag.

They moved to Pine Lodge in 1963, a property near Coleambally and part of the complex on which the late Tom Culley bred his heavy cutting Wonga Merinos.

During his time there, Gordie was able to develop a reputation for sheep classing and after his first job he sent the client his bill.

"What did you charge, Gordon?" was Mr Culley's query.

"The same as Malcolm McLeod," was Gordie's very quick reply.

During the early 1960s, Malcolm McLeod was one of the leading sheep classer's in the country and a testament to Gordie's self confidence he felt able to charge the same rate.

All his life, Gordie referred to his old boss as Mr Culley, and used often say everyday he was classing Merino sheep he would think ... "what would Mr Culley do with this sheep?".

Such was his appreciation of being mentored by Mr Culley, Gordie strove to pass his knowledge on to succeeding generations of keen Merino breeders.

One who figures in the modern industry is Tom Kirk, studmaster of the Bundemar stud now sited at Condobolin, and he remembers Gordie's influence.

"Gordie had an unrivalled passion for Merino sheep and a need to pass it on," he said.

"Gordie's legacy will be the trail of sheep men and women, such as myself, who he inspired with his knowledge and know-how to make his mighty Merino a more productive animal."

In 1972, Mr Culley recommended Gordie for the position of client classer and stud representative at Mungadal, the historic property owned by Naroo Pastoral Compnay near Hay and managed by Fergus Fysh.

He purchased a small farm east of Hay, which he named Wyreema, after the Kelpie stud he inherited from his uncle, Stanley McMaster.

Gordie jammed more into his 84 years than most and among the memorable moments were his being a founding member of the Australian Working Kelpie Council and a leading instigator of the Riverina Merino Field Days.

A Churchill Fellow in 1980 and Life Member of the Condobolin Show Society, Gordie's contribution to the Merino industry extended across Australia, South Africa and New Zealand.

Pre-deceased by Narnie, Gordie is survived by their daughters Lyndsey and Anthea, their spouses and their children.

The story Remembering Gordie, unrivalled in passion first appeared on The Land.