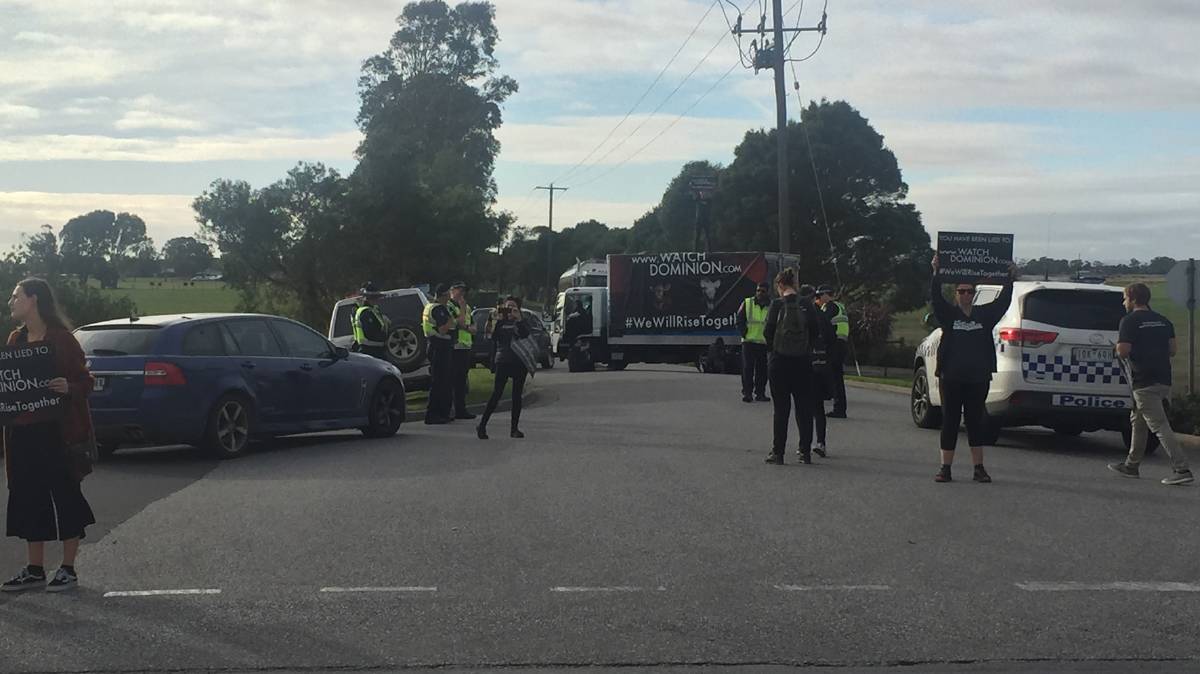 A small group of protesters set up a blockade at a Pakenham abattoir as part of a "direct action day". Photo by Peter Kostos.

Animal activists have partially disrupted works at a number of abattoirs across Victoria this morning.

Animal activists may have successfully disrupted traffic and some farming operations, but they've turned many Australians off their cause, Minister for Agriculture David Littleproud said.

"If the aim was to stop traffic they've succeeded, but if the aim was to convert Australians to veganism today then these people did huge damage to their cause," Mr Littleproud said.

"Fair minded Australians find this behaviour extreme. I  continue to call for calm. Invading people's properties is not the Australian way.

"I have no problem with any person's choice to be vegan - vegans eat plenty of farm produce too - but making farmers scared of property invasions and stopping honest people getting to work shows no respect and wins no friends," he said.

In a co-ordinated attack, animal activists have attempted to disrupt works at a number of abattoirs across Victoria this morning.

The actions at at least five abattoirs comes at the same time as activists blocked the busy Flinders Street and Swanston Street intersection in the city.

The activity came on the anniversary of the Dominion documentary.

Initially saleyards were also expected to be targets of the demonstrations however by 10am there were no reports of activity at saleyards around the state.

On Friday, Bendigo Livestock Exchange manager Andrew McCulloch said the threat of action on Monday would not change the normal activities of the facility.

"We are not planning anything special in response. We have policies and procedures in place but we have made Victoria Police aware of the possibility of action," Mr McCulloch said.

"I am confident that the policies we have in place regarding things like animal welfare will sustain any extra scrutiny.

The Victorian Farmers Federation advised its members that in the event of an unusual activity on their farm or intrusion on their property, the safety of them and their family, employees, and other on-farm visitors was paramount.