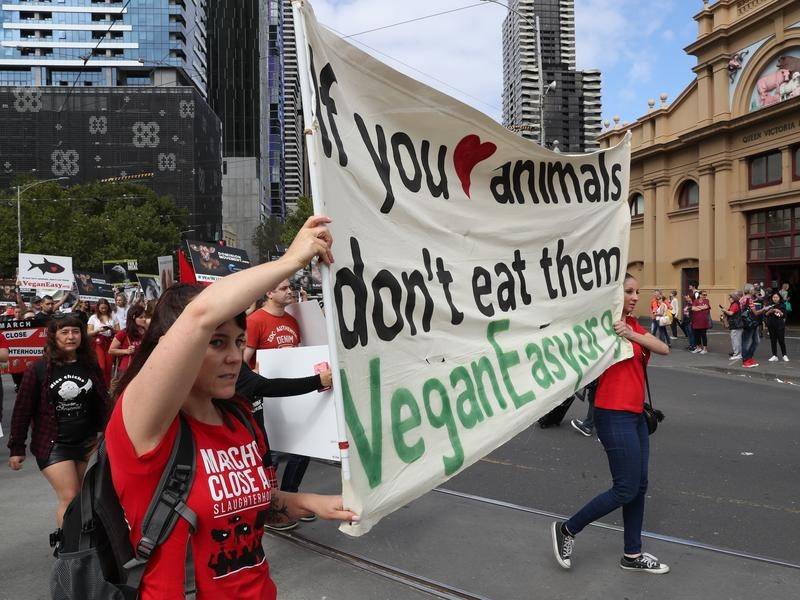 Vegan activists, pictured on Saturday, are staging another protest in Melbourne.

The city demonstration has blocked the busy Flinders Street and Swanston Street intersection and police are on site.

Animal rights protesters are blocking a major Melbourne CBD intersection during the morning peak hour while at an outer suburb, they have chained themselves to a truck.

The city demonstration has blocked the busy Flinders Street and Swanston Street intersection and police are on site.

CBD protesters are holding signs that say: "This is a peaceful protest" and "SOS animal emergency climate emergency".

Vans draped in black and emblazoned with the web address of a vegan documentary, are parked in the middle of the intersection.

Protests have also been reported in other regions with vegan activists at Pakenham chaining themselves to a truck.

The CFA is supporting police to free them.

In the city, some trams have stopped running while others are being diverted. Commuters are being told to consider the city loop train as an alternative.

Victoria Police said it's monitoring the protest to ensure it is peaceful.

"It is understood protesters have blocked the intersection of Flinders and Swanston streets using vehicles, which a small number have chained themselves to," they said in a statement.

"The safety of the community is our number one priority."

"Victoria Police respects people's right to protest peacefully but will not tolerate any anti-social behaviour or violence.

VicRoads has urged motorists to allow extra time for travel.

It comes after hundreds of animal rights activists rallied on Saturday, as part of a global protest, calling for an end to slaughterhouses outside Queen Victoria Market.