Jigsaw Farms is doing its bit to reduce carbon emissions on its farm. 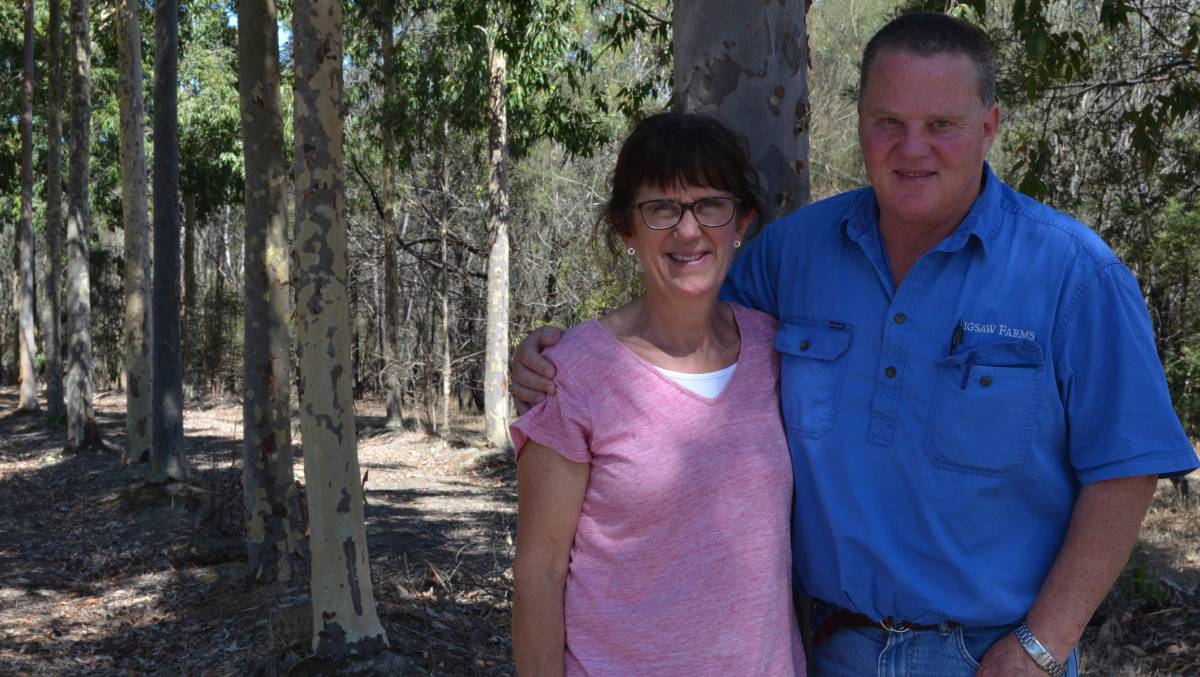 The pair, who are passionate environmental stewards, have integrated extensive agroforestry and revegetation plantings with grazing across their six properties, totalling 3378 hectares, near Hamilton.

They currently run about 20,000 fine wool Merino ewes, with 60 per cent running in a self-replacing flock and 40pc joined to terminal sires for prime lamb production, while 550 Poll Hereford and Angus cows are run in a crossbreeding operation, focused on hybrid vigour.

Speaking at a farm forestry field day organised by the National Farmers' Federation and the Australian Forest Products Association last week, they admitted that although the initial tree plantings more than 20 years ago were not motivated by reducing carbon emissions, it had become a significant benefit.

Since 1997, Jigsaw Farms has revegetated about 600ha with indigenous trees and shrubs or timber species, for permanent environmental plantings and farm forestry which will be replanted after being harvested.

The plantings include about 300ha of Spotted Gum which was chosen for its market versatility.

The timber lines are planted in wide shelter belts along the edges of paddocks, following the highly successful Potter Farms model, several of which have been incorporated into the Jigsaw Farms land aggregation.

"Our motive at the beginning was to have a diverse income source with the agroforestry while the revegetation was all about improving our on-farm biodiversity and soil health," Mr Wootton said.

"Shelter for stock welfare and productivity, especially at lambing and after shearing, has also been a key benefit along with a lift in winter pasture production through a reduction in wind chill factor.

"We see the planting of trees and shrubs as not taking farmland out of production but as actually lifting grazing productivity."

The farms' current stocking rate of 20 to 22 Dry Sheep Equivalents per hectare is double the district carrying capacity and in the top 5pc for the area.

When approached by University of Melbourne researchers to participate in a study looking at the offsets required to reduce the carbon balance on farms, they were keen to see how their intensive system would perform.

Against expectations, results from the University of Melbourne study, which was released last year, confirmed that Jigsaw Farms' emissions from livestock, energy use and transport were being offset by the carbon sequestered in their trees and soil.

The study found that with 20pc of the farm planted to trees, the stocking rates at Jigsaw Farms were carbon positive over a 25-year period.

"We did it as a very interesting example of where you had to go and the results showed that in this area, with high stocking rates, you need about 20pc of your farm planted to trees to offset the carbon you are producing," Mr Wootton said.

"If you went to another Western District farm with average stocking rates, it would be about 10pc.

"But moving forward, remaining carbon neutral is difficult to predict as emissions change depending on stocking rates, and tree growth rates start to plateau after about 10 years, so it gets you there for a short time."

Careful pasture management and an efficient and reliable water system are also key factors which underpin the operation's success, according to Mr Wootton.

"The best thing we do is grow grass and we've spent the past 23 years fine-tuning this with high fertiliser inputs and perennial pasture species."

The perennial pasture system currently offsets about one-quarter of emissions through soil carbon and this figure continues to grow.

"But the risk of using soil carbon to offset emissions is that if you have a climatic event and it gets very barren or we don't maintain our ground cover, we will lose it," he said.

"There is a fundamental challenge in high rainfall areas in getting trees in the landscape because it's viewed as competition with growing grass, that's why it's important to understand the co-benefits of trees."