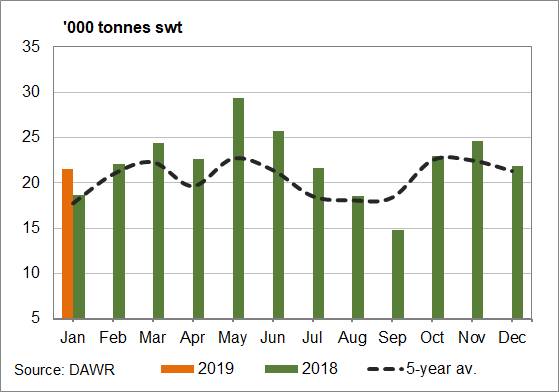 Lamb exports for January increased 15.6 per cent year on year, according to Department of Agriculture and Water Resources (DAWR) trade statistics.

The highest January volume on record was reported with a total of 21,541 tonnes swt exported (Figure 1). The boost came from record flows to the Middle East and US.

Australian lamb product to the Middle East totalled 6487 tonnes swt, the highest January total on record, 25 per cent up on January 2018 and 36 per cent higher than the five-year average trend.

Even stronger percentage gains were noted for the US, with the January 2019 lamb export volume of 5593 tonnes swt also posting the highest January figure on record, increasing by 35 per cent on January 2018 levels and 38 per cent above the five-year average for January. 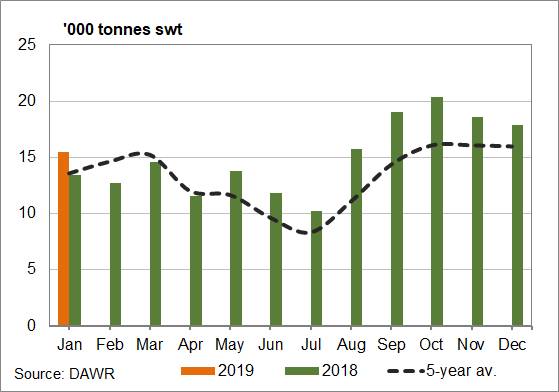 FIGURE 2: Australian mutton exports. Export flows of mutton were 13.7 per cent above the January five-year average.

Mutton exports out of Australia for January 2019 show a similar lift in volumes, increasing 15 per cent year on year to 15,485 tonnes swt (Figure 2). However, the significantly above-average volumes for mutton during January were limited to Asian destinations, namely China, Singapore and Taiwan.

Growth in mutton flows from Australia to China were up 18 per cent year on year for January to see 4805 tonnes swt consigned.

This is the second highest volume for January ever reported, and just a fraction short of the record of 4822 tonnes sent during January 2014.

Perhaps the issues faced in China regarding African Swine Fever (ASF) and the reports of nearly one million pigs being culled, are beginning to flow through to additional demand for alternative proteins.

It is early days yet, but it will be worthwhile to keep track of the ASF developments in China as the season progresses to determine what impact, if any, it is having on our export markets.