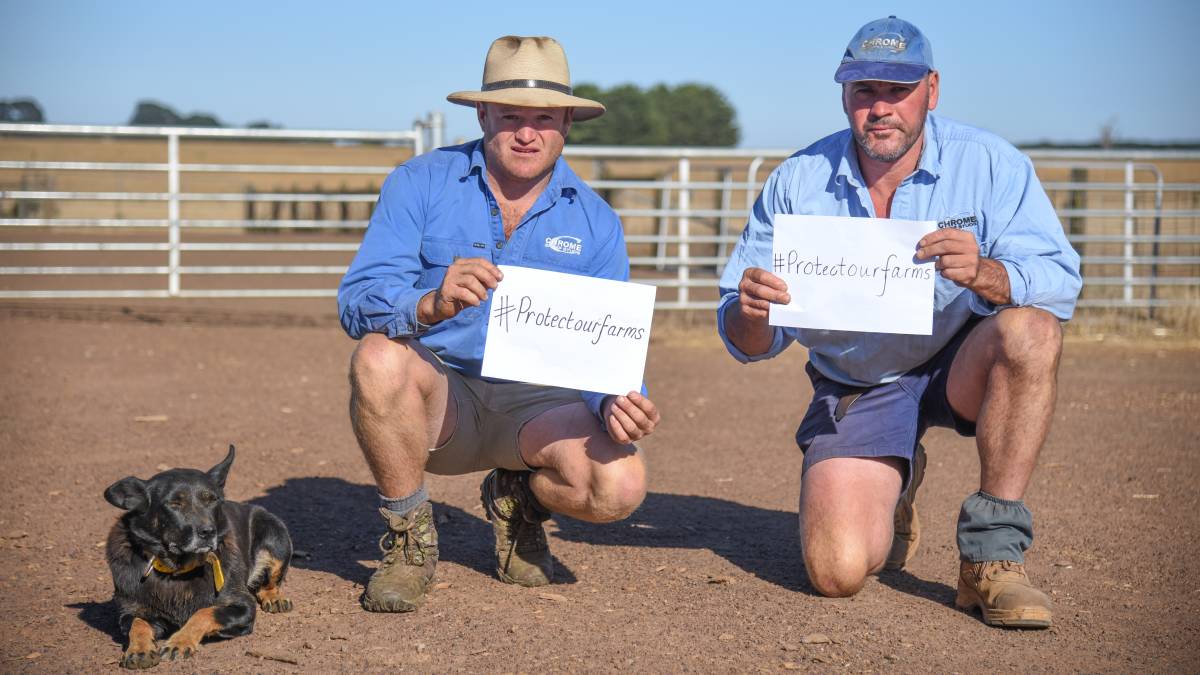 Chrome sheep stud assistant manager Hamish Thomas and stud co-principal Matt Tonissen, Hamilton, are calling on the government to do more in the wake of Aussie Farms' online map. Photo by Ruby Canning.

Farmers listed on the controversial Aussie Farm maps are outraged they have been portrayed in such a way.

‘Ill-informed’ and ‘disgraceful’ are just some of the words Victorian farmers have used upon finding their details on the controversial Aussie Farms map.

Made public last week, the map identifies a large number of rural and farming enterprises, as well as some saleyards, abattoirs and intensive production operations, across Australia.

Many farmers are furious that their personal information has been displayed on the map without their permission.

Chrome sheep stud, Hamilton, is one Victorian farm to appear on the map.

And stud co-principal Matt Tonissen said they only became aware of it after receiving a message from a stranger on Facebook.

Mr Tonissen said the information about Chrome on the map was misleading.

“The concern for us is that the photos uploaded on the site are not of our farm, but they give the impression that they are – and that’s far from the truth,” he said.

“We do our best; welfare of our stock is really important to our business, and these photos are far from everyday life on a sheep farm.”

He said it was an invasion of privacy, and the threat of trespass was concerning.

“These people are real extremists and they are openly declaring that they are prepared to break the law,” he said.

He said if activists were to break onto his property it would cause biosecurity problems.

He said Aussie Farms’ charity status should be removed.

Another prominent sheep producer in North-East Victoria, who appeared on the map but wished to remain anonymous, found out about their inclusion on the website by an industry acquaintance.

The sheep producer said her initial reaction to finding personal details on the map was “shock and disbelief”.

She described the map as “disgraceful”.

She said animal activists did not have any idea what happened on their farm and that animal welfare had always been a priority.

“There is no way as a stud that we should be on the map for animal activists in terms of animal cruelty,” she said.

“These people have no idea what we do on our farm; the whole notion is ridiculous.

“They have no right to even suggest we partake in animal cruelty, it’s just not correct.

“They have just randomly included [the farms]; it’s outrageous, they have no facts, no evidence.”

She said it was only because their property was on Google Maps that they could be included on the map.

She said the risk of trespass was a massive biosecurity risk for farmers who were vigilant about disease getting onto their farms.

They have requested their names and details be removed from the map website.

She said the government should take the website down immediately.