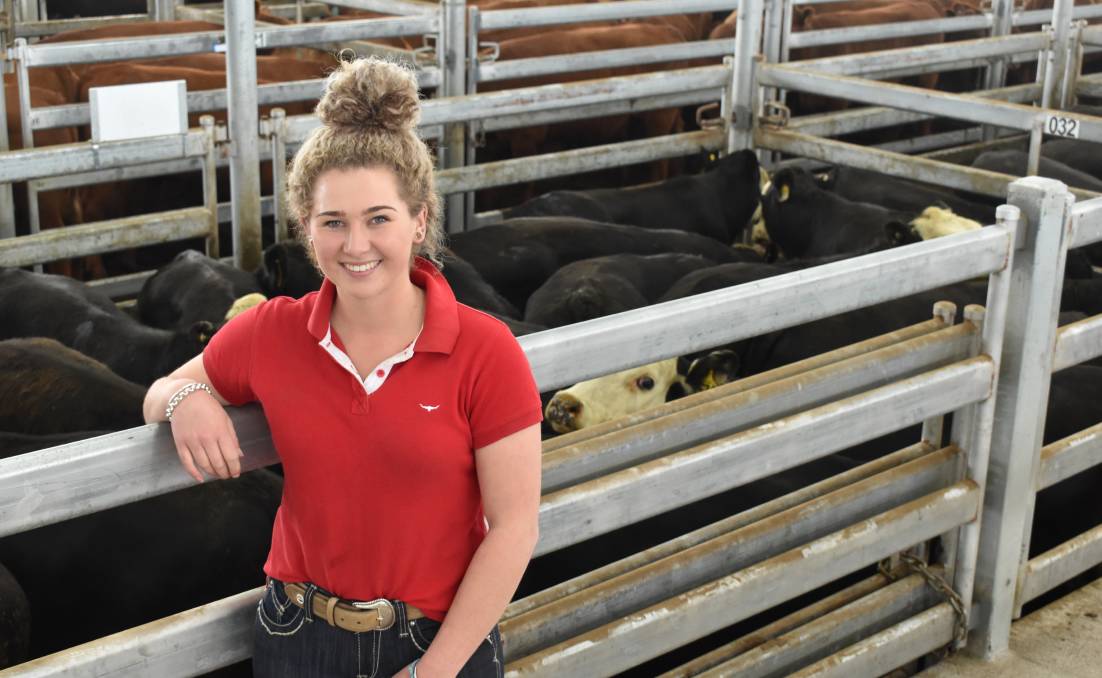 Passion is an often used word when talking about young people finding their way in any number of pursuits.

However a quick online search for the definition of passion reveals that, among other things, “passion is the fuel in the fire of action” and “without action, passion yields no worthwhile results”.

Action being the key reveals why 19-year-old Ruby Canning, Mortlake, has been able to achieve so much in such a short time in her field of agriculture and photography.

Never one to sit still, Ruby prefers to have multiple tasks bubbling away at once, and with plenty of future plans to think about.

Her list of involvements is long including: livestock and agriculture photographer, judge, cattle breeder, show parader, student and various jobs.

Ruby also has a clear vision of where she wants to be in an industry that she sees as exciting and offering numerous opportunities.

Beef seedstock production has been the cornerstone of her career in agriculture so far, coming from a family involvement of six generations, originating in Alberta Canada.

She is co-owner of Mavstar Simmentals alongside younger brother Jacob and along with parents Rita and Ross operates Maverick Simmentals.

Ruby said the cattle stud at Mortlake was established by her grandfather Peter Schembri.

Mr Schembri, who passed away five years ago, is at the top of the list for impact on Ruby’s career in agriculture and in particular cattle breeding.

“Pa was my best friend, my inspiration and forever inspired me to reach for the top with whatever I do. My brother and I established our Simmental stud from two original females from his stud,” she said.

She said Mr Schembri’s “love and passion” for the beef industry was contagious.

“I hope to continue to carry on his legacy and his appreciation of top quality stock,” she said.

Ruby said a serious car accident in 2017 that fractured her spine and was followed by 12 weeks of intensive care, had further cemented the importance of family, happiness and health.

Mother Rita’s support and “courage” during that time  was a major part of her journey, Ruby said

Aside from her parents other people in Ruby’s journey include Kerrie Sutherland, a lifelong friend of Rita’s, who was a great influence on her life.

Jill and Allan Furborough, Buchanan Park, were also great mentors and friends of the family for many years.

Ruby, her brother and family have around 100 head of cattle, including 30 purebred breeder at Mavstar Simmentals, plus composite cattle which were used for cross breeding in their upgrading program.

“We had many successes and great friendships build over the years showing cattle,” she said.

“I have competed in Junior Judging and Paraders competitions since I was 8 years old, and still to this day my greatest accolade was winning National Champion Beef Cattle Parader in 2016.”

Through Angus Australia, Ruby has been an active participant in many Angus Youth Roundups.

In 2018 she was a recipient of an Angus Australia Tertiary scholarship, and a scholarship to attend ALFA (Australian Lot Feeders Association) Beef Ex Conference.

Ruby’s study since graduating from school in 2016 has taken her to Lincoln University in New Zealand as a dual scholarship recipient.

She was the recipient of the Simon Gubbins Scholarship, and a Future Leader Scholarship.

“While I was unable to complete my tertiary studies there I enjoyed being part of a wonderful leadership program, and met many lifelong friends and had experiences which will be treasured forever,” she said.

Ruby began studying at the University of New England in Armidale, New South Wales in 2018 after transferring from Lincoln.

She is studying a double degree in Agriculture and Business with a major in marketing.

“This degree will not only let me follow my desire to have a more in depth understanding of the beef industry, but also to understand the business aspect of the industry along with international relations and exports,” she said.

“For many years we have exported cattle to Indonesia and China and I have always been interested with international relations and supply chain management.”

She would like to be part of an exchange program with an international university to gain experience on their livestock judging team and expand her involvement with meat judging.

Five years from now Ruby hopes a successful completion of her double degree will provide her with wider experiences of the beef cattle industry.

Ruby said to enhance her experience in marketing and supply chain management, she would pursue a place in a graduate program, in either the feedlot industry or meat processing sector.

“My dream one day is to have the opportunity to be involved within the Cattle Council of Australia’s Rising Champions awards.

She said it was important to learn about engaging with and educating consumers of about where their meat came from and to develop better consumer/producer relationships.

Ruby’s other passion is photography.

“I specialise in livestock and rural photography. I enjoy photography at shows, capturing the little moments. I have also had the privilege to work for Emily H Photography,” she said.

Ruby has been an official photographer at many major shows including at Royal shows in Adelaide, Melbourne and Sydney.